US Marathon runner can participate in Marabana

jose gabriel
in Technologies of Communication and Media
0 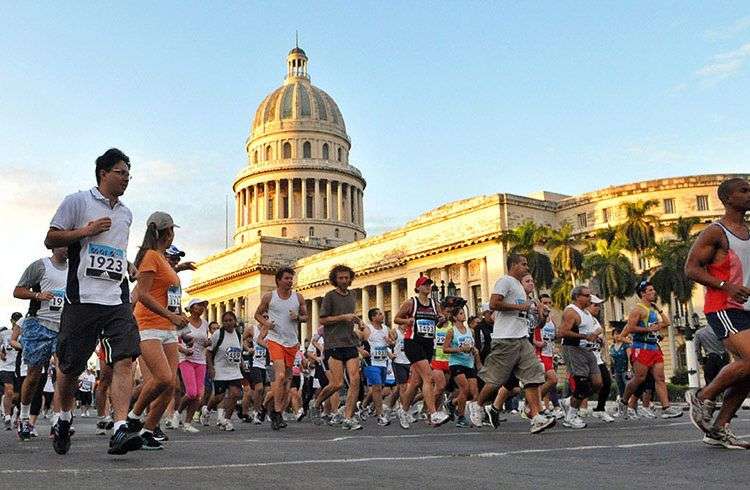 Since Marabana was first held in 1987 few American runners have been able to participate in the race / Photo: INDER.

American marathoners can travel to Cuba this year and compete in the marathon and half marathon in Havana, to be held on Sunday, November 16.

This will be possible under a special license for amateur sportspeople issued by the US Treasury Department to Insight Cuba, the leading provider in organizing people to people exchanges that allow United States citizens travel to the island.

The novelty has taken a new enhancement these days due to the launch by the company of its promotion “Win a free trip to Marabana” which is inserted into the 4 day Havana Tour, one of three tour packages offered regarding the competition.

To qualify for the award, candidates can visit the Facebook page “Insight Cuba-Havana Marathon” and enter the “Win a Trip” tab on top. The winner will be randomly selected and announced on Wednesday, October 1, 2014.

The first Marabana was held in 1987 and since then only a few American runners have been able to participate in this race until 2014, where 156 runners of that nationality may register at the competition under the new permit.

For Carlos Gattorno, director of Marabana-Maracuba project, the possibility of having marathoners from the United States in the starting line after many limited years by travel restrictions referred to in the policy of this nation to Cuba is a modest contribution from sports to the rapprochement between the two countries.

In an effort to learn more about how they made this possibility happened and the expectations it has arisen, OnCuba contacted Tom Popper, president of Insight Cuba, who willingly agreed to answer some questions.

How the Havana Marathon is inserted into the traditional Insight Cuba programs?

For years we have held a series of six tours of Cuba showing traveler the best of what we know about the island. Last month we created a new offer of specialized travels to Cuba. These are trips that have limited departures, as usually occur once a year, and are focused on a particular event or topic.

We currently have three of these specialized tours: the Havana Biennial in May 2015; our tour “Cuba by Land and Sea”, with four limited departures between January and March 2015, in which guests spend six days exploring Cuba on land, and then six other aboard the cruise ship Louis Cristal; and of course the Marabana tour this November.

How it was possible to obtain a special license that allows American marathoners to participate in the upcoming Marabana? Why Insight Cuba is specifically interested in this competition?

After training for a marathon which was intended to raise funds for a child with leukemia, I realized how full of energy and “hardliners” marathoners were. They travel all over the world just for the chance to say they ran a marathon in a certain place. They just love the opportunity to run.

In 2003, during a meeting in Cuba with the former director of North America and Puerto Rico area of the Cuban Institute of Friendship with the Peoples (ICAP), Javier Dominguez, I knew what Marabana was. I immediately imagined American and Cuban runners crossing the finish line hand in hand as a sign of mutual triumph, after the “suffering” of running 26.2 miles together. Sentiment and symbolism were personally compelling, and I wanted to see that image come true for runners, both in Cuba and in the USA So I went to see Carlos Gattorno, director of the marathon, which shared the same vision and together we committed to making it possible. We never imagined that it would take over 10 years to get it.

After the eight year pause in the people-to-people trips, and many other categories of travel, Carlos and I thought our time had come. However, in 2012, we were informed by the Office of Foreign Assets Control (OFAC) of the Treasury Department that a journey of American runners to the Havana marathon would be unauthorized under the people-to-people license we had then.

Then we applied for a license in a different category of travel, with the faint hope that we might receive permission to carry marathoners to Cuba in 2014. Happily on May 1 Insight Cuba was authorized to take 156 athletes under its new license for amateur sports.

In your opinion, what is so attractive and special in the Havana marathon for runners from the United States?

There’s something about the rhythm, speed and point of view in a city you experience when you’re running a long distance race. For most Americans, it’s been over 50 years since they could visit Cuba, and could not think of a better event to go slowly and effortlessly through the city for three or four hours.

What are Insight Cuba expectations in terms of numbers for this program? How many people you think would be interested?

OFAC authorized us to bring 156 American runners with the requirement that they had previously participated in a full marathon or a half marathon. We hope to be able to take 156 this year and more next. It would be a dream to see that this opportunity is given each year to Americans. However, how many are coming with us to run or accompanying them to enjoy the event, will be a real find.

So far how many American citizens, as runners or companions have been interested in coming to the marathon?

So far we passed the third of the way towards our goal.

Does Insight Cuba plan to continue to build sport-tourism links in its people-to-people programs? What other projects does it have in this sense?

For me the marathon is personally special from what I’ve told you, but I foresee Insight Cuba having a larger role in one day bringing Americans and Cubans together through sport. Sport and athletic competition continues to be the great global conduit to unite peoples, cultures and countries.

Kerry and the Illusion of a Monroe Doctrine

Cuba ... a stronghold of heavy metal?