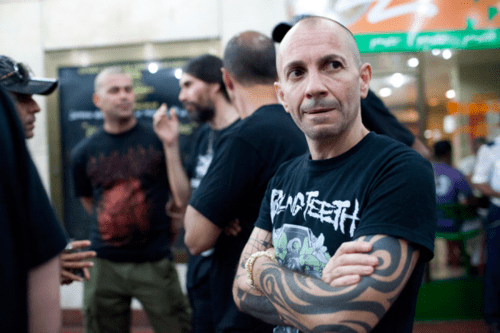 Who would say that Cuba, a country renowned for clichés such as tropical land of sun, salsa and mulatto, could become a stronghold of heavy metal? Well, French David Chapet not only says it, but argues it…

According to the French music promoter, guilt seems to be for the Brutal Fest, the festival created four years ago with the support of the Cuban Rock Agency, to shake the baffles with the music of the hardest metal bands. And it was so much acceptance that the organizers have had to make a winter and a summer edition.

With the summer release almost around the corner, Chapet OnCuba spoke about the peculiar taste of Cubans for the most raucous rock trends. Worth clarifying here there is also a festival dedicated to extreme rock, and many “provincial” groups bet on the death and black, with unintelligible vocals.

In the early 1990s groups that embraced alternative rock, with influences even from the country proliferated. Some made progressive rock, but most performed and shook manes in places like the patio de Maria or the Ganuza camping site, which hosted the first festival Metal City, back in 1990.

The twenty-first century began with much nu-metal, especially in Havana, some irreverent punk and much fusion. However, the geek-dinosaurs never became extinct, though sudden changes in musical climate, and now have found a haven in the Brutal Fest, whose success proves that Cuba, after all, is rock ‘n roll too.

The most extreme tendencies go straight to the body, brain and heart, and respond to a need to perceive, receive and express feelings. In an increasingly troubled world, marked by wars, oppression, misery, destruction, abuse, where the gap between the powerful and the people is increasingly abysmal, this music helps us to channel our disappointments, disgust, revolt, rejection claims. That is, it is a violent music in a violent world: extreme conditions, extreme responses, but artistic, musical.

The “geeks” in both Cuba and the rest of the world, we prefer to channel our violence through art, not burning cars in the streets and destroying public property. We are children of the Hippies and the Punk; we are pacifists and activists, use and consume music a little better to live in the world around us.

How this preference behaves in Cuba?

From the geographical point of view, in Cuba strongholds are concentrated in Havana, Holguin, Santa Clara and Camaguey. In particular, Havana and Santa Clara have developers and cultural institutions that support the rock in its diversity, but I do not think Holguin is more “extreme” than those of Ciego de Avila, for example, is only that those responsible for disseminating the culture also have given a space to rock music, hence they have a broader, more demanding and knowledgeable public.

What do you think of the current health of the rock movement in Cuba, especially after the change of leadership in the Cuban Rock Agency?

This change was necessary and that all promoters, musicians and audience, we are pleased with the new direction of the Agency, which shares our aspirations. We are now one, now there are no impositions or destructive factors. With the previous leadership, the movement was doomed in the short term; luckily we faced it intelligently and constructively, with solid and strong arguments.

Currently, the rock movement is made up of many bands across the country; they are still making good festivals like HG Metal (Holguín), Metal City (Santa Clara), the Athens Rock (Matanzas) and Rockmerías within the Romerias de Mayo. Still fanzines, webzines and newsletters are published, not as many as we would like, but they have not disappeared. And of course, our Brutal Fest is the only Metal Festival in Cuba with international and itinerant character.

I think the Brutal Fest was necessary, because thanks to the bands who visit us, Cuban musicians can exchange, learn and study on new trends and sounds of extreme metal that is in the world. In this regard, the Brutal Fest is like a laboratory for the audience and the musicians.

What impression does this festival leave in foreign bands that have played here?

Thanks to Brutal Fest, Cuba has become an important place for the heavy metal. Bands from all over the world have contacted me interested in Cuba: from Latin America to India, from Russia to North Africa and Europe, the constant excitement comes from the comments and stories of groups that have performed here. They never dreamed they would find both public and many metal bands here.

In particular they get surprised by the technical level of the Cuban musicians, and feel doubly impressed when they meet difficulties in forming and maintaining a band: get instruments, accessories, and rehearsal and performance venues.

In addition, here they find a dynamic and appreciative audience that always responds when the Brutal Fest travels to province. So far they have been about 40 bands, and many consider their stay in Cuba as one of the most powerful experiences of their lives. And for us too …

US Marathon runner can participate in Marabana