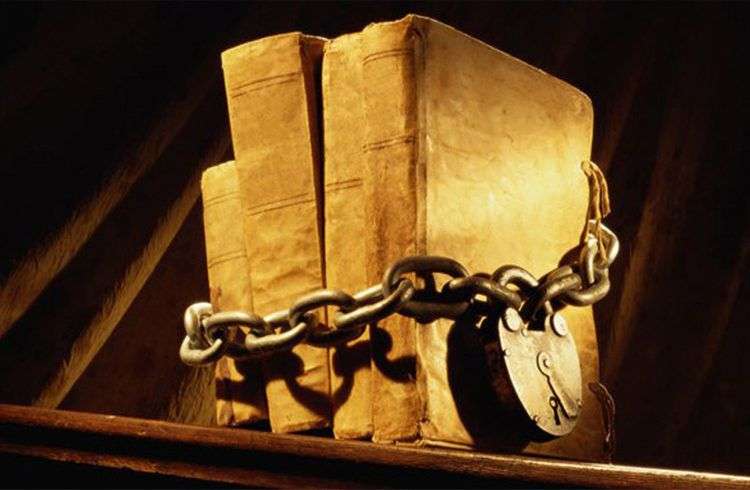 In the final chapter of ¨El estante vacio. Literatura y política en Cuba¨, Rafael Rojas lists a series of basic books that have not been published in Cuba. However, unpublished doesn’t mean unread. Rojas needs to be informed –though he is probably aware about it– that books are also sold off the record, laser printed, made in Cuba binds, rather than bookshelves they demand files to collect them.

Nevertheless, what’s the meaning of these underground publications? (Let’s keep in mind that the novel Herejes, by Leonardo Padura, was published off the record in Cuba long before than in Tusquets Editores, as if some domestic employee for the National Award had had access to the files in his PC.)

What’s the meaning of Richi’s digital library, which comprises more than 65 000 books? (You ask him for a book in the list and he emails it to you. For free. There is no better supplier. He meets his deadlines. He doesn’t spam. And his Cuban catalogue is something else. Where does he get “High Quality Print” PDF versions of El libro perdido de los origenistas (by Antonio José Ponte), El hombre que amaba a los perros (by Leonardo Padura), Chiquita (by Antonio Orlando Rodríguez), Animal tropical (by Pedro Juan Gutiérrez), etc.?)

What’s in the “Books” section in the so-called “Weekly package”, where happy bunches by the Rolling Stone and Art Experience: New York City manage to rise over the fallen leaves?

Just one thing: melt away. Deep melt away. Or a steroid in the library.Pure local warming.Writings out in the open that imploded due to scarcity, illegality, anarchy or ideology; alternative shadows that light fires and lurk in the dark, in that empty shelf of contemporary Cuban literature.

In order to give you an idea of the whims of that little off the record publishing world in Cuba (which is larger on the inside than on the outside), let’s make a critical review of a small sample of books by a publishing house in the municipality of Playa in Havana:

ONE: Te di la vida entera and La ficción Fidel, byZoé Valdés [Price: 200 Cuban pesos (CUP) / 8 Cuban convertible pesos (CUC)and 300 CUP / 12 CUC, respectively]. Many Cuban follow Zoé Valdés, as if she hadn’t got any older. Though it is true she had aprecocious youth, but one book only: La nada cotidiana. Zoé was very damaged by the success of that novel. Later on, in some way, she didn’t write anything new, she devoted herself exclusively to repeating her old clichés and answering immoderate demands of her followers. However, she is not only reduced to literature, it also includes politics. I mean: the supposed vindication of the novel as political genre, as if the writer was some sort of Tania Bruguera (Remix) in the Cuban literature. It is easy –perhaps too easy– to break that analogy. The first thing that sets Zoé Valdés apart from Tania Bruguerais gametes (“a mature haploid male or female germ cell which is able to unite with another of the opposite sex in sexual reproduction to form a zygote”)Tania’s marked Cuban art with fire. Let’s consider, first of all, that the Catedra de de Arte de Conducta also has illegitimate children. Yet, in Cuban literature, who are Zoé Valdés epigones? Noone that I’m aware of. Zoé is sterile, put necessary. A novel such as Te di la vida entera is reading material for people that wouldn’t read anything at all if it didn’t exist.

TWO: Morir en Cuba. Suicidio y sociedad, by Louis A. Pérez Jr. [Price: 300 CUP / 12 CUC]. It is a collective memory that links suicide and nation. The absence of cubens is suicide from the black whole of homeland historiography seems to have made a too large room in the subconscious mind of Cuban historians, anthropologists, essayists, ethnologists and writers. In 1906, Fernando Ortiz quoted a thought by criminologist Enrico Morselli: “we must welcome the increase of suicide rates, which implies an improvement of civilization”. Right away I recall Miguel Collazo, Raúl Hernández Novás, Reinaldo Arenas and Calvert Casey. Mostly, I recall Ángel Escobar and that poem, “El escogido”, in which his worst nightmare was “not to be able to escape from knowledge”.

THREE: Vidas para leerlas, by Guillermo Cabrera Infante [Price: 200 CUP / 8 CUC]. This is a volume were biographers revealed Nicolás Guillén singing to Stalin: “¡Stalin, que te proteja Changó y te cuide Yemayá!” (Stalin, may Chango protect you and Yemaya watch over for you!); the uterine phosphorescence of a Virgilio Piñera that climbed the empire State as King Kong: “literature is about gays, and if we are going to talk about gays: there is me”; Novás Calvo final via crucix: insanity, disability and senile idiocy: “At a unusual point I found myself talking to Lino directly […]. It didn’t seem to know what Cuba was”; US poet Allen Ginsberg writing love letters –letters that did got lost– to Commander Ernesto Guevara: “I’d really like to sleep with him”, he stated. It also portrays Calvert Casey committing suicide and, among other interesting elements, the behavior of punk duet Lezama-Piñera behind the scenes.

FOUR: Fidel y Raúl: Mis hermanos. La historia secreta. (Memorias de Juanita Castro), by María Antonieta Collins [Price: 300 CUP / 12 CUC]. I think there is no need to point out this is a paparazzi book. Underclothes. It is gothic and familiar and a Victorian thriller written as if the History of Cuba was but a chapter of Gossip Girl. XOXO, Gossip Book.

The truth is that while these underground publications are in a boom, the more reluctant we become regarding any generalization on how unknown our exiled literature is. In 2009, it could be said –as Rojas noted– that “in Cuba, the books and authors sold are those edited by the State”. During the early 2013, we had evolved into some sort of furtive and decentralizededitorial self-employment. Are off the record books sold all over the country? Yes, fortunately. Because time has gone by since that mythical: “the Revolution doesn’t say believe, it says read”.

A detail perhaps more digressive: during the long nights I spent transcribing the inventory of tittles published by anonymous publishing-houses, I had two dreams with a note of nightmares. Half asleep in front of the printed list –half somnambulistic, half zombie–, the first one was paranoid: there, I found out I was in fact Cuban artist Alexis Leyva, Kcho, but I wasn’t throwing bricks in the shape of boats downtown at the Old Square but rather forbidden, non-publishable books; and that it was a big fake, a plot to watch closely those who would pick up novels by Carlos Victoria, essays by Antonio José Ponte and Rafael Rojas, poetry by Lorenzo García Vega and other exponents of insane bibliography; and all that happened while an almost human voice whispered: “it’s Kcho…, it’s Kacho…, who else could it be?”.

The second dream was even worse: all of the sudden K officials arrived to perform an exorcism. There were weird and ancient things and rituals. For instance, a K official hit three times –with a silver crucifix– the last book by Ivan de la Nuez in order to get demons out of it. “The communist manifesto”, he read and right away yelled: “evil dog, to hell”. I recall having thought of a movie by David Fincher, with Morgan Freeman and Brad Pitt, about a serial killer that after reading some “satanic” books, used the bodies of his victims to preach. I recall having thought, exactly, of a good scene in which veteran William Somerset (Freeman) tells young and ambitious detective Davis Mills (Pitt), that the FBI had been connected to the libraries for years and was keeping records.

– They are monitoring Reading habits – answered Freeman–. There are certain books “marked”. Books on nuclear weapons… Mein Kampf. If you take out a marked book, your records go directly to the FBI.

Obviously, Somerset was referring to the monitoring when supposedly the final goal justifies the means used to achieve it. But in terms of literature, is there actually such thing as illegality?

Right there awoke with my own scream.