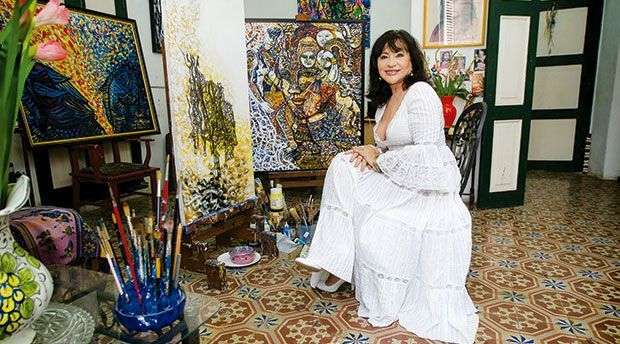 Zaida del Río is like her artwork: surprising and unexpected; for one thing, she refuses to take a common, hackneyed approach to anything. Her work expresses and exudes a deeply-rooted Cuban-ness, with a touch of the universal.

Del Río, who hails from the central Cuban province of Villa Clara, is a woman who, using dissimilar media, has become one of the most important artists of the so-called ‘70s Generation, and the work she exhibits is solid, identifying and distinguishing her.

A painter, engraver, ceramicist, illustrator, muralist, and poet, she has shown her work in well-known galleries and other spaces in countries including the United States, Puerto Rico, Poland, Denmark, Romania, Norway, Colombia, Czechoslovakia, Yugoslavia, Canada, Holland, Sweden, Spain, Venezuela, Algeria and Japan, and she has participated in every edition of the Havana Biennial.

In an exclusive interview with OnCuba, she says she was “very restless” as a child, and she had a penchant for singing, painting, theater, and “everything that had anything to do with art.” For that reason, in 1967, when she responded to an announcement for the entrance exams of the Cienfuegos Provincial School of the Visual Arts, they immediately notified her: “I had luck and opportunity. If it hadn’t been for that historic moment, it would have been impossible for me to leave the remote place where I was living.” After her graduation, she enrolled in the National Art School (Escuela Nacional de Arte) in 1971. “I had never been to Havana, and it was a real discovery of life in the capital, learning about everything, and having the possibility of meeting very talented colleagues. It was a huge step in my life, because I began to see really good films, enjoy contemporary dance, see Alicia Alonso and the great ‘jewels’ of ballet dance; the concerts, theater,
literature, exhibitions, museums, the whole cultural phenomenon of those years…a whole world opened up for me.”

She continued her studies, and from 1982 to 1987 was at the Higher Art Institute (Instituto Superior de Arte, ISA), where she graduated with a degree in engraving. “I enjoy every technique, and I have worked with them all; I have done lots of xylography (engravings on wood) and lithography (engravings on stone or metal). Right now, though, I am doing silk-screen printing. With time, other professional and personal needs come up, and now I am painting more. I am doing more sculptural ceramics, jewelry design, and fashion shows, and on many occasions I have adapted my characters for dance, anywhere where I can leave my hallmark.”

She also graduated from the National School of Fine Arts, and her time there allowed her to “explore other cultures and experiences,” to hold important exhibitions throughout Europe, and to visit museums, travel around and become known. “That whole experience is essential for artists, because we cannot forget that we live on an island, and at that time there were not as many possibilities as there are now for traveling and being up-to-date about what was happening in the world of art. It was also a time for me to challenge myself in other contexts.”

Zaida’s work came to the Museo Nacional de Bellas Artes (National Museum of Fine Arts), the mecca of Cuban art, in 1978, thanks to a solo show of her drawings (most in pencil) called Narraciones (Narrations). Today, she says, some of those drawings—together with newer ones—are part of the museum’s permanent collection. Her work has been awarded at the Tenri (Japan) and Cairo (Egypt) biennials, but for Zaida, the most important thing, “the magical thing is to encounter different cultures. Everything nurtures me, and any place I go feeds my spirit. There are different ways of assimilating the historical/cultural legacies of the world into an inner universe, an exchange with what one has experienced, based on the fact of being artist who is conscious of her Cuban-ness, with an eternal need for feeling like I am part of a whole,” she says.

As part of her intense, unstoppable career, she has illustrated more than 15 books, work that she values highly, because “it is an error to minimize books. Illustrating forces you to interpret—visually—what the writer does,” and she emphasizes that, likewise, making the cover of an album is a job that is “beautiful and respectable.”

Her work is basically figurative, because “the human body always interests me,” although she surprised everyone a few months ago with an exhibition of marinas that, she admitted, was a “shift” in her career. Now she is working “on other ideas.”

Zaida has gone through many stages: her initial one, very rural and bucolic; then the woman and horse, fused into a single body; then came her circus characters, a personal tribute to Commedia dell’Arte (Italian comedy); subsequently, it was the signs of the zodiac, tarot, African-based religions, precious and semi-precious stones, Bach’s flower remedies, pyramid energy, Christianity, tattooed bodies, painted objects, portraits of women in history, peacocks—a tribute to the colonial patios of Old Havana, Hindu dance, and Buddhism, because everything depends on “your state of mind and the knowledge that you acquire.” However, the bird-woman is a recurring theme: “It is a figure that is me, myself,” an image that she has adapted to canvas, sculpture and performance. She especially enjoys working with large formats, and while a considerable part of her work is in black and white, “now I am using all the colors, because I love color, and lines, which are fundamental to my work.”

Having a studio/workshop in Havana’s historic district has “completely changed my life,” and she enjoys “walking down these streets and relating to people and everything that goes on here. It is a joy to see how it has evolved, little by little and through the years. I feel like I am an important part of this project and of all of the cultural life that takes place here.”

For Zaida del Río, painting is living. “I observe everything around me: the lights, colors, lines…a painter lives in a state of constant surprise.” And perhaps one of the great mysteries of her work lies within that capacity for surprising herself and surprising us.

Writing on the fly