Federica Mogherini and Bruno Rodríguez met in Brussels to discuss bilateral relations and the latest events in the region. 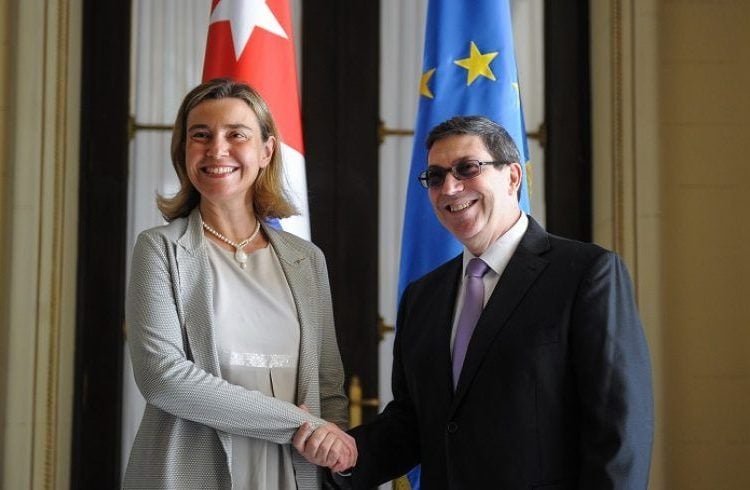 The High Representative of the European Union (EU) for Foreign Policy, Federica Mogherini, and Cuban Foreign Minister Bruno Rodríguez during an official visit to the island made by Mogherini in 2018. Photo: EFE.

The High Representative of the European Union (EU) for Foreign Policy, Federica Mogherini, and Cuban Foreign Minister Bruno Rodríguez expressed this Friday their rejection of the activation of Title III of the U.S. Helms-Burton Act and addressed the next steps.

Mogherini and Rodríguez met in Brussels to discuss bilateral relations and the latest events in the region, according to a statement released by the European External Action Service (EEAS).

The U.S. decision to end the suspension of Title III of the Helms-Burton Act was on the agenda of the meeting, and both parties said it was unfortunate.

This regulation allows filing lawsuits in U.S. courts against foreign companies with interests on the Caribbean island, which have benefited from land or property expropriated after the 1959 Revolution.

“Both the EU and Cuba believe that the extraterritorial application of the law is contrary to international law,” said the EEAS, which said that Mogherini and Rodriguez “exchanged views on the next steps.”

The EU has already advanced its intention to apply the “blockade statute,” which prohibits the application in EU territory of sentences in the United States on Title III and allows defendants to receive compensation in European courts.

Neither does it rule out a possible claim before the World Trade Organization (WTO), a measure to which the European bloc already appealed when the Helms-Burton was approved in 1996 and that was not withdrawn until Washington committed itself to keep frozen the aforementioned Title III.

Another issue they addressed was the situation in Venezuela, where “there is an urgent need to promote a peaceful and democratic solution to the crisis.”

The EU diplomatic service stressed that relations between the EU and Cuba have been strengthened through the agreement of political dialogue and cooperation, the first bilateral treaty between the parties.

“Both the high representative and the minister expressed their satisfaction about its progress,” it said.

They also discussed the preparations for the next meeting of the EU-Cuba Joint Council, scheduled for September.