The U.S. president praised the Brazilian leader, who has been described as the "Trump of the Tropics." 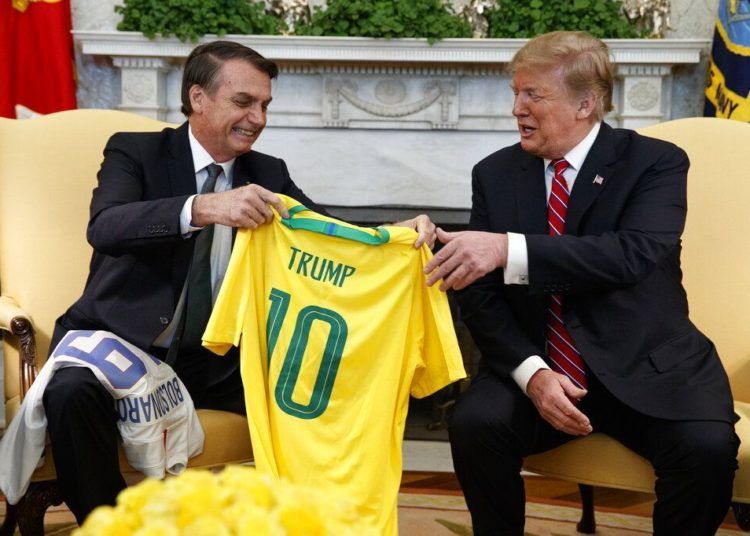 U.S. President Donald Trump praised Brazilian President Jair Bolsonaro on welcoming him to the White House last Tuesday, saying that the man who has been described as the “Trump of the Tropics” has done “a very outstanding job.”

Trump said that Bolsonaro had conducted “an incredible campaign” and that he felt “honored” that it had been compared to his own victory in the 2016 U.S. general election.

When starting a joint press conference later, Trump predicted that both will have “a fantastic working relationship” and that they have “many points of view” in common.

The two leaders were expected to discuss a number of issues during their first meeting, such as the expansion of trade relations, the increase in U.S. private investment in Brazil and the current political crisis in Venezuela. Both leaders are fierce critics of Venezuelan President Nicolás Maduro.

Brazil, the largest and most populous nation in South America, has sought to become a “great non-member ally” of NATO to facilitate the purchase of U.S. weapons and reduce the barriers to military and other cooperation with the United States.

Days after taking office on January 1, Bolsonaro, a former army captain, said Brazil would consider allowing the United States to have a military base in the country, as a way to counteract Russian influence in the region, in particular in relation to Venezuela.

That statement was roundly criticized, even by former military, and the government recanted. Even so, Bolsonaro regularly expresses his admiration for Trump and frequently says that closer ties with the United States are key to Brazil’s future.

“I admire President Donald Trump and we will certainly work to achieve shared interests,” Bolsonaro said this Tuesday, adding that just as Trump “wants to have a great United States,” he also wants to have “a great Brazil.”

As a sign of friendship, the two presidents also exchanged soccer jerseys.

Bolsonaro replaced a leftist president who sometimes had a tense relationship with the United States. In 2013, the revelations of Edward Snowden showed that the National Security Agency had spied on the talks of then President Dilma Rousseff, which damaged relations between the two countries.

The electoral campaign of Bolsonaro, due to his insurgent methods and extensive use of social networks, has been compared with Trump’s 2016 campaign. Like Trump, Bolsonaro presented himself as a “defender of the people” against “the elite” and ranted against any negative coverage labeling it as “fake news.” And just as Trump exclaimed “United States First,” Bolsonaro adopted the slogan “Brazil First.”