Although the Democrats did not need to win the influence of Donald Trump dragged the Cuban-American Republicans to sweep away the Democratic candidates in local elections. 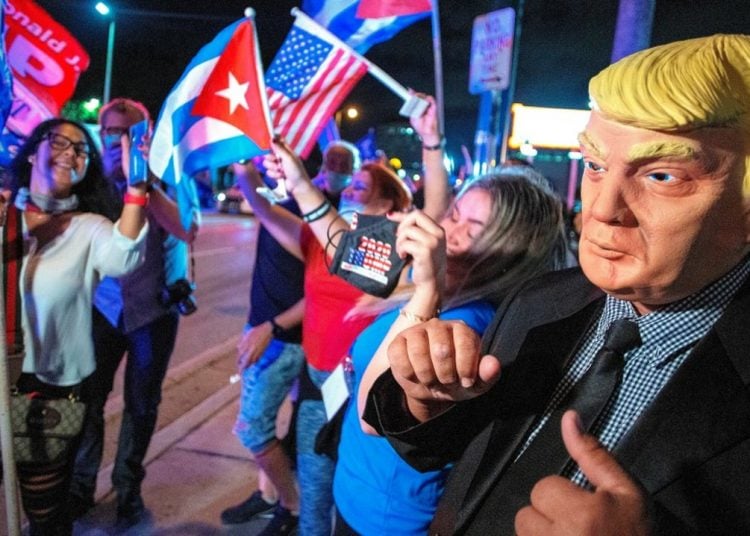 Cuban-Americans celebrate the Democratic defeat in Florida in front of the Versailles restaurant in Miami. Photo: Cristobal Herrera / EFE

He came, he saw, he spoke, but he couldn’t make it. Although it was known that President Donald Trump had his traction in Florida, among the opposition hosts there was hope that former Vice President Joe Biden could regain the state.

This did not happen, the president obtained 51.24% at the state level and Biden 47.85%. This places the victory protected by the rural vote, its traditional breeding ground. But in an urban area like Miami-Dade County, it was the other way around. Trump lost by 45.98% and Biden won with 53.31%. No Republican has won the presidency in Miami-Dade since 1988.

But the most important thing, in Cuban-American terms, is that Trump’s victory dragged down the defeat of the Democratic vote at the local level. Democrats lost almost every vote for councilors, state representatives and senators, judges, chiefs of police. The only truly significant local victory was that of Daniella Levine-Cava, who as a rookie Miami-Dade County Commissioner defeated the veteran Republican operative, an old local political fox, Esteban Bovo, who also as a county commissioner tried to get to Mayor. It was a historic moment.

For the former mayor of Hialeah and now an analyst, the Democrat Raúl Martínez, with whom Bovo began his political career decades ago, Levine Cava’s victory is the result of “the falsity of his personality, which does not deceive any more, since when he was in the county he did not care about people’s lives. What is he going to do in the mayor’s office? He no longer fools anyone” said Martínez in a comment on Caracol Radio 1260AM.

“To all the women and girls who have been told that their dreams are too big, I hope the results of last night make it clear that they can do anything they set their minds to. And for everyone in our community who has been waiting too long for the mayor to listen to you, I hope you can rest easy today knowing that you will finally have a voice in the mayor’s office” the new mayor commented in a statement sent to OnCuba.

On the other hand, Trump’s influence in the locals was so strong that in these elections the Cuban-Americans ended up recovering the two-thirds of federal congressmen that they lost in the contest two years ago.

Communicator María Elvira Salazar and former Miami-Dade Mayor Carlos Giménez conquered districts 27 and 26, respectively. The first achieved it by a margin of just over 4%; it was against veteran Donna Shalala, which was a surprise because Salazar is a novice in politics and who, clearly, bet on her recognition among the Hispanic electorate for her work on television.

Something similar happened with Giménez, a little more than 4% difference and also against Debbie Mucarsel-Powell who had held the position since 2018.

This Republican victory was attributed by analyst Mauricio Pasariello to the poor work that the Democrats did in South Florida and the success of the Republican campaign of falsehoods about the alleged socialist and communist connotations of the Democratic candidates. This Republican victory raises some expectations about whether the two new congressmen are going to maintain some kind of independence or join the “hardcore” Republican in the House of Representatives in Washington. For now, Salazar has said that she does not share the Republican plans to end “Obamacare”, saying that everyone must have their health plan and must seek “other alternatives”.

Trump’s victory was particularly incisive in rural areas, in particular in the northwest in the area close to the continental south of the country, the old southern areas of civil rights were violated for centuries, racism and slavery prevailed, and only since the 1960s democratic society began to penetrate.

But even though Biden won in urban areas, a ghost hurt him badly, and that, according to analyst Pasariello, was the worst of the campaign in Florida. The Republican campaign to convince the poorly enlightened electorate that the Democrats with communists and socialists hit bottom. “ The Democrats did nothing to combat that infamy. Who can believe in that? ” He said.

According to the political strategist Sacha Tirador, with extensive experience in the state and South Florida, who has led both Democratic and Republican campaigns, “ when one side throws a lie, you have to respond immediately and forcefully. The Democrats have done nothing. They stood still. That is incomprehensible ” she said.

At the end of the day, as Biden did not need to win in Florida, the state lost its political appeal somewhat, it did not carry all the weight attributed to it in the campaign. But the weight of Trump’s influence was felt with the debacle of the Democrats in the Cuban-American electorate and the local and state precincts.