The Center for Molecular Immunology in Havana assured that this new test will consolidate the scientific evidence that supports the effective inclusion of the monoclonal antibody Itolizumab in the Cuban protocol for the treatment of the disease caused by the SARS-CoV-2 coronavirus. 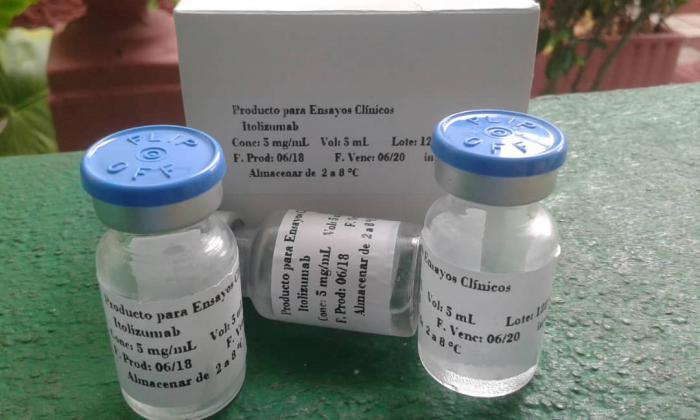 The Cuban drug Itolizumab used in the treatment of COVID-19. Photo: Courtesy of CIM / Granma

The Cuban drug Itolizumab developed together with an Indian company, received authorization to begin a phase III clinical trial in patients with COVID-19 in the United States, Mexico, and Brazil.

The news was announced on Twitter by the Center for Molecular Immunology (CIM) of Havana, the institution in charge of its development in collaboration with Biocon company, from India.

The monoclonal antibody Itolizumab developed by our company in collaboration with the Indian company #Biocon, receives authorization to start a phase III clinical trial in patients with # COVID19 in the USA, Mexico and Brazil. pic.twitter.com/G36GDESkbw

In another tweet, the CIM noted that this new test will consolidate the scientific evidence that supports the effective inclusion of this monoclonal antibody in the Cuban protocol for the treatment of the disease caused by the SARS-CoV-2 coronavirus.

Winner of a National Award from the Cuban Academy of Sciences in 2014, Itolizumab has an anti-inflammatory and immunoregulatory effect. For this reason, it began to be tested in patients with COVID-19, after which it was officially approved by the Cuban regulatory authority for emergency use against this disease.

With its use, “the pattern of cytokine storms produced by the disease caused by the new coronavirus decreases considerably and patients improve their ventilatory capacity,” said the Center for State Control of Medicines, Medical Equipment, and Devices (Cecmed).

Recently, Cuban researchers shared an article published in the journal Gerontology about the experience in Cuba of the use of Itolizumab in elderly patients with COVID-19.

The study “combined the timely use of this monoclonal antibody with other antiviral and anticoagulant therapies to reduce the worsening of the disease and mortality,” says Prensa Latina (PL) agency.

The study qualifies Itolizumab as an “innovative product of Cuban biotechnology” and assures that its use made it possible to reduce the number of patients with evolution to critical stages.

Among the patients treated with the Cuban drug are elderly with multiple comorbidities, “susceptible to adverse clinical results in the course of infection by the SARS-CoV-2 virus,” says PL, citing the article.

According to the article, the extended access clinical trial to receive Itolizumab included older adults belonging to a nursing home in the city of Santa Clara, where a local transmission event was registered. And although all the patients had underlying medical conditions, the results showed that the drug “was well tolerated.”

“After the first dose, the evolution of the disease was favorable and 18 of the 19 patients studied were discharged and were clinically recovered,” says the source.

Created by the CIM in 1995, Itolizumab was initially used to treat certain types of cancer and autoimmune diseases, but with the arrival of the pandemic, its possible effect in the treatment of COVID-19 began to be investigated, with effective results.

Dr. Tania Crombet, clinical director of the CIM, has said that the results of this drug are “very significant in reducing the mortality rate.” In serious patients, she said, the recovery rate was higher than 80% and in the case of moderate or nursing patients with a great propensity to worsen their clinical picture, more than 95% recovered successfully, according to data up to last July.

In addition to the achievements in Cuba, its registry is also based on a controlled trial carried out in India, which confirmed the data reported on the island. The trial showed that the use of the Cuban monoclonal antibody contributed to reducing mortality in that Asian country, prompting the Indian regulatory authority to also authorize its use in the treatment of COVID-19.