In Hialeah, supporting “our president” is an emotion-filled liturgy that acquires overtones of religion where reasonableness is not paramount. 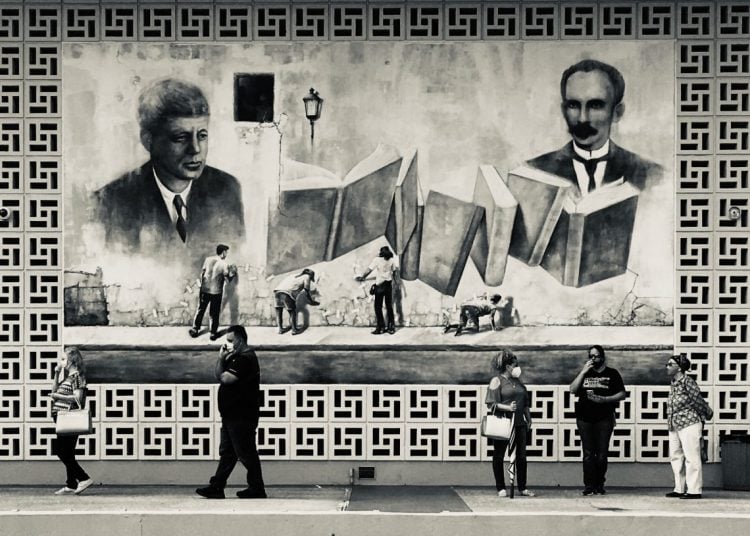 A line of voters waits to vote at the John F. Kennedy Library in Hialeah, Florida. Photo: Rui Ferreira.

In the parking lot of the John F. Kennedy Library, where a voting center has been installed for the 2020 elections, all existing rules are violated in an electoral process.

Electoral propaganda is biased, only in favor of President Donald Trump. It is located less than half the authorized distance, which is 150 feet. Political sergeants proselytize close to the voting line. Voters appear with caps, t-shirts or masks in favor of the president. Anyone who favors Democratic candidate Joe Biden is rejected immediately and with disdain.

“The Democrats are traitors,” explains Héctor, a Nicaraguan evangelical who proudly displays a Trump propaganda mask and begins a short conversation with reporters trying to explain his reasoning. When asked why they are traitors, he answers: “They are traitors to God.” How? “I don’t know,” interrupts a lady who stands next to him carrying a “Trump 2000” banner.

Héctor tries to resolve the matter with a long paragraph. “The president is the one who is going to liberate us Cubans, Venezuelans, Nicaraguans. He is our president.” And the matter goes no further. When the conversation returns to the issue of the Democrats and the fact that there are not many in sight, Héctor also has an answer: “Yes, they are here, they are infiltrated in the voting line.”

Cuban Julio Martínez, former mayor of Hialeah a long, long time ago, agrees with the Nicaraguan. He calls the journalist aside and inquires before giving explanations. “You understand Spanish, right?” I answer affirmatively. “Well, the problem is that we support Trump because we have suffered from communism in Cuba and our president has said that he is going to rid us of that curse,” he says.

But the discourse continues along that line. When I ask Martínez how Americans’ quality of life has improved under Donald Trump, the answer is surprising. “That is not important now. What’s important is that he has promised to rid us of communism.” When I remind him that the restrictions have impaired contact between Cuban families, we enter the other avatar of anti-Castroism in Miami. “He’s stopped monetary support for the Castros.” One is dead, he is reminded. “Hey, it’s impossible to talk to you. It’s always like that with foreigners, they don’t understand a thing about Cuba.” And he turns his back on me.

Héctor and Julio are not alone. They are surrounded by friends, but they don’t want to talk. They lower their heads or turn away so as not to appear in the photos.

Hialeah poll workers and police don’t seem interested in correcting the violation of regulations. The most important thing in this constituency is that the people vote. And they do it even in the rain because, at least in Hialeah, support for Trump is an almost religious devotion.