Alexander Acosta decided to resign after being heavily criticized for the way he handled in 2008 a secret agreement with wealthy financier Jeffrey Epstein, accused of sexually abusing dozens of girls and minors. 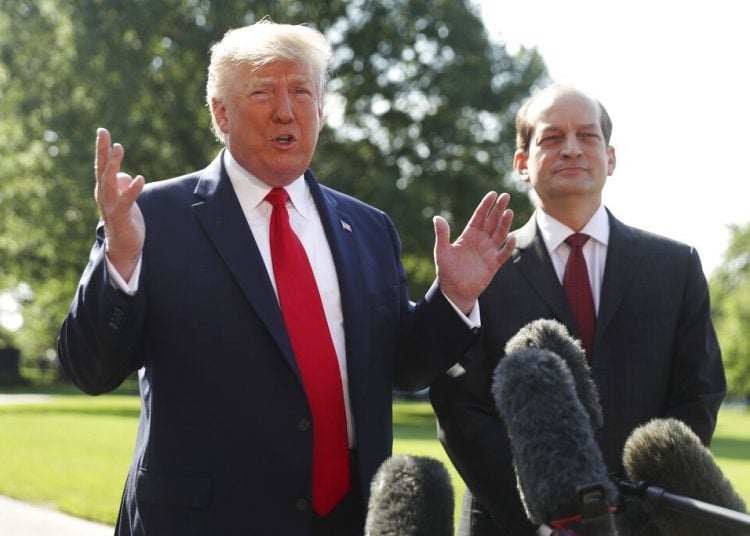 President Donald Trump speaking to the press along with Secretary of Labor Alex Acosta at the White House on Friday, July 12, 2019 in Washington. Photo: Andrew Harnik / AP.

Acosta decided to resign after being heavily criticized for the way in which he handled in 2008 a secret agreement with wealthy financier Jeffrey Epstein, accused of having sexually abused dozens of girls and minors.

Trump announced the news on Friday with Acosta at his side at the White House, shortly before the U.S. president left for Wisconsin and Ohio. He said that the official had been a “great” labor secretary and added that he had not asked for his resignation.

Alex Acosta said that his resignation would be effective within seven days and that it did not seem right to him that his handling of the Epstein case should distract him from his duties as head of the labor portfolio.

“What I mean is that we have a fantastic economy and that it is about focusing on the creation of jobs,” he said.

Acosta, born in Miami in a family of Cuban origin, was the federal prosecutor of that city when he supervised a non-trial agreement with Epstein in 2008. Epstein avoided federal charges and spent 13 months in jail.

For this reason, Democratic legislators and presidential candidates had demanded Acosta’s resignation and a federal judge said the agreement violated federal law because the victims were not notified. The Department of Justice is investigating that aspect.

After initially defending Acosta, Trump said he would study “very carefully” the 2008 agreement.

The investigation of that agreement began months ago after a report in the Miami Herald.

Epstein, 66, reached a secret agreement to end a federal investigation into the sexual abuse of at least 40 minors that could have sent him to prison for life. He pleaded guilty to state charges, compensated the victims and was registered as a sex offender.

Acosta had tried to clear his name and encouraged by Trump held a press conference to defend his actions. He maintained with legal arguments that his office had reached the best possible agreement at the time, taking into account the welfare of the victims.

“We did what we did because we wanted to see Epstein in jail,” he said. “We believe we proceeded appropriately.”

At the insistence of the press, Acosta reiterated that the circumstances had changed.

When federal prosecutors in New York announced this week that they were bringing new charges against Epstein, Acosta tweeted that he was “pleased” by the decision.

“The serious crimes committed by Epstein are horrendous,” Acosta tweeted. “With the evidence available more than a decade ago, federal prosecutors insisted that Epstein go to jail, register as a sex offender and warn the world that he was a sexual predator.”

“Now that new evidence and additional testimonies are available, the NYPD has an important opportunity to do justice more fully.”

Acosta took office in early 2017 at the head of the Department of Labor, a department that oversees the enforcement of more than 180 federal laws covering some 10 million employers and 125 million workers.

He had enraged some conservatives who demanded his departure long before the Epstein scandal. They objected to his decisions to rule out labor lawsuits for discrimination and to keep in their posts officials who came from the presidency of Barack Obama.

Acosta is a former federal prosecutor and head of civil rights, a graduate of the prestigious Harvard law school. Before entering government, he was dean of the Faculty of Law of the International University of Florida.