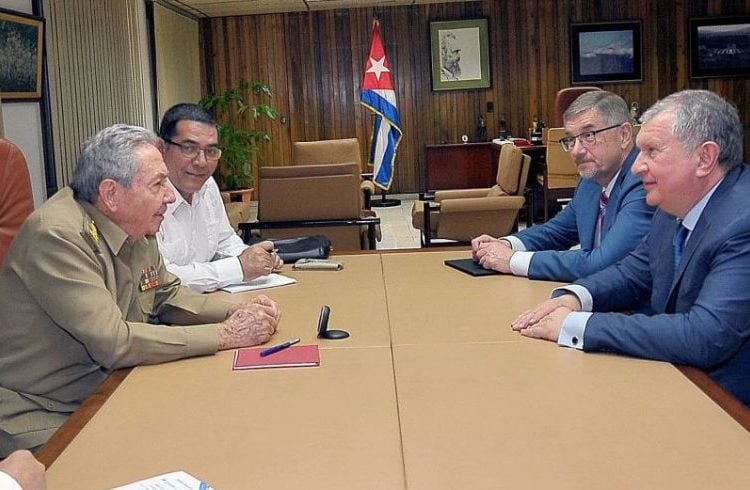 Raúl Castro met on Saturday night in Havana with the president of the Russian Rosneft Oil Company, Igor Sechin, reported the island’s official media.
Cuban Vice President and Minister of Economy and Planning Ricardo Cabrisas also participated in the meeting between Castro and Sechin, held at the headquarters of the Central Committee of the ruling Communist Party of Cuba (PCC, the only legal party).
Sechin and Cabrisas had previously held a working meeting in which they dealt with issues related to bilateral economic and cooperation relations.
Rosneft, Russia’s major oil company, last May started sending to Cuba 250,000 tons of oil and diesel (some two million barrels) in accordance with a contract with the island’s Cubametales enterprise.
The agreement was signed last March and some experts assessed the amount of the transaction at some 100 million dollars.
The shipments of Russian oil and its derivatives to Cuba resumed after President Raúl Castro in late 2016 requested from Russian President Vladimir Putin the guarantee for the supply to the island, given the reduction in the shipments from Venezuela due to the economic crisis in the South American country.
However, Venezuela is still Cuba’s principal oil supplier through an energy agreement at preferential prices for which the island got to receive more than 100,000 daily barrels of oil in exchange for supplying the South American country with professional services, mainly from physicians and teachers.
In recent years Cuba and Russia have given a boost to their bilateral relations in order to reestablish the close cooperation they had before the disappearance of the Soviet Union (USSR) in 1991 with the signing of new economic cooperation agreements in areas like transportation and the metallurgic and heavy industry.
EFE / OnCuba