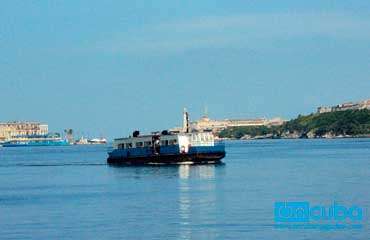 Behind remain the turmoil and the noise of Habana Vieja. After only five minutes of sea travel in the famous “small motor boat” we land in Regla, a peaceful town that resembles a provincial city.

Only a couple of days in the year make Regla a place full of visitors and agitation. These days are September 7 and 8. The 7th, because of Yemayá, the most maternal of goddesses among the orishas and owner of salt waters. The 8th, because it is the day of all the virgins named Mary, and the community of Regla has its particular holy mother, who is also the protector of seamen.

The virgin of Regla has dark skin and carries a pink-cheeked baby in her arms. According to the legend, her image crossed the ocean and challenged great storms until landing in the island. Like Yemayá, her clothes are predominantly blue.

For those reasons, the people’s feelings merged into one single person the Catholic Virgin of Regla and the Yemayá of the Yorubá religion. This religious syncretism produces a miraculous communion among all the persons who hear mass in the church of Our Lady of Regla.

The majority of the faithful arrive dressed in different shades of blue: sky blue, marine blue, indigo blue… Some approach the small malecon facing the sanctuary and from the shore throw white flowers into the sea.

According to the belief, Yemayá loves white roses, and those of her children whose health is precarious must make her that offering.

The Virgin of Regla-Yemayá has many worshippers who come to the sacred place from all parts of Cuba, and even from abroad, to present their vows and prayers to the saint. She helps to achieve sea voyages and with her motherly instinct saves her children from misfortune.

Since 1956, during the time of Pope Pius XII, the image of Our Lady of Regla received the canonization crown. On February 24, 1987, Monsignor Jaime Ortega, Archbishop of Havana, consecrated the altar and the temple located on this side of the bay.

Here, already in 1687, a sanctuary consecrated to the Virgin of Regla was erected, around which grew the settlement that in time developed into what today is acknowledged as one of the capital’s municipalities.

While on the other side of the Atlantic, in the village of Chipiona, province of Cádiz, there is another Virgin Mary, black and belonging to the sea. She is worshipped under the same name, and her followers visit another Sanctuary of Our Lady of Regla.

On Barbers, Traditions and Economic Reforms

On Barbers, Traditions and Economic Reforms