The new infections totaled 906 on Sunday, while two deaths were reported. Discharges reached 993 patients while 48 remained in intensive care 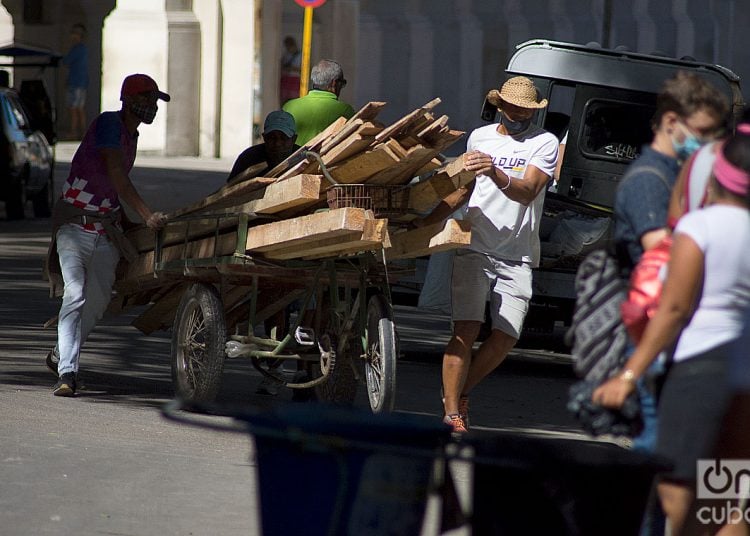 Men transporting wood during the outbreak of COVID-19 in Havana, in January 2021. Photo: Otmaro Rodríguez.

Yesterday the SARS-CoV-2 virus left 906 new infections in Cuba, less than on Saturday, but closed the month with the highest total figures: 15,536 patients and 70 deaths, according to information issued by the Ministry of Public Health (MINSAP).

On the last day two new deaths were reported, with which the death toll now stands at 216. This time it is two Habaneros, 68 and 72 years old, with diseases that complicated their evolution, according to the report.

Havana continues to be the province with the greatest complexity, ratified with its 442 new positive cases yesterday.

“Dispersion is important,” said Dr. Francisco Durán, who added that although the disease is present throughout the island, the risk is still very high in certain places, such as the capital.

In fact, nine Havana municipalities, together with one from Guantánamo, another from Pinar del Río and Santiago de Cuba, have contributed the largest number of cases in the last fifteen days. Santiago de Cuba itself identified 144 infections on Sunday, the majority in the main municipality.

For their part, the Guantánamo specialists reported 64 cases, followed by the provinces with the highest numbers: Pinar del Río (56) and Villa Clara (52); although, except for Cienfuegos, all provinces registered infections.

The autochthonous transmission predominates again (890) over imported cases (16) and the majority continue to be contacts of confirmed cases, which were 859 of yesterday’s cases.

Until midnight on Sunday, 13,017 patients were still hospitalized; 5,469 are confirmed active cases, 19.8% of the 27,592 identified with the new coronavirus since last March 11, when the first cases were reported on the island.

The reported discharges this Sunday exceeded the number of patients, with a total of 993, in what Dr. Durán highlights as a positive balance.

48 people remained in intensive care, 27 in critical condition and 21 in serious condition; including a 104-year-old man.

Yesterday 18,403 samples were processed throughout the country, although Havana concentrates a good part of them, the MINSAP reported.