The restrictions will come into effect next February 6 and will apply to flights from the United States, Mexico, Colombia, the Dominican Republic, Panama and Jamaica, nations from which, according to Cuban authorities, the largest number of travelers arrive in the country. 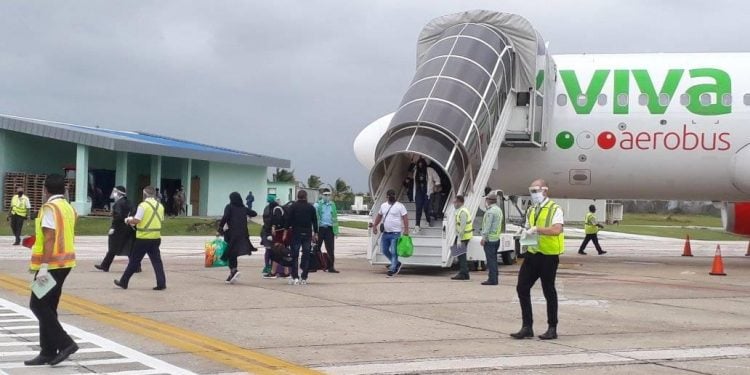 The Cuban government announced this Saturday new restrictions on commercial flights due to the complex epidemiological situation the island is facing due to the current outbreak of COVID-19. In addition, it announced that international travelers will once again be isolated, a measure it already had applied in previous moments of the pandemic.

The restrictions will come into effect next February 6 and will apply to flights from the United States, Mexico, Colombia, the Dominican Republic, Panama and Jamaica, nations from which, according to Cuban authorities, the largest number of travelers arrive in the country.

Previously, cuts had already been made to air operations from some of these countries, but given the sustained increase in cases—for which the authorities blame mainly the non-compliance with the protocols established for international travelers—Mercedes Vázquez, director of air transportation and international relations of the Institute of Civil Aeronautics of Cuba (IACC), explained that it was essential to take new measures and reduce more flight frequencies.

During the daily press conference on the island’s health situation, the official explained that the U.S. companies Jetblue and American Airlines, the Mexican Viva Aerobus and the charter flights managed by the Cuban state agency Havanatour will maintain a weekly frequency. Meanwhile, Copa Airlines will have two arrivals a week and Aerorepublica and Intercaribbean one every 15 days.

Likewise, she specified that the restart of flights from Nicaragua, Guyana, Suriname, and Trinidad and Tobago remains suspended, and the frequencies from Haiti are suspended.

Vázquez affirmed that these measures are “temporary” and that “there is a will to maintain the level of operations that allows communication, even when other countries have taken more drastic steps to close borders and operations,” as quoted by the Agencia Cubana de Noticias (ACN) news agency.

Regarding airports, the IACC official specified that in the case of Havana, flights will only arrive through terminal number 3 of José Martí International Airport, “so they may undergo modifications in their arrival schedules and dates.”

She also said that the airlines “must ensure that all passengers travel with their luggage, as cargo flights for lagging luggage will not be operating” and insisted that people will not be allowed at the airport to receive or send off passengers, and that “only the transport driver to transfer travelers who return to their countries will be authorized,” the source specified.

Also this Saturday during the daily conference of the Ministry of Public Health (MINSAP), its national director of Epidemiology, Dr. Francisco Durán, referred to the isolation measures for international travelers that will start being applied on February 6 with the aim of reducing the spread of COVID-19 on the island.

Durán recalled that isolation in institutions had already been applied previously in the country after the start of the pandemic. “From the airport they went to an isolation center, where they remained until the result of the second PCR was obtained, which is taken on the fifth day of the stay on the island,” explained the expert, quoted by the official Cubadebate website.

Now, the isolation will be implemented for five days, until the result of the PCR carried out upon arrival in Cuba is ready, the ACN clarified, although the protocols will vary according to the nature of the travelers.

Thus, “in the case of foreign tourists, businesspeople, technicians and cooperators, as well as foreign diplomatic personnel accredited in Cuba, accredited foreign press and approved official delegations in the period, the protocols approved by the Ministries of Public Health, Foreign Trade and Investment and the Ministry of Foreign Relations will be applied,” commented the specialist.

As for the health collaborators and of the rest of the Central State Administration agencies, these “will be isolated in the facilities created in Havana and Matanzas, fulfilling the established requirements,” while “foreign students and scholarship holders will be located in entities designated for this purpose by the MINSAP or the Ministry of Higher Education.”

Cubans residing in the country will be located “in authorized centers in the provinces and it will be free of cost, as well as transportation to the center and return to their residence once the isolation period is completed.” And foreigners and Cubans not residing on the island “will be isolated in designated hotel facilities in each territory,” and will have to bear the costs of stay and transportation.

Cuba is experiencing its worst outbreak of COVID-19, with a sustained increase in patients since the opening of international airports at the end of last year. In this scenario, January has become by far the worst month of the pandemic on the island, with negative marks that at the end of this Friday reached 910 new cases in one day, 5,100 active cases and more than 25,000 infected and 213 deaths from the disease since last March.