In intensive care the figure barely fell to 57, 30 of them in critical condition and 27 in serious condition; within which a seven-month-old infant stands out. 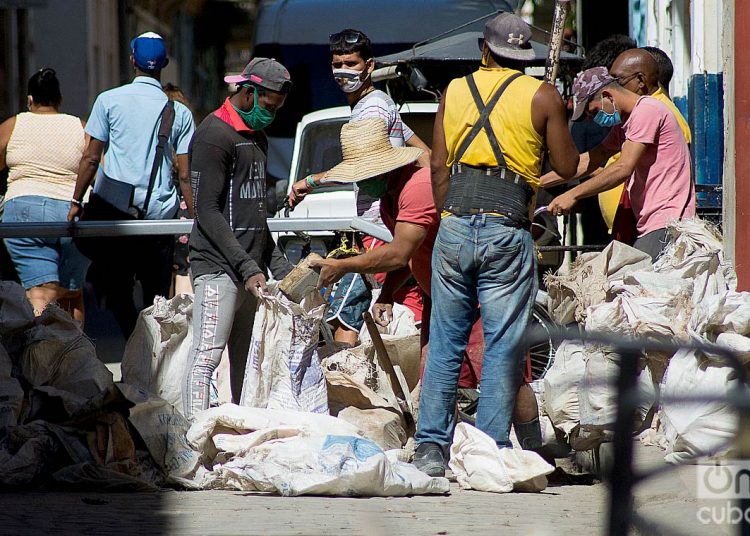 Men working during the outbreak of COVID-19 in Havana, in January 2021. Photo: Otmaro Rodríguez.

Five deaths due to COVID-19 focus the news related to the pandemic in Cuba, according to the most recent report issued by the Ministry of Public Health (MINSAP).

After the 18,095 samples processed, the MINSAP reported that new infections descended slightly to 816; 760 of which were detected in contacts of confirmed cases.

A total of 793 people were infected with the virus by autochthonous transmission and in 23 the disease was acquired abroad; most of these in Spain and the United States.

With nine municipalities (Centro Habana, Old Havana, Regla, Plaza, Cerro, Diez de Octubre, Cotorro, Boyero and Marianao) among the 12 with the highest incidence rate in the last 15 days, the capital continues to show a worrying situation.

By incidence rate, it is the province with the second most complicated situation, with 233 per 100,000 inhabitants, only surpassed by Guantánamo (261.65). It is followed by Santiago de Cuba and the special municipality of Isla de la Juventud, whose incidence has increased with the rise in infections in recent days.

As of midnight Wednesday, February 3, 13,502 people were admitted to hospitals or centers prepared for the treatment of COVID-19. Active cases numbered 5,650.

In intensive care the figure barely fell to 57: 30 of them in critical condition and 27 in serious condition; within which a seven-month-old infant stands out.

At this point, Dr. Francisco Durán alerted the population, because 144 of the total of new infections today correspond to children under 20 years of age. 106 of them hadn’t even come of age.

Only in January, according to the specialist, 1,626 minors were reported with the SARS-CoV-2 virus, a figure higher than throughout 2020, when the new coronavirus affected 1,308 children and adolescents.

On this day there were 774 discharges, with which the recovered patients now total 24,468.