This March 11 marks two years since the first cases of coronavirus on the island, precisely the same day that the WHO declared the pandemic. 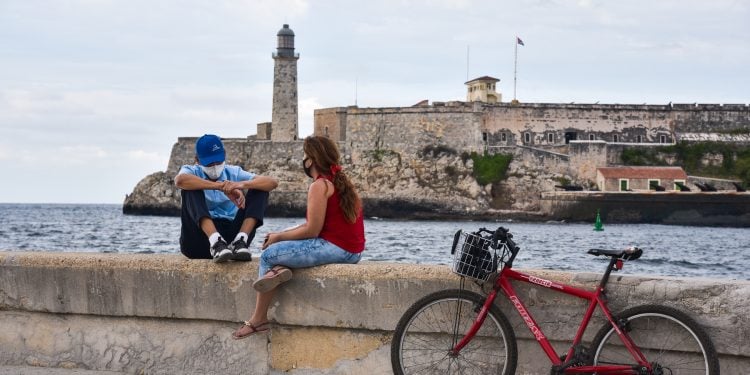 Two years have gone by since the World Health Organization (WHO) officially declared the COVID-19 pandemic on March 11, 2020. That same day, the Cuban authorities reported the first cases on the island: three Italian tourists staying in the city of Trinidad, in the central province of Sancti Spíritus. By then, cases of the still new coronavirus had been registered on all continents, after its appearance in China at the end of the previous year, and it was a matter of time before the infectious disease made its way into the Caribbean country.

Just one day later, the first Cuban infected with SARS-CoV-2 was reported, a young man from Santa Clara infected by his wife, a Bolivian who arrived from the Lombardy region, in Italy, and six days later, on March 18, one of the Italian travelers confirmed a week earlier died. This thus became the first COVID-19 fatality in Cuba, which in these two years has registered more than one million cases and more than 8,500 deaths from the disease, according to official statistics, in which the autochthonous cases have been the vast majority.

In all this time, however, there have been ups and downs, closures and de-escalation, scientific advances and changes in health protocols, and many other events have also taken place in Cuba that, more or less related to the pandemic, have tensed the country’s situation even more and have made the last 24 months a particularly difficult period for the largest of the Caribbean islands. On this broad and complex panorama, we highlight some aspects as a summary of a stage that is leaving a sad and deep mark on the entire planet and that seems still far from over.

From emergency to habit

As expected, the pandemic set off an alarm throughout the world. The explosive outbreak of the coronavirus put practically all countries in a state of emergency and forced them to take drastic measures in order to stop its rapid spread. In a matter of weeks, while the numbers of infected and deceased grew exponentially, the planet ceased to be what it had been, social life came to a standstill, the economy began to suffer a severe blow from which it has not yet recovered, and the anguish and fear, sadness and pain became predominant feelings everywhere.

Cuba was no exception, and the unease and fear of what was happening took over the streets and homes, while the masks became part of the island’s landscape. However, as the situation evolved, that partial improvements were registered ― although they were followed by setbacks ―, that closures were relaxed and people were getting used to living with the disease, the emergency would give way to a “new normal,” to a naturalization of what was until recently exceptional and, even, to a dangerous indolence that more than once has ended up taking its toll. This is how we have reached today, when life is more like what it was, without knowing for sure if it ever will be again.

It is the part most cited in press reports and official reports and also one of the most questioned outside of them. According to statistics reported daily by the Ministry of Public Health (MINSAP), more than 1.07 million people infected with SARS-CoV-2 have been detected on the island in these two years, of whom more than 8,500 have died. and more than 1.06 million have recovered, about 99% of the total. The greatest weight of these data falls on the past 2021, until now the most disastrous year of the pandemic on the island, when more than 954,000 positive cases were registered and more than 8,100 deaths that left the previous period well behind.

However, even though these numbers are not exactly a source of pride ― although those of 2020 stood out at the time within the global context ―, there has been criticism and controversy about their veracity. In particular, the information offered in the most critical period of last year has been questioned, at a time when a prolonged pandemic peak strained the health system to the maximum and multiplied the sick and fatalities, which, however, according to unofficial assessments and even in the state press, could be many more. True or not, and as can be said of the rest of the world, it still seems impossible to get to know the exact figures, because there are always people who stay off the radar, either because they do not go to the doctor or because, even if they do, they never underwent a diagnostic test. 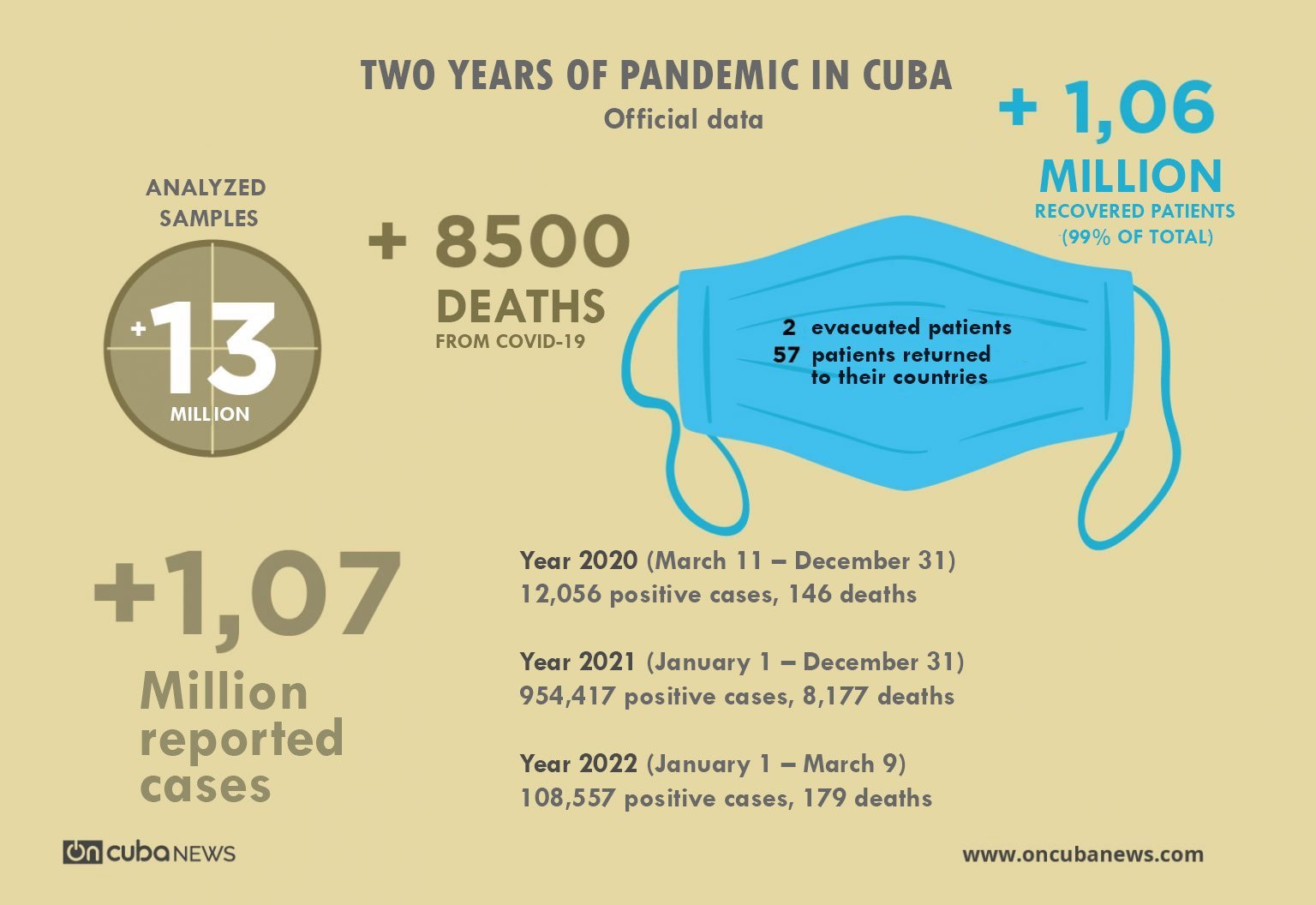 That of COVID-19 has been a single pandemic, but distributed at different times of peaks and lows, of plateaus and waves. These waves have not occurred simultaneously throughout the world, as is well known, nor have they been equal to each other. Each has been driven by different variants of the coronavirus, by mutations that have made SARS-CoV more contagious and, in some cases, more lethal as well. The planet has suffered them with more or less strength, in some countries and continents more than in others, and, paradoxical as it may seem, they have even happened while in some places reopenings were being promoted or in the midst of a vaccination campaign against the disease.

In Cuba the scenario has not been different and at least four waves can be identified. The first two, during 2020, never reached alarming figures, seen from the current perspective. The third, however ― which for some was more than one, was two, although without relegation between them ― put the country against the wall and marked a succession of negative records, hand in hand with the most infectious Beta and Delta strains. The latter was responsible for the brutal pandemic peak between July and September 2021, which saturated hospitals and left many Cuban families in mourning. Finally, the wave of Omicron would arrive, still today in a kind of plateau and that, unlike what happened in the rest of the world, has not marked records on the island.

A showcase for Cuban medicine and science

Among the few positive balances that the coronavirus has left is the relevant performance of Cuban medicine and science. Even in the midst of the economic crisis, spurred on by the pandemic itself, internal deficiencies and the U.S. embargo, the island’s health workers and scientists have deservedly captured the spotlight for their work in confronting COVID-19, despite the difficulties and shortcomings that make their work more difficult. Health professionals, moreover, have not only deserved the applause of millions for their consecration in Cuba, but have also saved lives in dozens of countries, including European nations such as Italy and Andorra.

Scientists, for their part, have emerged from the anonymity of laboratories and classrooms to become regular faces in the media. Three vaccines already authorized on the island and in other countries, with which almost the entire Cuban population has been immunized ― although their validation by the WHO is still pending ―, two other vaccine candidates under study, different drugs produced in Cuba used against COVID-19, and even pulmonary ventilators and diagnostic tests are part of the successful scientific catalog resulting from these two years of pandemic. To this should also be added the contribution of epidemiologists, mathematicians and computer scientists for the evaluation of the different scenarios and the elaboration of forecast models, necessary to define the steps for the future. 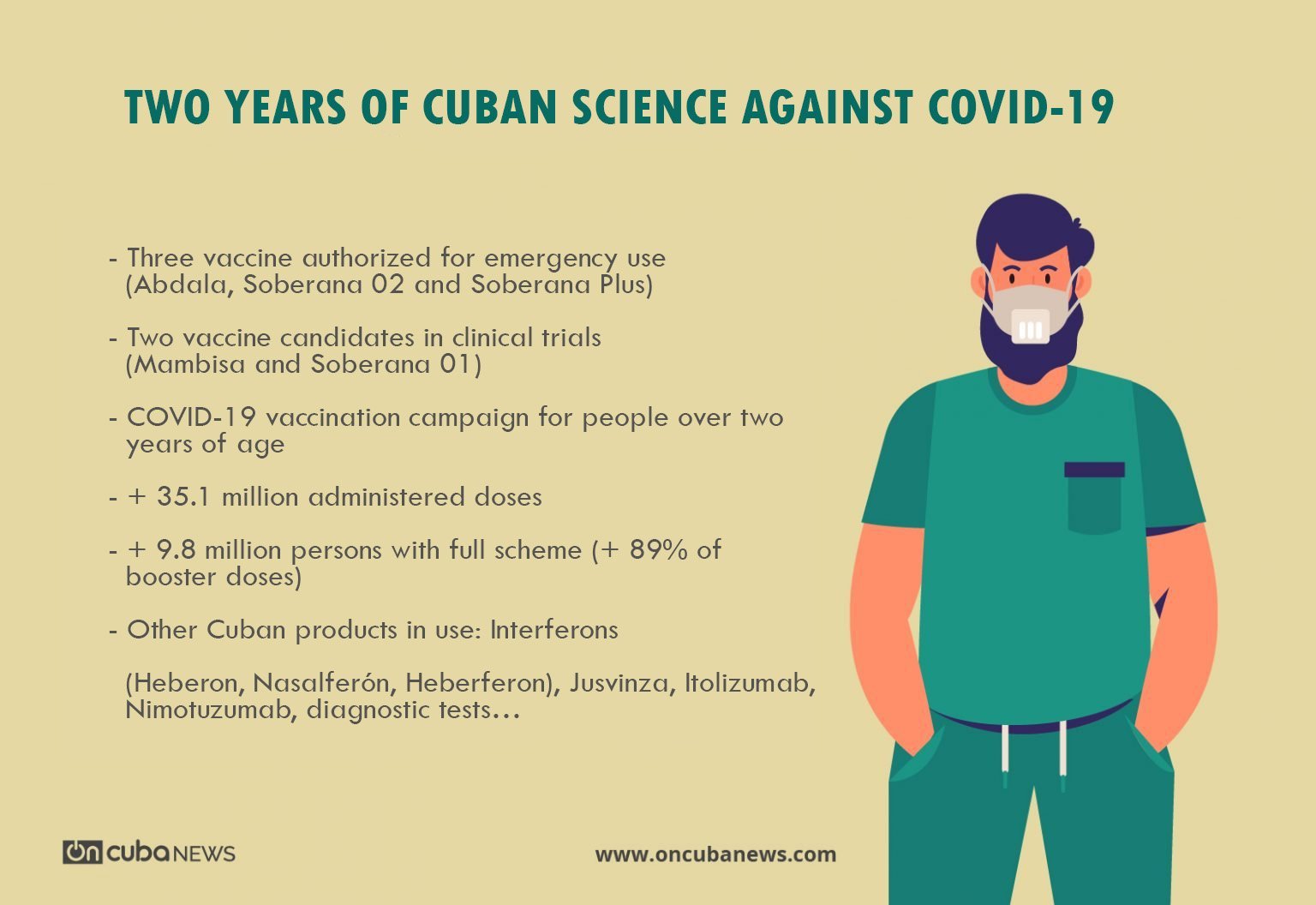 These last 24 months have been marked throughout the world by COVID-19 and its profound economic and social impact. It is impossible to evaluate what has happened in these two years without taking into account how much the pandemic has meant, how much it has affected people’s daily lives and also national and international dynamics. But it is clear that, even if it has monopolized both news broadcasts and government plans, as well as domestic concerns and conversations, much more has happened in the world, from wars and social protests to elections and coups, and also major sports events. Like the Tokyo Olympics.

For Cuba, the two years since March 2020 have been, without a doubt, the most complex of the 21st century. The worsening of the economic crisis, the increase in U.S. sanctions, the problematic implementation of the monetary reorganization and other economic reforms, the power outages, the multitudinous queues, the systematic shortage of basic products, the unstoppable increase in inflation, the growing social activism, the anti-government protests and the legal processes resulting from them have been, among other aspects, as a backdrop to COVID-19 and it seems that they will continue to be. In this scenario, also marked by the extensive vaccination coverage on the island and the foreseeable effects of the war in Ukraine, the third year of the pandemic is already beginning to run.