According to a Prensa Latina (PL) report, the strategy in these ages, a group that represents three percent of the Cuban pediatric population, is centered on three groups: from zero to six months, from six to 11 months, and between 12 and 24 months. 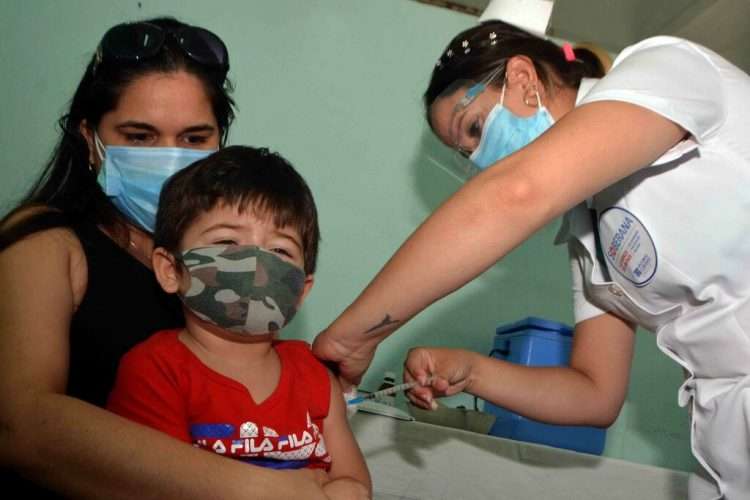 Cuba announced this Monday new clinical trials, this time aimed at children under two years of age, an age group that has not received the immunogen against the SARS-CoV-2 virus, as reported by official media on the island.

According to a Prensa Latina (PL) report, the strategy in these ages, a group that represents three percent of the Cuban pediatric population, is centered on three groups: from zero to six months, from six to 11 months, and between 12 and 24 months.

Called Soberana Chiquitines, the new clinical trial will be carried out in children between one and two years of age with the Soberana 02 and Soberana Plus vaccines, both from the Finlay Vaccine Institute (IFV). This will be implemented in Cienfuegos province, according to the source.

The Center for Genetic Engineering and Biotechnology (CIGB), for its part, is working on an immunization strategy against COVID-19 in children under two years of age with the Abdala vaccine in Camagüey province, as explained this Monday by its director of clinical research, Verena Mucio during the Mesa Redonda television program, quoted by PL.

With this immunizer, a plan is drawn up for the first thousand days of life of infants, that is, from their conception until they are 24 months old.

“Children under six months must be protected through maternal vaccination and breastfeeding, since they are born with antibody levels similar to those of their already immunized mother, in this case with the Abdala vaccine, from the Center for Genetic Engineering and Biotechnology (CIGB),” the source emphasized.

At the same time, PL pointed out, the health authorities are working on the design of an investigation in infants between six and 11 months of age to evaluate the safety, immunogenicity and the effect of the vaccine in this population.

The strategy also includes pregnant women, who vaccinate their babies by passive transfer of immunity, and newborns are tested. This study is called Espirta and will be carried out in four Havana hospitals, while the second investigation in children from six to 11 months will take place in eight locations in the capital.

With 1.8 million children between the ages of two and 11 already vaccinated, the news agency recalled, the results of the application of the vaccines in this population show their safety, reasons that gave way to the island’s health authorities to begin the immunization in these pediatric ages.