Through its Twitter account, the Cuban Ministry of Public Health (MINSAP) reported that 255,896 health workers and 186,499 residents of the Havana municipalities involved in the campaign have already received their shot at least once. 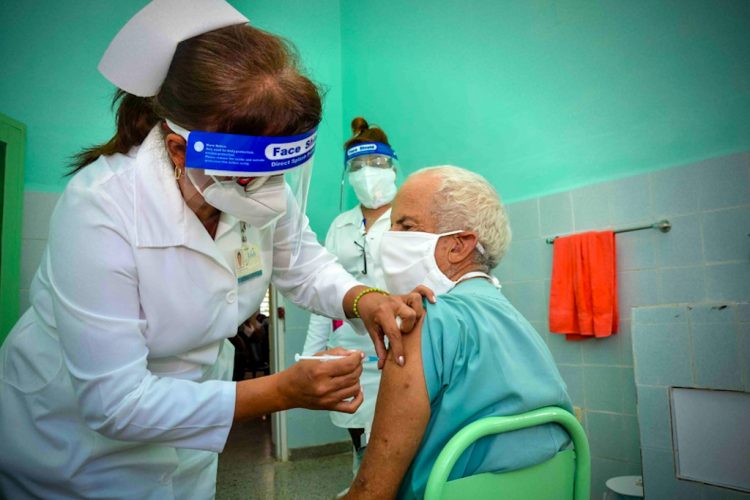 So far 442,395 people have received the first dose of the Cuban Abdala vaccine candidate as part of a health intervention that plans to administer the drug against COVID-19 to health workers, risk groups and territories selected by levels of contagion.

Through its Twitter account, the Cuban Ministry of Public Health (MINSAP) reported that 255,896 health workers and 186,499 residents of the Havana municipalities involved in the campaign have already received their shot at least once, Cubadebate reported.

The health intervention in the Cuban capital began in the municipalities of Regla, Habana del Este, Guanabacoa and San Miguel del Padrón, and in the following weeks Arroyo Naranjo, Boyeros and Cotorro will be incorporated, in which about 383,000 residents are expected to be vaccinated with Abdala.

Meanwhile, Dr. Mayra García, coordinator of the clinical trials of the other more advanced Cuban vaccine candidate, Soberana 02, announced that from June 7 to 11, the first dose of this drug will be applied to the volunteers who received a placebo in Phase III of the clinical trial carried out in Havana, reported the Agencia Cubana de Noticias news agency.

During the press conference on the epidemiological situation caused by COVID-19 in Cuba, the specialist explained that, according to the study design, a group of volunteers received two doses of Soberana 02, and another received a three-dose scheme, two of the candidate itself plus one of Soberana Plus, while the third group was injected with a placebo.

García explained that in nine days the application of the Soberana Plus dose must be completed, which completes the vaccination scheme of Phase III of the clinical trial with the drug, developed by the state-run Finlay Vaccine Institute.

The doctor clarified that vaccination does not prevent contagion with the coronavirus, so she insisted that the more than 40,000 subjects participating in the study must maintain hygienic and distancing measures after finishing the process.

Cuba exceeded 125,000 infections with COVID-19 since the beginning of the epidemic on the island, after reporting 1,057 new coronavirus positive cases this Sunday.

With the day’s fatalities, the death toll from COVID-19 already stands at 814. They were six women and four men between the ages of 38 and 94 and residing in Havana, Holguín and Las Tunas.