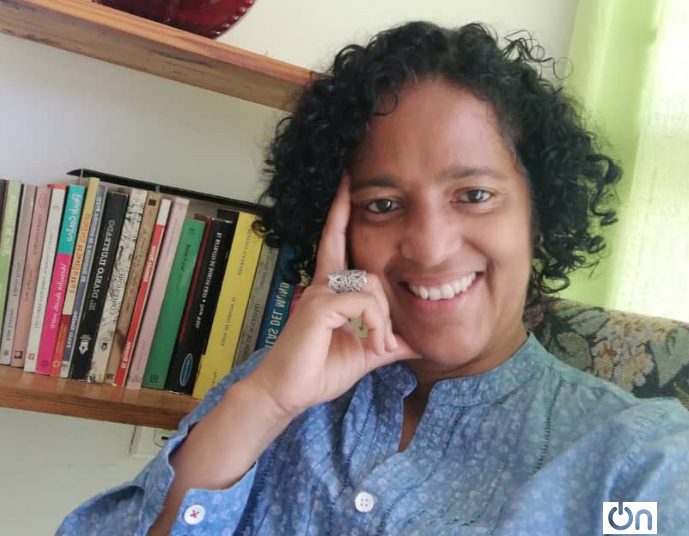 Lidia Romero’s friends call her Yiya. Her kindness, her calm, her energy and her perpetual smile are traits that I don’t forget about her. I met her when we were law students in Havana and afterwards I have only seen her when we have crossed paths in the street and when we have shared work and dreams, because her dreams are also mine. Graduated with a Bachelor of Law from the University of Havana in 1997, Lidia has studied gender and human rights issues at various universities abroad. She is an activist for the human rights of LGBTIQ people and women. In 2017, she coordinated the creation of the “I accept” campaign on Facebook, in favor of same-sex marriage. She, along with other activists, has carried out political advocacy actions such as the Agenda for the Rights of LGBTIQ People (#AcciónLGBTIQba), among others. She is part of the 11M Platform, a plural collective for the defense of the rights of people with non-hetoronormative sexualities. Likewise, she works with several independent organizations on gender and women’s rights issues.

In 1998 or 1999, I don’t remember the exact date, I began to study for a Master’s Degree in Criminology coordinated by the Faculty of Law of the University of Havana. I worked in the Office of the Martí Program as a legal advisor and one of the requirements of the master’s degree was to be linked to a research topic or to a law institution. Thus, I went on to work at the Center for Youth Studies, linked in those years to the Union of Young Communists. My tutor was Dr. Margarita Viera. She was the one who awakened my concern about criminology, my vocation as a researcher and future professor at the faculty. She passed away and with this my dreams vanished. I knocked on several doors, but no one was really in a position to take me on. All the candidates were already tutoring one or more of my colleagues. They encouraged me to do the exercise alone and I did. I couldn’t and, as I say, I became discouraged along the way. I had the possibility to return for the next five school years, but I let myself be defeated and it is one of my hardest lessons. I still haven’t gotten over it. I never thought about practicing as a legal professional again.

Activism came to me many years later. I remember having participated in two or three meetings called by the National Center for Sex Education (CENESEX) to dialogue with lesbian and bisexual women. They were very strong meetings. There was a lot of confusion and the discussions reached a rather violent climate. When Oremis, a group of lesbian and bisexual women, one of the Center’s networks, was finally created, I participated in two literary gatherings or something similar that the group organized, but this did not attract me. Perhaps I did not understand those beginnings. Years later, Juana Mora Cedeño, one of the founders of that group, called me and introduced me to the Manos LGBTI Project of Cuba. It had a strong charge on human rights issues. Basically, through workshops. Her group was very strong and for the first time I met activists from various provinces, including trans women.

I learned more from them than what I had read in theory and human rights conventions. I knew and suffered their fears, violations of their rights by the police, institutions, culture, family, etc., aggravated by all the intersectionalities. Most of the trans women I met were from the provinces. They were rented in precarious places that I visited. Many, infected with HIV and with very low self-esteem…living off sex work and harassed by the police, by day and by night. Very harsh living conditions. I remember leaving those spaces and meeting places and telling Juana that I couldn’t. All that energy accompanied me for days. Juana taught me to channel it with great rigor and work.

How is the daily life of a woman activist for the rights of LGBTIQ people and for women’s rights in Cuba? Do you feel supported, understood, tolerated, empowered, optimistic, or just the opposite?

I am a happy woman and I think that, at times, excessively optimistic. A dreamer. One who is convinced that what she does today may not see the results, but there will be something left for future generations. Every morning I go out full of positive energy. Aware that something can (it very often happens) change everything. The dynamics in my work is to face minute by minute the problems of this Cuba “of magic realism.” Family and friends who are far away weigh a lot, because it is a cord that does not break. Sometimes I neglect my family and friends in Cuba because I put more into my work as an activist, basically in the networks. It is not an extraordinary life, but it is my life and I put as much passion into it as possible.

The work of activism requires dedication, commitment, training in human rights issues and their relationship with subjective norms, and daily information about what is happening in Cuba and the world because we are very interconnected. It is essential to know how government structures work, to establish alliances with activisms that are committed to a more just society. It is important to understand that oppressions, the different manifestations of discrimination, have a common root and from that point of view we must try to establish meeting points. This would make it possible to define audiences to influence, goals and grounded tactics that allow glimpses of results. All of this is fine, but it is not enough.

It is essential to seek dialogue with the institutions in charge of promoting public policies, public good campaigns, etc. I think that both activisms and institutions must be open to dialogue. This is missing in Cuba. Sometimes I feel that our institutions are paternalistic. It is difficult for them to understand that we the people have the right to defend our individual and collective rights; that to exert pressure is to try to make visible violations of these rights in order to make them be respected and produce favorable changes for the citizens. Rights exist to be exercised, but government institutions in Cuba, too often, interpret them as challenges to their governance. At this point we begin to be read as mercenaries, confused, manipulatable people, etc., and we know the political burden of these labels.

What rights do you think we urgently need to guarantee for the LGBTIQ collective and women in Cuba?

The rights of LGBTIQ people and the rights of women go hand in hand. Their interconnection is so strong that the advance or decline of the rights of one group has repercussions on the other. They are marked by a common enemy, with two heads and multiple dimensions: fundamentalisms and patriarchy. It is essential to understand it, to know the history of these struggles against long-standing oppressive structures, very well organized and designed for the control and oppression of our bodies and our sexualities. If we look back, it is found that in many societies the heteronorm served to discipline those expressions outside of heterosexual patterns. That order of things has hardly changed. Intersectionalizing the struggles is also recognizing other systems of oppression such as racism and classism because these accompany people’s identity and undoubtedly alter their experiences with gender. Feminism must accompany the struggle of LGBTIQ people because homophobia and transphobia are manifestations of gender-based violence.

Working together to achieve the incorporation of same-gender marriage into the Family Code, and its approval without a referendum is to move the foundations of hegemonic masculinity and patriarchy. We must carry out advocacy to incorporate the rights to adoption, assisted reproduction, abortion, the classification of feminicide and hate crimes within the substantive norms incorporated in the legislative schedule. It is necessary to continue demanding the incorporation within this schedule of laws against gender-based violence and gender-based identity. They are challenges that unite us.

What country, what institutions, what civic culture, what legal and political guarantees and what dreams, in short, do you wish to come true in the nearest future?

I dream of a country with a solid rule of law, which allows the effective exercise of the fundamental rights recognized in the new Constitution. That these rights are materialized through development laws, which can be invoked before the courts, and in the event of their violation, they should be accompanied by due reparation. This, with comprehensive sex education programs based on human rights for all ages. I would like citizens to be able to disagree without the state trying to silence us with a single speech. I dream of laws on gender-based violence and gender-based identity, with same-sex marriage, etc. This is not the country I want, so there is a lot of work to do. It would be very comforting if all of us could be part of the change.