The Cuban-American professor asks the Democratic candidate “with humility and hope” to be “the architect of the bridges of love” between the Cuban and American people, and implement a group of changes in Washington’s policy towards the island if he gets to the White House. 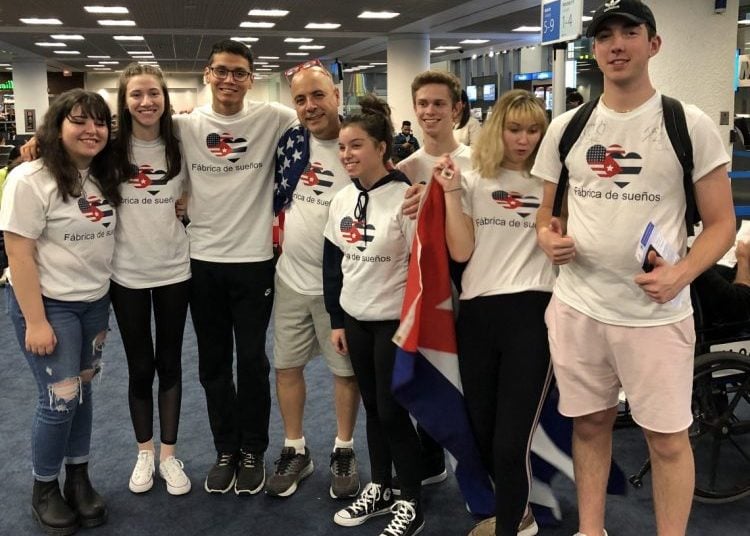 Cuban-American professor Carlos Lazo (4-l) with a group of students during one of his visits to Cuba. Photo: Courtesy of Carlos Lazo.

Professor Carlos Lazo, one of the most active defenders of the rapprochement between Cuba and the United States within the Cuban community in the northern country, launched a petition to Democratic candidate Joe Biden to “repeal the sanctions that weigh on the Cuban people” if he were to win the presidency.

In the petition, published on social networks and on the site of his project for both countries, called “Puentes de Amor” (Bridges of Love), Lazo invites everyone who agrees with it to sign the initiative, and conveys the wish to Biden of “Americans, Cubans, and people of various political and religious creeds from around the world” for Washington to “establish compassionate and humane policies towards Cuba.”

In substantiating his request, the Seattle-based professor, who has traveled to the island several times with his senior high students in recent years, explains to Obama’s former vice president that “at this very moment, innocent people lack food and medicine in that small and impoverished country.”

“Those people, Mr. Biden,” he writes to the Democratic candidate, “are not statistics, but men, women, children and the elderly. They are real human beings. They are our families.”

In addition, Lazo tells Biden that, as a result of the COVID-19 pandemic, he launched a similar petition to President Trump “to ease the sanctions on Cuba,” which was supported by thousands of people, and that he later pedaled from Seattle to Washington DC to take his demand there.

“But,” he says, “Trump did not listen to us. Far from it, he promoted hunger and hardship in the midst of the pandemic and tightened the rope around our brothers’ and sisters’ necks.”

On that occasion, Lazo also wrote a letter to Biden in which, like Trump’s, he asked for “respect and love for Cuba.” In his letter, he referred to the “general cry” for “love to prevail and that this time of confrontation between our countries end,” endorsed by the more than 20,000 signatures received for his first petition.

Now, in this new petition, the teacher asks Biden “with humility and hope” to be “the architect of the bridges of love” between the Cuban and American people, and implement a group of changes in the U.S. policy towards the island if he gets to the White House.

Among the changes requested are the reactivation of the U.S. embassy in Havana “to normalize the issuance of visas and the rest of the consular services,” and the restoration of the Family Reunification Program suspended by the Trump administration since 2017.

He also requests that U.S. airlines be allowed to fly to Cuban provinces as well as unlimited remittances to the Island, and that the freedom of Americans to travel to Cuba be decreed.

“The current travel restrictions restrict the rights of U.S. citizens,” said Lazo to Biden, and in addition he asks him to “allow and encourage financial and commercial relations with the island” and “encourage economic investments and scientific and cultural exchanges between both peoples.”

Finally, the petition reiterates to the Democratic candidate―who is leading the polls on the upcoming presidential elections―that “in times of pandemic, political considerations must give way to human considerations,” a constant call from the Cuban-American professor in his campaigns and initiatives to raise awareness among politicians, businesspeople and American society in general.