Professor Carlos Lazo, who is cycling to Washington with a message of peace, wrote two letters asking for the easing of sanctions against Cuba. 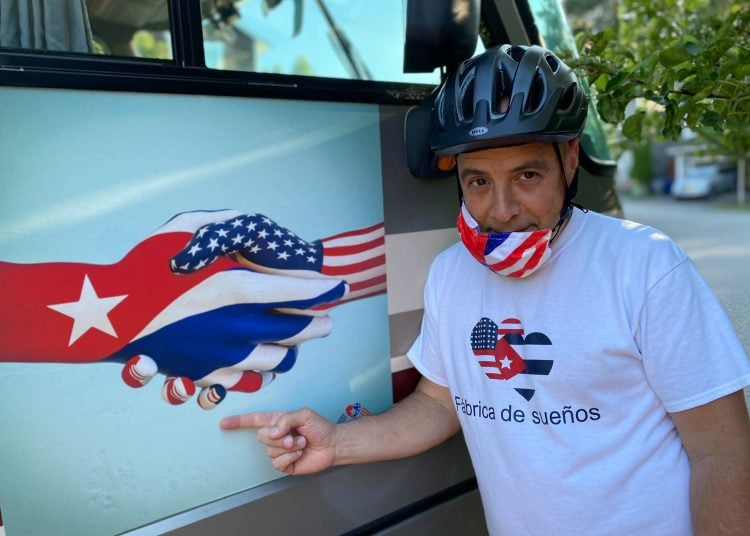 Cuban-American professor Carlos Lazo wrote letters to President Donald Trump and Democratic presidential candidate and former Vice President Joe Biden to bring them a message of peace between Cuba and the United States, backed by thousands of people.

Lazo asks to meet personally with them or “whoever wants to hear us in Washington,” where he is headed with two children and two nephews on a more than 5,000-kilometer bicycle trip from coast to coast in the United States.

His request, regardless of the political origin of his interlocutors, is one: “respect and love for Cuba.”

This isn’t the first time Lazo addresses a letter to Trump. A few weeks ago he wrote to the White House to consider lifting, “even if temporarily, some of the economic sanctions that weigh on the people of Cuba.”

Back then, the request was accompanied by a petition on Change.org that obtained more than 20,000 signatures, but so far they have received no response.

On this occasion, Lazo addresses the current president and his main political opponent, Biden, in the middle of the bicycle trip from his home in Seattle to Washington DC, “to build Bridges of Love” and bring the signatures of thousands of Americans, Cuban-Americans and Cubans who support the easing of sanctions on the island.

“It is a time of love and understanding,” he concluded in one of his letters.

OnCuba reproduces both letters below:

My name is Carlos Lazo. I am a Cuban-American, a teacher. I reside in the State of Washington. Dear President, I have previously written to you by email and by regular mail, but have never received a response from you or your office. Months ago, on the occasion of the coronavirus pandemic that is afflicting the world, I sent you a letter asking you to consider lifting, albeit temporarily, some of the economic sanctions that weigh on the people of Cuba. That request was accompanied by a petition on Change.org that gathered thousands of signatures (mostly from Cuban-Americans). People of different ideologies and creeds expressed their wish that economic sanctions against Cuba be eased.

Although our signature campaign had wide national and international repercussions, we received no response from the White House. In fact, from that date to the present, sanctions and measures that affect Cuban families on both sides of the Straits of Florida have been tightened. But not only Cubans are affected, the economic embargo against Cuba hinders U.S. medical cooperation with the island. In times of coronavirus, this cooperation could help save the lives of Americans, Cubans or people from anywhere in the world.

Right now, my family and I are bicycling through the United States, from coast to coast. We have spoken with our American compatriots, with people of diverse ideologies and creeds, about the need to build bridges of love between the United States and Cuba. In a few days we will arrive in Washington DC. We intend to bring this request to you and to the members of your administration, as well as representatives and senators and whoever who wants to hear us.

We respectfully ask that you allow us a few minutes of your precious time pass on, first hand, the request of thousands of Americans, Cuban-Americans, and Cubans that political considerations yield to human considerations.

May God bless you and your family and may God bless the peoples of Cuba, the United States and the world.

Ninety miles from our shores, the Cuban people are facing the challenges of the coronavirus. But at the same time, and as if the pandemic were not enough, these people also have to face an economic embargo that has lasted for decades. I am Cuban American and have lived in the United States for almost 30 years. One day I went to war for the United States. Fifteen years ago, as a combat medic, I assisted wounded Marines and soldiers in Iraq in the Battle of Fallujah. I consider this country my home and here I have founded a family. Currently, I am a high school teacher in Seattle. In short, the United States has been for me like a loving father who opened his arms and offered me endless opportunities. I thank this great nation for much of who I am. But, as a grateful and responsible son, I have the right and the duty to open heartedly speak to this father.

Like my feelings of love for the United States, a deep affection for Cuba also lives in my soul. There I grew up and took my first steps and there I fell in love for the first time. When I was a child, I saw how those neighbors and relatives shared with each other what little they had. In my neighborhood the miracle of the multiplication of the loaves and the fish happened daily. Mr. Biden, you probably understand what I’m talking about. Sometimes I have heard you mention Scranton, the little town of your childhood, in Pennsylvania. There you took your first steps. There you met people who, even after decades, are still your friends. I’m sure you would not allow those neighbors of yours or your children to be harmed. The same happens to me, Joe; you have your Scranton, I have my Jaimanitas. The United States is my father, but Cuba is my mother. I can’t turn my back on that one either! There is nothing sadder for a child than his divorced parents’ disagreements and quarrels. It’s as if the child’s heart is squeezed, as it breaks in two. I want my home country and my adoptive nation to shake hands. I want to build bridges of love between our two peoples. And this clamor is not only mine, it is the clamor of thousands of Americans, Cuban-Americans and Cubans.

This is why I am writing to you, because you may be the next President of the United States. I want you to know that members of my family and I are currently on a pilgrimage. We are pedaling through the United States, from coast to coast. We have cycled hundreds of miles and we will pedal for more than 3,000. We will speak with elected officials, representatives and senators, as well as ordinary people from every corner of the country. Democrats, Republicans, regardless of race or creed, we will explain to everyone the need to build bridges of love between our two nations and the imperative of lifting economic sanctions against Cuba, especially in times of coronavirus. We recently launched a campaign on Change. org, calling on President Trump to lift sanctions on humanitarian grounds. Within days, thousands of people, mostly Cuban-Americans, signed the petition. It is a general clamor that love prevail and that this time of confrontation between our countries come to an end.

In a few days we will arrive in Washington DC. That is why I am asking you for a few minutes of your precious time. We want to express to you the aspirations of millions of Americans, Cuban-Americans, and people of goodwill around the world. For all of us; political considerations must yield to human considerations. It is a time of love and understanding. The people of Scranton and Jaimanitas deserve it.