Landing in New York, the world’s showcase, is a milestone beyond the expansion of the brand: "It means that there is an opportunity for Cuban design, for the Cuban in general." 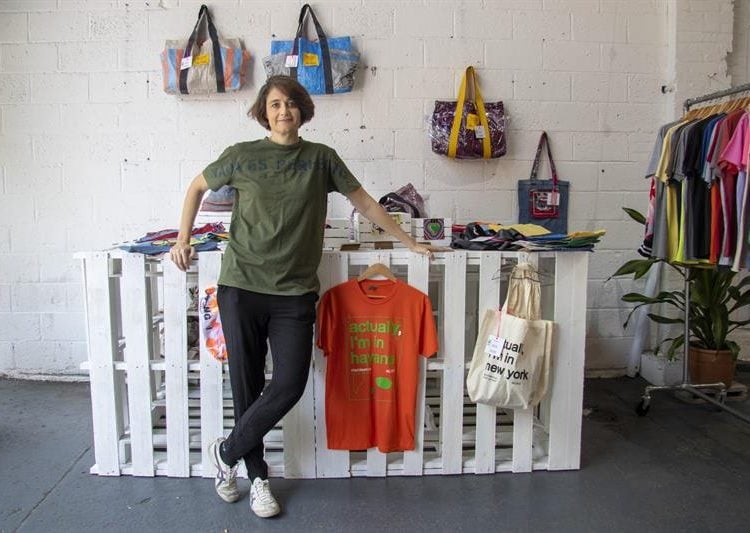 The co-founder of the fashion brand "Clandestina," Spaniard Leire Fernández, poses for EFE on Wednesday, June 5, 2019 in its "pop-up" (ephemeral) store in the neighborhood of Brooklyn, in New York. Photo: Miguel Rajmil / EFE.

With the typical Cuban humor and energy ―”Nada es perfecto” (Nothing is perfect) ―, “Clandestina,” the island’s first independent fashion brand, traveled to New York this June to offer its proposals, the result of a resilient generation with a global vocation.

In a “pop-up” (ephemeral) store in the Brooklyn neighborhood, the founders of “Clandestina,” Cuban Idania Del Rio and Spaniard Leire Fernández, receive EFE while they give the finishing touches to an inauguration, this Thursday, that will be in the purest Havanan style, with mojitos and drummer Yissy’s live music.

“We want to bring here to New York the energy there is in Cuba and that we have in our store in Havana, and that of a group of creators who are trying to put Cuban design on a global level and they are achieving it,” says Fernández.

That intention is reflected in slogans like “Nada es perfecto,” “Actually, I’m in Havana” and “País en construcción” printed on many of the shirts, skirts and bags that “Clandestina” will sell until June 24 at the New York space “The Canvas,” although its clothes also collect the idiosyncrasy of the island with other details.

For example: a shirt with flowers made from a curtain, a soft jacket type “bomber” with woven bedspreads ―which works very well among “influencers,” they say― and another shirt made with the uniform worn by the brigades that fumigate against mosquitoes to prevent dengue. “This is the ‘fumigueitor,'” jokes Fernández.

One of the major exponents of self-employment in Cuba, “Clandestina” is a private enterprise that opened in 2015, after two years of bureaucracy and in a socio-political context of some openness, but that has grown “dancing the lambada” and learning from the mistake to “tell the reality of common people,” she explains.

Now, thanks to “a lot of work,” good timing and “many people wanting to change things,” the firm employs a group of 32 workers in its well-known Havana store, distributes online to the whole world and also offers pieces in a “retailer” in Miami (U.S.).

But landing in New York, the world’s showcase, is a milestone beyond the expansion of the brand: “It means that there is an opportunity for Cuban design, for the Cuban in general, to say: OK, this piece exists, these people have made it, it’s possible. A little window of fresh air, hope,” says Del Rio.

And the “Clandestina” group knows of vicissitudes but also of “resilience”: there the raw material comes mainly from the second-hand market, since the “fashion sector is depressed, it’s nonexistent, and there’s no technology to produce,” says the designer, who extols the value of crafts such as sewing.

“We don’t feel creatively limited, but we do understand that we are facing serious limitations and we turn that around,” says this entrepreneur selected in 2016 to speak with the former president of the United States, Barack Obama, during his historic visit to the island after restoring diplomatic relations.

Given the hard line of the Donald Trump government, which this week has further restricted Americans’ visits to Cuba, the founders of “Clandestina” remember the “first impact” of the president on their business: in 2017 they lost “50% of the market, because American tourists were important.”

The year “2017 was a disaster, in that sense, for many people who were starting (their business). With Obama they had hope and when they opened, which takes a long time, here comes Trump,” says Fernández, a former UNESCO worker who has been in Cuba for 12 years and has taken up the popular local saying “lo que sucede, conviene” (what happens, is for the best).

“You always look for an opportunity, and our chance with Trump was to discover our local community,” she confesses, sitting next to Del Río between clothes racks with colorful garments that are mostly recycled and with stories behind them. “It’s not a business to get rich,” she says.

Although there are more local clients than tourists, Fernández and Del Río share a vision of global enterprise: they want to “create a real commercial flow” and contribute to Cuba’s growth, especially for the young people who are “not so connected to the philosophy of the Revolution” who often choose to emigrate.

Opening this “pop-up” store in the Big Apple, and another in Washington DC at the end of the month, “is important” in the Caribbean country, reiterates Del Rio, who considers herself “heir” to the Cuban idea that talent must be exploited, and formed in an artistic education that allows you to ascend even if you come “from below.”

“We had a lot of energy in that we have to create a global brand that people see as Cuban, with all the incredible and fantastic things that Cuba has but aligned with global trends,” concludes the designer, who sums up this initiative as a “bridge of understanding” between Cubans and foreigners.