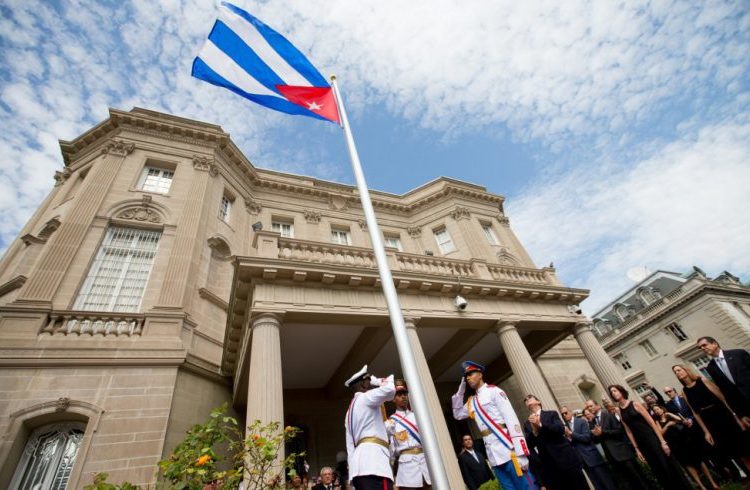 Hoisting of the Cuban flag in the embassy in Washington. Photo: Andrew Harnik / AP.

The Cuban delegation expressed its “strong protest” regarding U.S. President Donald Trump’s speech at the UN during the first Bilateral Commission meeting held under the Republican president’s administration.

The U.S. Department of State, which reported yesterday about the meeting in a press release, did not mention the Cuban protest, which the island’s Foreign Ministry did specify in a communiqué.

“In the wake of the disrespectful, unacceptable and meddling statements made by President Donald Trump in his address to the UN General Assembly at a time when the US-Cuba Bilateral Commission was sitting in session, the Cuban delegation voiced a strong protest,” the Cuban Foreign Ministry said.

The United States and Cuba held in Washington their sixth Bilateral Commission – a mechanism created in 2015 for the normalization of relations – after the last meeting during the Barack Obama administration in Havana last December.

The meeting took place on the day that Trump called the Cuban government corrupt and reiterated that the economic embargo will not be lifted until there are reforms.

In this sixth meeting, the Cuban delegation reiterated its rejection of “the rollback in bilateral relations, the measures for the intensification of the blockade and interference in domestic affairs, the confrontational rhetoric and the political manipulation of the issues of human rights used as a pretext to justify them.”

It also criticized “the tying of any improvement in bilateral relations to the introduction of changes in the Cuban constitutional order.”

In its press release, the United States stressed that the meeting served as an opportunity to deal with the incidents that affect the diplomatic personnel in the U.S. Embassy in Havana, referring to the supposed acoustic attack that affected at least 16 of its diplomats.

It reiterated its deep concern for the safety of the community at the U.S. Embassy in Havana and the urgent need to identify the cause of those incidents and guarantee that they cease.

In addition, it stressed that “the Cuban authorities have shown keen interest in both clarifying this matter, and on instructions from its senior government, completing the investigations in progress, for which purpose, cooperation from the U.S. authorities is essential.”

Also as part of the meeting, according to the U.S., the delegations reviewed the U.S. administration’s priorities and the areas of compromise in the interest of the United States and the Cuban people, including human rights, the implementation of the migratory agreements and protecting the national security and public health of the United States.

The Cuban side expressed its “readiness to actively implement the bilateral accords that have been formalized over the past two years and delivered specific proposals in the name of Cuban entities to advance bilateral cooperation in areas of mutual benefit, including environmental protection, law enforcement, health, agriculture, hydrography and geodesy, among others.”

The U.S. delegation was headed by Deputy Assistant Secretary of State for Western Hemisphere Affairs John Creamer, while the Cuban was headed by Josefina Vidal, general director of the US Affairs Division of the Cuban Ministry of Foreign Affairs.

Cuba and the United States announced the reestablishment of diplomatic relations on December 17, 2014, an event that officially materialized in 2015 with the reopening of their embassies.

But the normalization initiated by Raúl Castro and Barack Obama has suffered a reversal since Trump announced changes in the Cuba policy last June.

In addition, due to the mentioned acoustic incidents, Secretary of State Rex Tillerson said in an interview with the CBS chain that the possible closure of the embassy in Havana is being assessed by the Trump administration.