What has happened between Cuba and the U.S. is closer to a novel, whose plot becomes more complicated in each chapter. 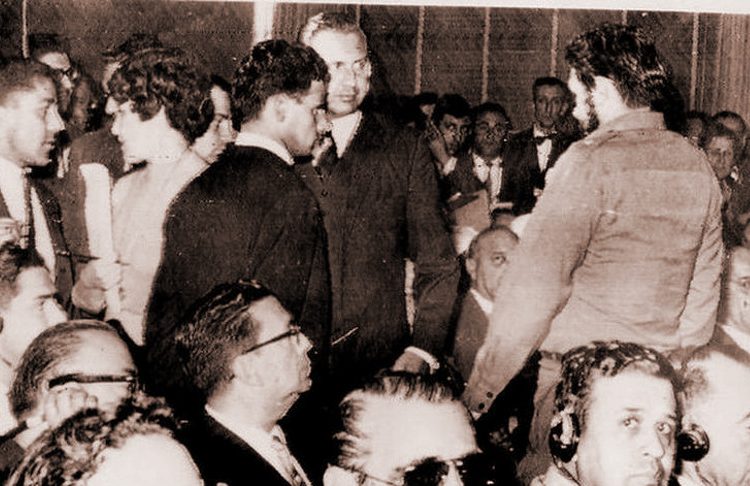 “Cuban blacks look directly into the eyes of whites,” noted an impressed U.S. visitor in 1907: “To the American at home, the negro as a social, political or even industrial equal is an affront, an offence, nothing less; to the Cuban he is not. It is because in Cuba the negro…is not everywhere confronted and made hard in thought and feeling…. Schools, churches, theatres, hotels, baths, street-cars, steamers, all are the black man’s and white man’s alike.”

This is how R. L. Bullard described the differences between Cubans and Americans, in The North American Review, less than five years before the massacre of the Independent Party of Color. Obviously, this U.S. army lieutenant colonel’s vision of interracial relations in Cuba was not that of a Cuban who lived on the island, and even less that of an anthropologist or sociologist. Usually, those who come to visit look at things with the glasses they bring. However, even if it is an idealization of Cuba as a “racial democracy,” when looking at it with the polarized lenses of the United States, this military officer did not only reflect the remarkable differences between the two sides.

Bullard: How Cubans differ from us Americans.

Even today some Americans seem puzzled to discover that, compared to the U.S., where a drop of African or “Latino” (Hispanic, in the Census jargon) blood disqualifies them as white, in Cuba, whoever “seems white” automatically is so on paper. In fact, you may not even be black or white, but mulatto, for centuries. That mulatto (formerly “brown”), however, appear today in official documents as “mestizo,” a census category that does not exist in the U.S., but is present in Latin America and the Caribbean.

Naturally, no category or generic term exhausts the representations about skin color and somatic features that really exist in Cuban society, which the anthropologist Jesús Guanche took the trouble to compile in a list of 20 “popular phenotypes.”1 Compared to this, the U.S. categories are rather bland.

The weight of the American in the construction of Cuban identity, recognized by Fernando Ortiz in his theory of the melting pot, has been thoroughly documented in works such as those of the great historian Louis Pérez Jr., in the same way as the unusual weight of Cuba in the northern imagination, since the 18th century, as well as in the monumental collection and editions of Emilio Cueto. That Cuban-American space is not only symbolic, but so tangible that it allowed blacks and whites from both sides to play for the first time on the same baseball field, decades before Jackie Robinson did so in the United States.

This meeting between societies, essential to understand Cuba-U.S. relations, has always been made up of multiple layers and nuances, which permeate not only the mutual perceptions below, but also above. Seen with lenses from the North, Cubans have lacked, for example, any appreciation for the rule of law, according to an influential reporter in 1917: “We have given them the great gift of freedom and constitutional government, but we have never taught them how to use them…. Our responsibilities therefore do not end in giving Cuba the forms and titles of freedom. We have to help keep Cuba libre, saving Cubans from themselves.”2

Why this “heavy burden of the white man” about Cuba―among all the lands in the world―for the United States? How to explain its excessive space in the American mind, before the Soviet threat, the cold war, communist totalitarianism and other abominations emerged? Will it be the quintessential imperialist ideology? The monopoly interests of corporations? Recurring racism? The evil condition of its rulers?

The explanation for this comes from a founder: “I candidly confess that I have ever looked on Cuba as the most interesting addition which could ever be made to our system of states. The control which, with Florida Point, this island would give us over the Gulf of Mexico, and the countries and isthmus bordering on it, as well as all those whose waters flow into it, would fill up the measure of our political well-being.” This is how Thomas Jefferson explained that “good spirit that loved freedom and instilled strength in sleepy people” (according to Martí) to President Monroe, anticipating 75 years of military intervention on the island, and what we modernly call geopolitics.

In the summer of 1960, American oil companies did not like the idea of ​​refining Russian oil. But they were willing to do it. It was the Secretary of the Treasury who let them know that they should not accept it, in the best interest of the United States, as Ambassador Philip Bonsal himself regrets in his memoirs. What followed was the application of Cuban law from before 1959: the companies were nationalized. That fact, naturally, gave a boost to the spiral of U.S. sanctions already underway, and led to the conflict with the massive nationalizations in October of that year.

However, it was not those nationalizations that brought bilateral relations into a collision course. The CIA’s 500-man infiltration plan devised in late 1959, which Eisenhower officially stamped in March 1960 (when they already reached 1,400), was under development almost a year earlier, with Operation Pluto, better known later as the Bay of Pigs invasion. So the Treasury Secretary’s orientation was part of a hot war that dragged Esso and Texaco with it, not the other way around.

This detailed sequence illustrates that neither the nationalizations nor the strengthening of relations with the Soviets determined the plan to forcibly sweep away the Revolution, but a geopolitical reason, not only reducible, incidentally, to an ideology, to an imperialist vocation and less to a presidential personality. The logic that hierarchized the geostrategic environment was joined to the idea of ​​preserving, to put it in Jeffersonian terms, “the political well-being” of the United States.

Of course, the definition of this well-being and the means used to achieve it are not insignificant. Politics is precisely about identifying the national interest and choosing the means to achieve it. So changing these means, even if it is to try to achieve the same goals, is significant. I mean, except for those who don’t see differences between aircraft carriers and cruise ships. A discourse that does not pay attention to these distinctions is equivalent to that of a physicist who, in order to differentiate similar elements or isotopes, some stable and others very unstable or radioactive, prefers a watercolor rather than a spectroscope (and paints them more or less the same).

Recognizing geopolitical reason is also not equivalent to admitting the droit de seigneur of a great power over a certain space where others live. The same reason advises precisely to compensate the geopolitical imbalance, for example, through a policy of alliances. When it became clear―to the Cuban government and to the large landowners―that the United States was irritated more over the style of that Revolution than even at its moderate reforms; when it was clear that something was going to go wrong between the two, once again, the young government launched its ambassadors around the world, looking for allies, wherever they could be found. “It was a mistake to ally with the USSR and communism” is a phrase repeated ad nauseam, as if Cuba had too many open doors at the time. What some dismiss as an irrepressible ideological drive―in Cold War jargon, “exporting the Revolution” and “becoming a Soviet beachhead”―occurred amid a critical political situation of survival.

The private conversation that Che and Richard Goodwin had four months after the Bay of Pigs invasion is quite well known, where he had the impression that “Cuba wanted an understanding with the United States.” Less is known about some details of this dialogue. According to the report of the JFK senior adviser, Che stated that Cuba was willing to compensate the companies nationalized the year before (“by commercial means”), not to establish political alliances with the socialist bloc (although they did maintain relations and express sympathies) and suggested that they would accept “even discussing the issue of the activities of the Cuban Revolution in other countries.” For Goodwin, Che only set a limit: the Cubans were not going to discuss “any formula that implied abandoning the type of society they were dedicated to.”

In order to respond to this olive branch offered by none other than Che Guevara, Goodwin recommended to JFK emphasizing economic warfare, “direct sabotage activities against key sectors of the economy,” carry out unannounced military maneuvers, “continue and raise the level of covert actions” and “create a Security Pact in the Caribbean,” that antagonizes the “psychology of peaceful coexistence that Castro is trying to create” and can “serve as a screen for some of our activities.”3

When looking closely at this fact, one cannot help but wonder what would have happened if the U.S. had sat down to talk with a government so threatened, in the midst of a civil war situation, that nevertheless responded with an olive branch. What would have happened is not a waste of time, both to those who present the Revolution as a kind of syntactic error in the grammar of History, as to those who believe, on the contrary, that this story springs from an invisible hand that writes with a single calligraphy, almost like dictation.

For those liners on both sides, what has happened between Cuba and the United States is a tragedy or an epic, when in reality it is closer to a novel, whose plot becomes more complicated in each chapter.

It is somewhat rare that Cuba “exported the Revolution” and, at the same time, orbited as a “satellite of the USSR,” when the Soviets never really liked “Cuban guerrilla adventures” in Latin America and Africa. In any case, if those were the two engines driving the Cuba-U.S. conflict, the “exporting the Revolution” to Africa and Central America ended in the late 1980s and the USSR ceased to exist in the early 1990s.

Thus, the enigma seems to be: what has kept that plane flying, with its two engines not working? Perhaps it was that the core of the conflict was really, paraphrasing the limit drawn at that meeting in Punta del Este, in “the type of society to which [Cubans] were devoted.” In other words, the system itself.

If so, does it means then that it is not geopolitics, but Cuban domestic policy that is the real source of the conflict? Or that, on the other hand, that source has moved from Washington to South Florida? Would it mean, then, that the course of relations depends on how the changes are moving on the island? Or rather from a squad of uncompromising Cuban-American congressmen who keep the antagonism alive?

If an effort were made to understand the present and the future as the flow of a complicated history, and not just like that “bilateral dispute” that some repeat, the first thing would be to identify the basic questions to have a glimpse of the horizon of those relations, behind the opinions that cloud it. What these questions are would require a moment’s pause.

Spanish judge dismisses lawsuit against Meliá over land in Cuba