About the recent talks between high-level representatives of the governments of Cuba and the United States and the next Summit of the Americas to be held in Los Angeles. 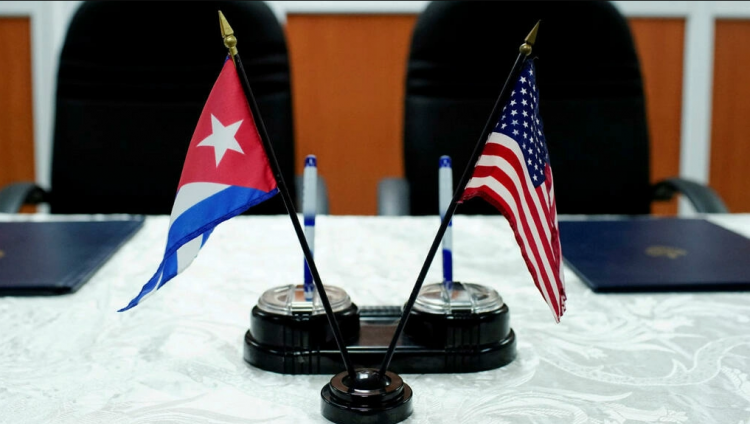 A view of the Cuban and United States flags taken before the signing of the agreements between the Port of Cleveland and Cuban maritime authorities in Havana on October 6, 2017. Alexandre Meneghini/Reuters

On April 21, migration talks between Cuba and the United States took place in Washington. It was the first time since 2018 that high-level diplomats from both countries sat down to negotiate, as the State Department itself acknowledged in its subsequent statement on the matter. This fact has raised the question of whether this means the end of the freezing of diplomatic exchanges between the two governments, applied by the Donald Trump administration as of the first year of his term in office, or whether it is an isolated phenomenon that is due to the dynamics of U.S. domestic policy.

It is a commonly accepted premise in the practice of international relations that diplomacy, both bilateral and multilateral, is an irreplaceable instrument for a State to materialize its national interests, especially when it comes to reaching agreements with neighboring countries on conflicting issues of mutual interest, as it is in this case. That, of course, is true especially if you want to avoid an escalation in situations that affect national, regional or global security or stability.

The latter is what is happening with the increase in illegal Cuban migration to the United States in recent months. The current situation is not unprecedented. Migratory peaks have already happened before in 1980 (Mariel) and 1994 (called the Rafters Crisis). As during the latter, the perverse combination of an internal socioeconomic crisis, together with an increase in U.S. unilateral coercive measures and the already established policy of encouraging illegal departures from Cuba and disorderly entry into the United States, have produced a situation fraught with instability and dangers that affect not only individuals but both countries as a whole and the entire region.

In the history of the conflict between Cuba and the United States since the triumph of the Revolution in 1959, there has not been much room for diplomacy to play the role it should play. The cause of this, without a doubt, has been in the U.S. policy of seeking to impose a regime change in Havana against the will of the Cuban people. There have been few moments in which there have been normal diplomatic ties and exchanges between the two countries. When there have been, both sides have benefited. Although there have been instances of secret exchanges, as Americans William Leogrande and Peter Kornbluh have shown in their well-known work Back Channel to Cuba, the prevailing trend is to hope that the United States can undermine the legitimacy of the Cuban government by refusing to sit down at the negotiating table with its representatives.

This retrograde, arrogant and counterproductive position was clearly expressed by the three U.S. congresspersons of Cuban origin (María Elvira Salazar, Mario Díaz-Balart and Carlos Jiménez) in the letter they addressed to Secretary of State Antony Blinken on April 21, who were against the holding of the migration talks between the two countries. In it they allege that holding them is “legitimizing an illegitimate regime.” For this vision of U.S. foreign policy, it is not at all important that more than 190 states maintain diplomatic relations with Cuba or that the Cuban government demonstrates over and over again that its most important political and legislative initiatives are supported or at least approved by a clear majority of citizens, as in the case of the 2019 constitutional referendum. Nor does it matter that, despite difficulties and errors, the Cuban government is one of those that has best managed its confrontation with COVID-19.

In this case, as on previous occasions, the existence of a crisis forced the United States to take the initiative and request the diplomatic talks that took place on April 21, as announced. Both governments issued separate statements in this regard. They can be read here and here.

It was clear that with this step the regular diplomatic talks would resume, as U.S. Secretary of Homeland Security Alejandro Mayorkas predicted might happen. What the U.S. side did not clarify is whether it will take the necessary measures to restore the migratory agreements, which would imply that the Consular Section of its Embassy in Havana provide all the usual services to Cuban citizens.

The State Department statement is characterized by the almost absence of anti-Cuban propaganda, the recognition of the validity of the migratory agreements reached through diplomatic channels since 1995, the reiteration that the consular services of the Embassy in Havana will be partially opened (arbitrarily closed in 2017 alleging “sonic attacks” that could never be proven) and by the following statement:

“The U.S. delegation highlighted areas of successful cooperation on migration, while also identifying issues that have been obstacles to fulfilling the goals of the Accords. Engaging in these talks underscores our commitment to pursuing constructive discussions with the Government of Cuba where appropriate to advance U.S. interests. These discussions represent the first Migration Accord talks between the United States and Cuba since 2018.”

The Cuban statement denounced all the U.S. breaches, which is explained because it has been the United States that has broken the agreements, has increased unilateral coercive measures and has refused to hold the talks in various areas agreed with the Obama administration in 2014- 2017. The Cuban side has repeatedly insisted that it is willing to resume the agreed normalization process. The Biden administration has refused to do so and has used all kinds of excuses to not even deliver on the campaign promises the president himself made in 2020.

On April 26, a few days after the talks, President Miguel Díaz-Canel clearly explained the Cuban position in his closing speech at the 4th Plenum of the Central Committee of the Communist Party of Cuba: “It is positive that the migratory rounds of talks have been resumed, but this is not enough. The United States must fulfill its commitments with the current migration agreements.” He thus indicated that the Cuban government will continue to negotiate diplomatically but that it will demand respect for its sovereignty and integrity. At the same time, he clarified: “Cuba has complied to the letter with its commitments with the migratory agreements, and with the help of the people we will continue to comply and avoid illegal, unsafe and disorderly migration as much as possible.” With the latter, he made it clear that the accusations coming from U.S. political figures, such as Senator Marco Rubio, who allege that Havana encourages illegal migration to harm the United States, are false.

But the matter has a regional dimension, as recent statements and actions by Foreign Ministers Bruno Rodríguez and Marcelo Ebrard, of Cuba and Mexico, respectively, have shown. The Cuban denounced that the United States was maneuvering behind closed doors to avoid Cuba’s presence at the Summit of the Americas, scheduled for June of this year in Los Angeles and that, in addition, it had excluded it from its preparatory work, which includes the migration issue as a priority.

The Mexican announced that his president, Manuel López Obrador, would raise the problem with his U.S. counterpart in a telephone conversation that actually took place on April 29, as confirmed by Ebrard himself. In his Twitter account, the Mexican foreign minister stated the following: “In a conversation between Presidents López Obrador and Biden, two issues were discussed: addressing the causes of migration with much greater investment in Central America and preparing the Summit of the Americas in which all countries, without exception, should be present. Monday we start visits and negotiation.” He was thus referring to a trip he will make to Washington starting May 2 and talks he will hold there with Secretary of State Antony Blinken.

It is clear that regional migration problems cannot be effectively addressed without a joint effort by all the States of the Hemisphere. That is the position of the Mexican government, which Washington knows and which will be very difficult for it to deny.

Furthermore, in the Cuban case, the most logical, appropriate and pertinent thing is for its government to participate in the preparatory meetings for the preparation of a document on another key regional issue that will be addressed at the Summit: recovery and resilience of health systems after the pandemic. The existence of this document was revealed on March 24 by Dr.Carissa F. Etienne, director of the Pan American Health Organization (PAHO). Cuba is not only a member of this regional institution but has made important contributions to the subject. Therefore, it is another argument to show that the United States should not exclude it.

In this context, the statements of Assistant Secretary of State for Hemispheric Affairs Brian Nichols on April 24 in a telephone conversation with a small group of journalists seem extemporaneous and premature when he said that the invitation to the event is “unlikely,” not only to the Cuban but also to the governments of Venezuela and Nicaragua.

If this negative forecast materializes, the Joe Biden administration will further reinforce its retrograde vision, more typical of the Cold War, in hemispheric relations and will run the risk of creating another conflictive moment in this multilateral diplomatic initiative that has already suffered several setbacks in Mar del Plata in 2005, in Bogotá in 2012 and in Lima in 2018, which Donald Trump did not attend.

There is no reason to be optimistic but neither does it seem that the door has been closed definitively.

On the other hand, on the Cuban side, there is greater activism in the field of public diplomacy. Not only did the foreign minister give the noted information to the press, but Deputy Minister Josefina Vidal (in charge of relations with Latin America and the Caribbean) gave a joint interview to the AP and CNN on the issue of migration, and Deputy Minister Carlos Fernández de Cossío (in charge of relations with the United States) spoke with the U.S. Democracy Now website on April 26 and with Cuban-American academic Arturo López Levy on hi blog Conversaciones Americanas on the 24th, after the holding of the talks he led.

The need for diplomatic exchange between Havana and Washington has been a position of principle held by the Cuban side for years. The U.S. side, however, has been reluctant to admit it. But the reason for this attitude should not be sought in the bilateral, regional or international space, but rather in the domestic one. The United States, as a great imperial power, tends to use diplomacy arbitrarily and often as a cover for the use of other unmentionable instruments. In the Cuban case, it was President Obama who explicitly recognized its usefulness in managing the conflict with Cuba and reaching normal relations. Biden and his collaborators, blackmailed by Senator of Cuban origin for the state of New Jersey Bob Menéndez, have chosen to abandon that path, ignoring the history lessons. However, it may be that political reality inevitably forces them to sit down at the table and talk.