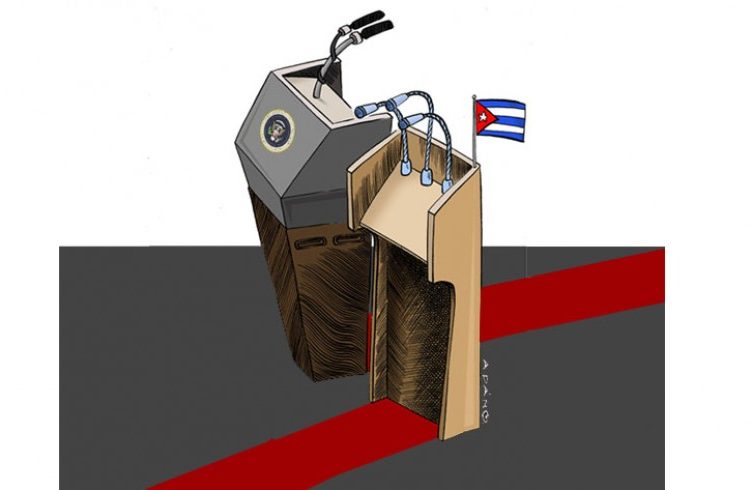 Nearly a week after Cuba and the United States began to officially dialogue in Havana, entrepreneurs, bloggers, filmmakers and Cuban intellectuals gathered in Washington for two days (January 27 and 28) to exchange with US and Cuban American politicians, diplomats, journalists , businessmen and academics, in a meeting organized by the Possible Cuba Project and the Cuba Research Center.

“Cuba and the United States in time of changes” was the name of these debates, attended by more than 10 Cubans and where they discussed cultural ties between the two countries, the current policy challenges in the island, Cuban civil society, the need to improve the mechanisms of democracy in Cuba, the potential economic ties between the two for the immediate future, among many other critical issues.

OnCuba contacted three participants on the Cuban side (Julio César Guanche, María Isabel González Alfonso and Roberto Veiga), and sent them several questionnaires to know their assessments for the resulting balance of those two days in Washington, points of conciliation and conflict detected at the meeting, and the challenges for a possible normalization of bilateral relations.

By the very nature of the debates, with a plural intervention of speakers, there were points of agreement and points at which all parties did not agree. The need to look at Cuban civil society with open mind and the opportunity for both countries could mean the December 17 announcements and subsequent negotiations, were among the most consensual ideas.

Roberto Veiga Gonzalez is coordinator with Leinier Gonzalez of Cuba Possible, a national project that, according to his own words, aims to continue accompanying, in a positive and creative way, the ongoing process of reforms taking place in Cuba.

Veiga defends the view that in the meeting “Most acknowledged that both societies could benefit from each other and that Cubans could contribute the advantage of the bilateral relationship for the development of the country, with a greater social balance, evolve at the same time the current sociopolitical-economic model.¨

However, he also contends that, after talking for long and intense days, “almost all realized that we know less than we imagined and that we do not yet properly envision how to institutionalize and strengthen relations between the two countries”.

One of the points discussed was that of human rights in Cuba. In the opinion of Veiga and other participants in the event, the Cuban model should make big changes, and to make it “we surely will learn a lot from the US, but we the Cubans must be who decide what those changes will be and how to achieve without interference of foreign powers or mechanisms of subversion. ”

Veiga agrees with essayist Julio César Guanche regarding the need, in the remainder of the Obama term, and three years more Raul Castro has as president of Cuba, “they can follow a schedule of steps fully designed and specified to their concatenation and achievement, make of these measures, if not irreversible, at least very difficult to disassemble “.

Guanche, who presented a text in the “Current Debates in Cuba” panel tells us that the points of conflict are not big news. However, the researcher argues that “it is important to place different perspectives on the same space for discussion. Thus, differences remain, but decrease the dogmas of faith and mutual ignorance. ”

To Guanche, the advantages of this type of exercise are not only related to Cuba-USA relations. The essayist goes further and explains that regardless of the course of these negotiations, “in Cuba we need much more communication within Cuban society, and many more roads horizontally between positions” not necessarily coincident” on this process in relation to USA, as on many other issues. ”

Other points of disagreement with the prospect of negotiations, according to Guanche, resided in the fact that US policy is focused on promoting small and medium private enterprises in Cuba, understanding that greater independence from the state provides higher levels of autonomy in political action.

“However –Guanche said-, Cuba policy is based on the opposite, in boosting foreign direct mega investments and maintaining its administration in the state sector of the economy, understanding that this can prevent concentration of ownership and redistribute income. Out of this contradictory logic we can expect the emergence of obstacles to the further deployment of relationships. ”

Speaking of other possible obstacles Guanche mentions that normalization “extends consequences that not only refer to a new political attitude by official parties, but also to learn the culture of relationship between societies with little recent interaction, and moral codes for us Cubans to interact after having paths of mutual hostility. ”

Another who agreed to answer some questions about the debates in Washington was the member of Cuban Americans for Engagement (CAFE), María Isabel Alfonso, who says that one of the points where discussions found consensus was regarding the need to extend the mechanisms for citizen participation in Cuba.

“Inside it, Alfonso says, it is included the need for more extensive than the current law on associations, which verify a better legal institutions in the field of human rights”.

Strengthening diplomacy between Cuba and the United States and the need to strengthen people to people relations was on the table too. Alfonso believes that these relations are one of the most effective ways to exercise diplomacy and “discrete steps in specific areas of cooperation (culture, music, sports) are achievable and vital for Cubans.”

Alfonso considers these points of soft diplomacy, “may prepare the ground for conversation on over thorny issues such as human rights (…)”.

On regard the prospects for educational exchanges, Alfonso said the Cuban delegation presented several proposals, including the creation of a Fullbright program between Cuba and the US and the possibility of an American university in Cuba, “actions which, if considered its implementation, surely will occur in the very long term. What one can sense it is a boom in the programs of American universities in Havana “.

Among the actions to implement in a shorter term, “would be the continuation of a program of visas and scholarships for Cuban students, but without ideological filters (…). Another issue mentioned was the importance of teaching English in Cuba, which would be an important premise for all types of academic exchange, “said Alfonso.

The event also had space for some of the most crucial for the future of the negotiations, some of which Raul Castro recently demanded the US administration to restore the normal course of the restoring of relations. According to the interviewed participants, although these topics were not mentioned, they were present as a backdrop in the discussions.

Some of them were the keeping of the economic embargo, the issue of compensation for US properties nationalized in Cuba after 1959, Cuban claims for losses that the blockade caused, the claim for devolution of the naval base at Guantanamo, the controversy surrounding the keeping of the Cuban Adjustment Act…

Last week, Fidel Castro sent a letter to the University Student Federation, which exposes his lack of trust in the intentions of the United States and its policies. Remembering this letter, Alfonso says “That does not mean you should not try to build a culture of trust, in which the responsible thing to do is to encourage the positive.”

Her words are quite realistic about it: “Capital is needed, investment, academic and educational contacts, overcoming, attract emigrants back even for repatriation to the country of their birth. It is important to replace the culture of domination and resistance in a respectful and civilized coexistence, however difficult so be it, with the asymmetry with respect to the US in the history of the Cuban nation is inserted “.

Roberto Veiga thinks, meanwhile, that success in restoring bilateral ties requires that “both societies and both states get to know each other more and more, and that the generality of the actions that are undertaken from both parties is marked by the ability to generate political trust “.

And Guanche tell us flatly: “The same understanding of what to understand by normalizations is a major challenge, when they were not before almost never” normal “. In the “almost never” lies a possibility for today. “