Dr. Valdés-Sosa, speaking on behalf of the group of experts, reaffirmed the ACC’s willingness to review these conclusions if new evidence emerges and requested that they be refuted in a climate of open scientific collaboration. 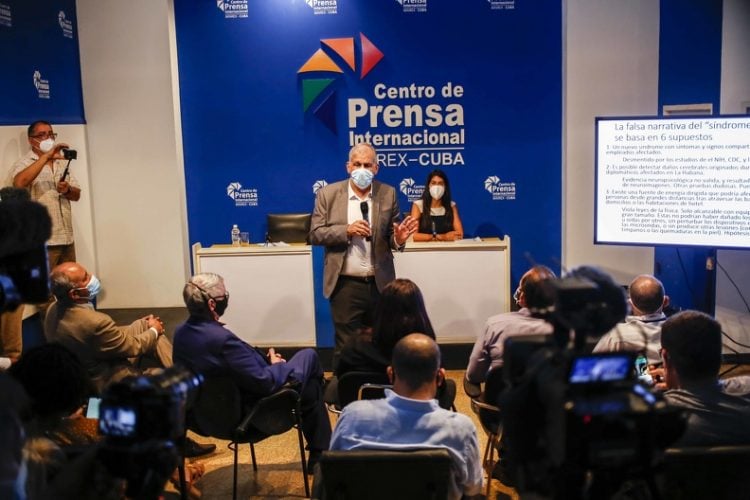 Dr. Mitchell Valdés-Sosa (standing), director of the Cuban Center for Neurosciences, during a press conference in Havana on September 13, 2021, on the results of the Cuban investigation on health incidents suffered by U.S. diplomats in Cuba. Photo: Ariel Ley Royero/ACN.

Cuban scientists refuted the existence of the so-called “Havana Syndrome” and the narrative that supports it, according to which the health incidents suffered by U.S. diplomats in the Cuban capital, and more recently in other world capitals, are due to a single ailment resulting from attacks against them.

A technical report prepared by a group of experts from the Cuban Academy of Sciences (ACC) concluded that “the evidence used to support the ‘mystery syndrome’ narrative is not scientifically acceptable in any of its components” and that said narrative “has survived thanks to a biased use of science, in which dissenting points of view have been suppressed.”

Dr. Mitchell Valdés-Sosa, director general of the Cuban Center for Neurosciences (CNEURO) and head of the committee of experts, said that the evaluation presented this Monday constitutes the first document in which Cuban researchers examine all aspects of the problem based on all the published information, on close consultation with foreign scientists and on the police report of the Cuban Ministry of the Interior.

According to the researchers, the evidence points to the possibility that some U.S. employees located in Havana felt ill due to a heterogeneous collection of medical conditions, some pre-existing before coming to Cuba and others acquired due to simple or well-known causes.

Many diseases that affect the general population, they said, can explain most of the symptoms, therefore there is no novel syndrome, and only a minority of people have presented a detectable brain dysfunction, most from experiences prior to their stay in Havana; others for well-known medical conditions, they said.

They added that no known form of energy can selectively cause brain damage (with spatial precision similar to a laser beam) under the conditions described in those events. And although there are weapons that use sound or large microwaves, there is no possibility of them going unnoticed.

Neither the Cuban police, nor the FBI, nor the Royal Canadian Mounted Police have discovered evidence of attacks on diplomats in Havana, despite intensive investigations, they stressed.

They noted that psychogenic and toxic explanations for many symptoms in some cases were rejected for proper investigation, despite the fact that all conditions for the psychogenic spread of the discomfort were present, including a likely inadequate initial medical response, early U.S. government backing for that theory and sensationalist media coverage.

Dr. Valdés-Sosa, speaking on behalf of the group of experts, reaffirmed the ACC’s willingness to review these conclusions if new evidence emerges and requested that they be refuted in a climate of open scientific collaboration.