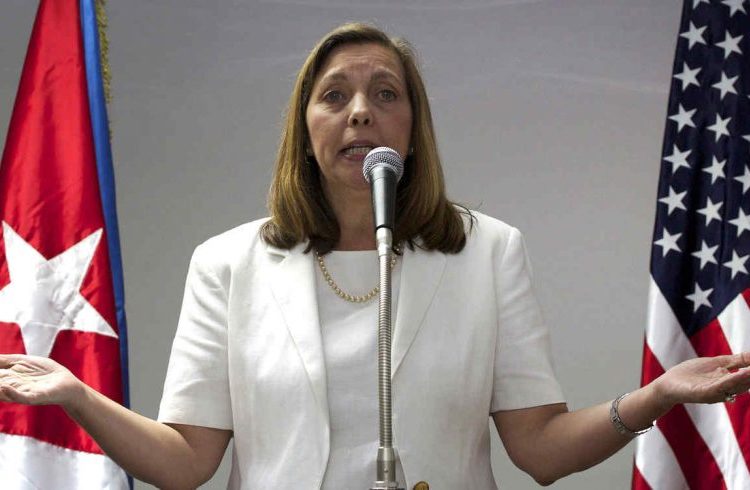 The general director of the Cuban Foreign Ministry’s U.S. Department, Josefina Vidal, during a meeting with journalists after participating in talks with representatives of the United States in Havana, January 22, 2015. Photo: Desmond Boylan / AP.

Josefina Vidal, the public face of Cuban diplomacy in the process of normalization of relations with the United States, is leaving her post to become ambassador to Canada, according to the Cuban press.

Vidal was sworn in yesterday together with another 37 officials in a ceremony presided over by President Raúl Castro.

The Cuban government still hasn’t publicly announced who will replace them in their posts at the Foreign Ministry (MINREX).

According to Carlos Alzugaray, an international analyst and former diplomat, this change is due to MINREX’s calendar for the rotation of ambassadors.

Alzugaray considers that it’s a promotion for both officials. “This is, in the first place, a sign that they have done a good job because they are being stationed to two diplomatic missions of fundamental importance for Cuba. And, on the other hand, it is obvious that a new stage with the United States has begun. Officials as capable as those who have just been rotated will probably be appointed. Cuba’s foreign service has sufficient officials with experience to attend to relations with the United States, according to the circumstances.

“In the case of Josefina, she still hadn’t been appointed an ambassador. From that point of view it is a promotion for her. Moreover, relations with Canada are going very well if we take into account Prime Minister Justin Trudeau’s visit to Cuba and what that means,” he added.

Alzugaray explains that it is unusual to retain officials for more than the three years they must serve in Havana.

FIGURES FROM THE THAW

Vidal and Machín have been the two most important Cuban public spokespersons in the negotiations with Washington. Both gave periodic reports to the press about the state of diplomatic relations established two years ago. In addition, they maintained an open and direct communication line through their twitter accounts, something not very usual among mid-level and high-ranking officials in Cuba.

With an extensive diplomatic career, Vidal is a graduate of the Moscow Institute of International Relations. She worked as a diplomat in France and between 1997 and 1999 she was the principal specialist of the Cuban Foreign Ministry’s North America Department. She was the first secretary of the Cuban Interests Section in Washington (1999-2003). In 2012 she was appointed to the post she held until yesterday. She is also a member of the Central Committee of the Communist Party of Cuba.

She is considered a specialist on U.S. affairs and a profound connoisseur of relations between both countries. An intelligent woman, a sagacious and firm negotiator capable of talking with the most dissimilar interlocutors. She demonstrated this before and after 17D.

Josefina was the interlocutor of Assistant Secretary of State for Western Hemisphere Affairs Roberta Jacobson, who headed the first official talks with Havana. That for the first time the representatives were women was taken in its time as another sign of change and a good omen.

In 2015 Vidal was included among the list of most prominent Global Thinkers made out every year by the magazine Foreign Policy, together with Roberta Jacobson and White House officials Blanca Ricardo Zúñiga and Ben Rhodes.

Relations between Cuba and the United States are going through a different moment after President Obama left office and the arrival to the White House of Donald Trump, who has explicitly made known his interest in rolling back the rapprochement policy his predecessor initiated.

Another two voices with a weight in the rapprochement promoted by Barack Obama and Raúl Castro are being moved with Josefina and Machín. Two officials who established a way of talking about the new era between Cuba and the United States and were capable of perfecting a dialogue that by force had to be of a new type.

Traffic accidents cause losses worth millions in Cuba