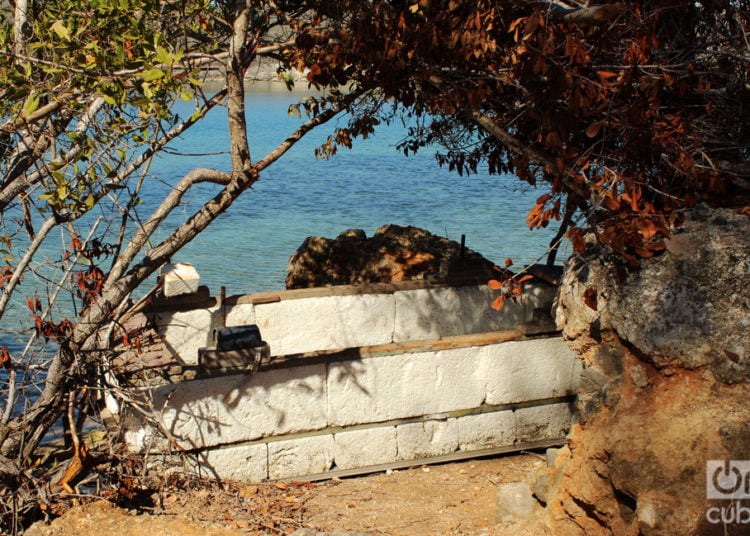 About thirty people live alone in the middle of the Cienfuegos Bay. Cayo Carenas can only be reached by sea, in boats or speedboats. In that flat land of about 20 hectares there were about forty houses before. Today, perhaps a dozen may be found.

The historians of Cienfuegos tell that the first French pirates settled in Cayo Carenas, almost in the center of the bay of that southern province. The site was known as the “Key of Jagua” and there was an arms center during the War of 1895, then hostels and fishing clubs with a very typical architecture appeared. In 1966, filmmaker Humberto Solás filmed the second story of Lucia there, recreating a scene from the 30’s.

Many arrive at Carenas only in summer time and, although they do not know the history, it is still possible to distinguish how it is divided in street blocks. Its boundaries are alleys that once had names, like Cuba and Bullón, for example.

There are also reports of endemic plants such as coccothrinax cupularis palm, now included in the most recent edition of the Red List of Flora from Cuba as a species in critical danger of extinction. But neither natural beauty nor history will save Cayo Carenas from oblivion.

Life has become difficult for those who decided to stay. The doctor or the family nurse no longer comes. There is electricity only at night and there are lots problems with drinking water, so much that some have become accustomed to drink rainwater only.

From glory to desolation. Carenas is lit only once a year: every July 16 when the Maritime Procession of the Patron of the Fishermen is carried out. The pilgrimage leaves the Church and takes a boat trip around Carenas.