Only 24 experts, around 10 percent of those who could have attended, will be able to travel from the island. 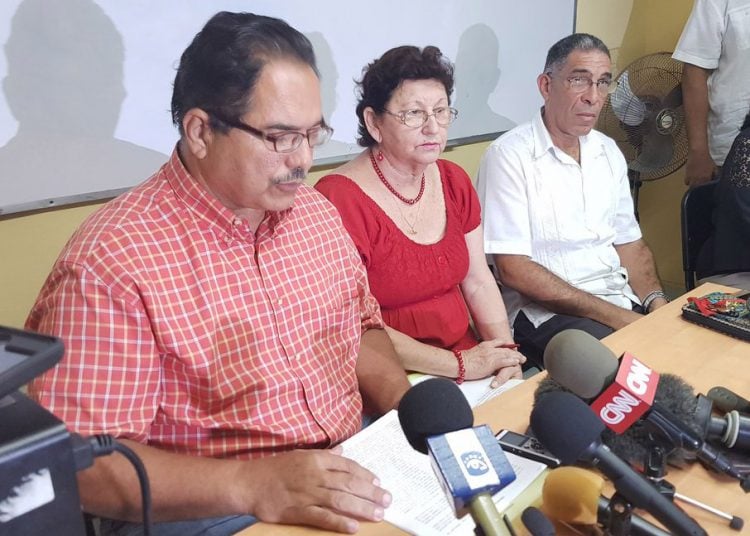 Representatives of the Cuban Ministry of Higher Education denounced at a press conference that the U.S. denied visas or made it impossible for some 200 Cuban academics to attend a congress of the Latin American Studies Association (LASA) in Boston. Photo: @HatzelVelaWPLG / Twitter.

Representatives of the Cuban Ministry of Higher Education (MES) denounced this Thursday that the United States denied visas or made it impossible for more than 200 academics and experts to attend the annual congress of the Latin American Studies Association (LASA).

“A wide range of academics from all fields will not be able to participate,” regretted at a press conference Rafael Cervantes, an MES official and coordinator of the Cuban participation in the event, which begins this Friday in Boston under the title “Our America: Justice and Inclusion.”

The participation in the congress of 541 Cubans, both residents on the island and abroad, was initially previewed. But most were denied their visa application, and there were many others who couldn’t even afford the process, since after the reduction of consular services in the U.S. embassy in Havana it is necessary make the applications in a third country.

Washington minimized its personnel and services in Cuba after more than a score of U.S. diplomats suffered health “incidents” in Havana whose origin has not been clarified and in which the Cuban government denies any responsibility.

According to Cervantes, only 24 experts will be able to travel from the Island, around 10 percent of those who would have initially attended an event in which “many academic links have flourished” in recent years.

He explained that given the impossibility to travel of a great deal of the Cuban delegation, there are panels that can’t be held or their speakers will be very depleted, such as those dedicated to Cuban hero José Martí and others focused on the Cuban economy and the situation of the island’s young people.

Since 2016, the Cuban delegation’s participation in this forum has been growing, from the 200 that attended the congress that year to the more than 500 that would have been at the meeting in Boston.

The official also denounced the “hostile treatment” received by Cuban academics in the U.S. embassies in several countries, where during the interviews they were asked if they belonged to the Communist Party of Cuba (PCC).

“The island’s immigration authorities don’t ask U.S. citizens if they belong to the Democratic or Republican parties when they arrive in Cuba,” snapped Cervantes, who spoke of “pure and hard McCarthyism.”

He also pointed out that in view of what happened, the next annual LASA congresses will avoid having the U.S. as their venue, and will be held consecutively in Mexico, Canada, Colombia and Portugal.

Cuba and the United States announced the resumption of diplomatic relations in December 2014, after more than half a century of enmity, but the arrival of Donald Trump to the White House in early 2017 thwarted the “thaw” and returned bilateral relations to historical minimums.