In times when basic foods are lacking, accessing information in real time about where they can be purchased is a great advantage. 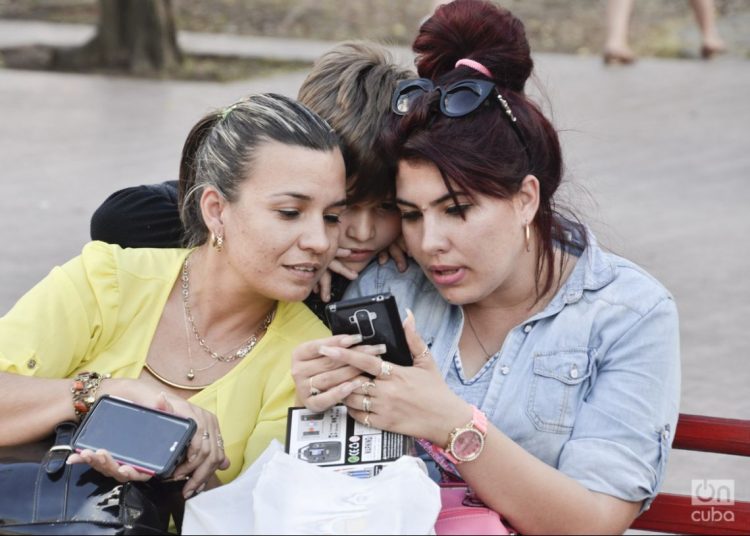 If during the Special Period of the 1990s a neighbor could let you know at your door or with a cry that there was chicken at the butcher’s, today the technologies and the Internet, at an unfair price, move and expand the neighborhood to the cell phone in a new way: the WhatsApp groups.

“¿Dónde hay?” (Where is there?) is one of those groups, created first among friends, and which now includes hundreds of people.

“The group emerged because I already belonged to others related to several subjects and I saw that they were so useful and so active that I had the idea of taking advantage of what we had at hand to help with the crisis we have right now,” says Dalma Martínez, one of the administrators, referring to the shortage of food that the government is trying to palliate with rationing measures.

Martínez explains that the main objective, “just as the name says, is to locate food products in Havana, since the products are sold in different stores and schedules and we help each other and we can go directly to look for what we need.” 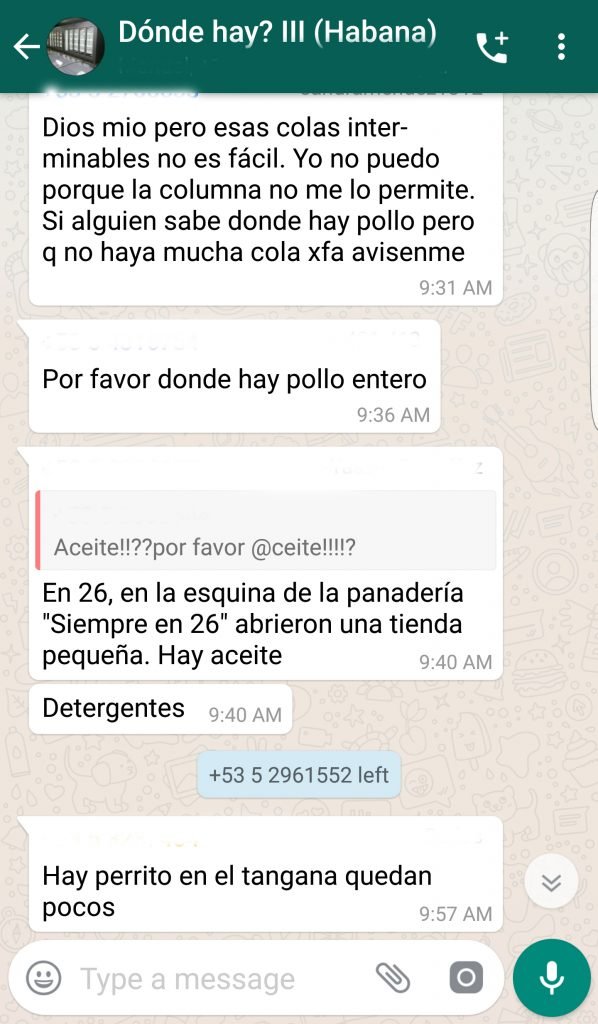 In times when basic foods are scarce and deficiencies in transportation are a problem, accessing information in real time about where a specific product can be found is almost essential to save time, money, energy and, of course, obtain what is needed, be it food, construction materials, detergent, and others, the creators of “¿Dónde hay?” explain.

“Now I can go directly to where I know the product is; before I had to visit 20 different stores to look for something and most of the time I couldn’t find it. Now it’s much easier,” says Martínez.

The group first emerged among friends or acquaintances, but it was expanded to include anyone who wants to collaborate or needs information.

“At the beginning it was called ‘¿Dónde hay comida?’ (Where can I find food?), but when we started opening the other groups, we left it as ‘¿Dónde hay?’ because people needed to know about more products,” said Rosana Vargas, another of the administrators on WhatsApp. 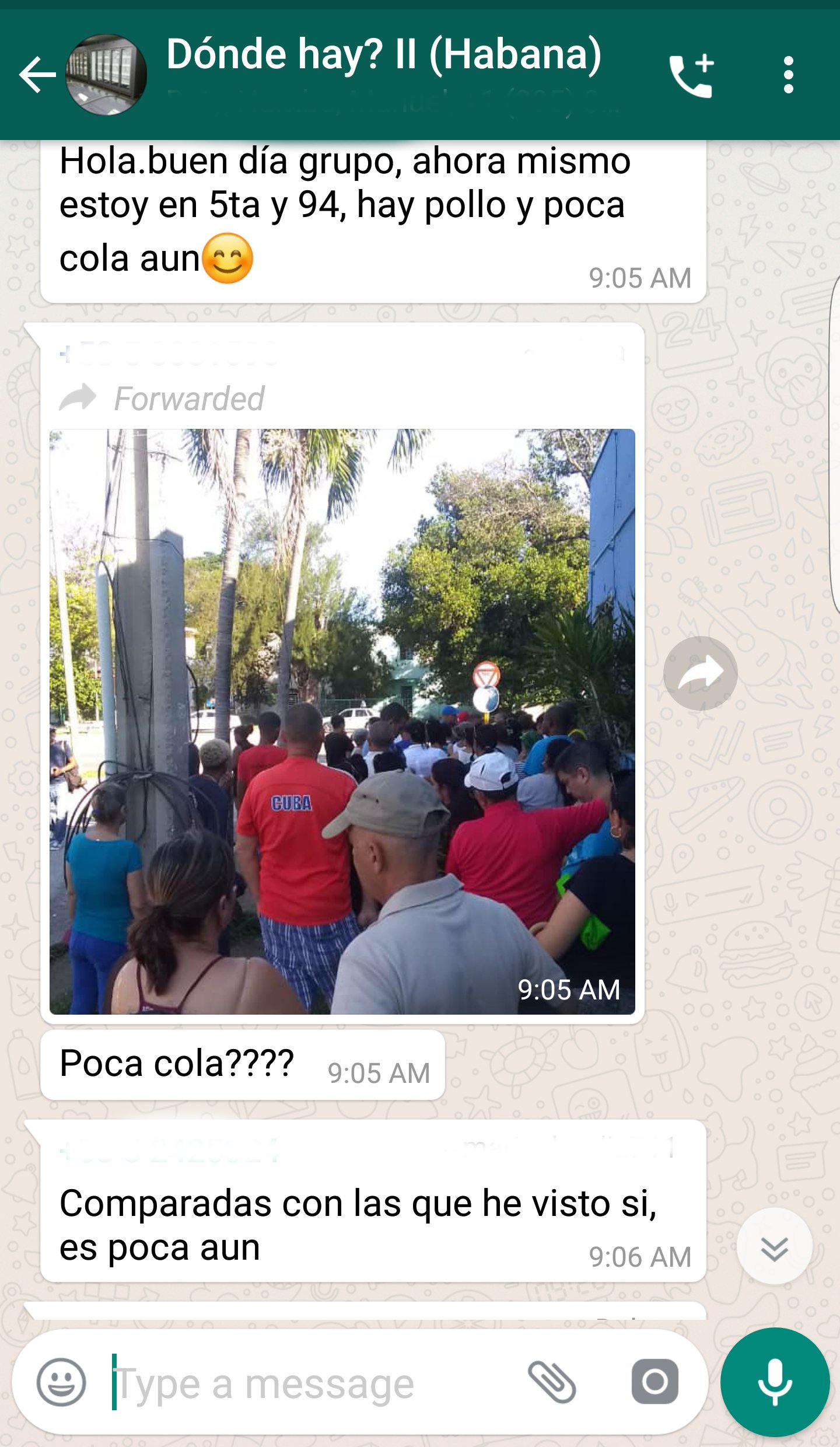 Since the maximum number of people allowed in a WhatsApp group is 256, the group administrators have had to create up to three in a few days, with the same name but with numbers that identify them.

They work in a basic way and respond to a dynamic that is “not written” but that everyone seems to know: no politics, no advertising or spam not related to the needs of the group, no jokes or chain messages, and so on.

Martínez explains that “necessity has made people focus very much on the group’s objective, but there was always someone who joined and strayed from the subject, especially at the beginning, and started discussing the causes and consequences of the situation we are experiencing, but in the end it was clarified that the group was not for that and the majority stuck to the objective.”

If someone transgresses these “community norms,” they are excluded from the group, their organizers explained. 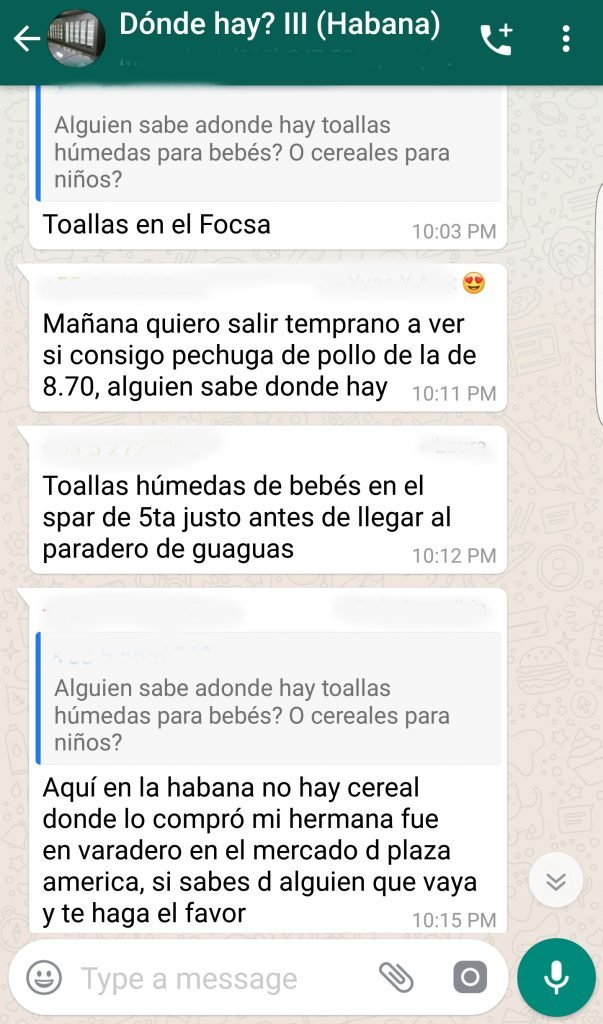 Vargas says that the use of this method on WhatsApp in her case ranges from meeting groups for owners of Labrador dogs, promotion of artists’ projects, as well as other groups of friends and family members as is normal on this platform of growing popularity in Cuba.

After having created these groups dedicated only to finding products in Havana, Vargas learned of others that exist with the same objective, with names like “Basic.”

Martínez explained that since she works with this technology, she highly values ​​the utility of interconnection through cell phones.

“The arrival of the Internet to cell phones in Cuba, although late, can help us a lot in thousands of things. In these times of such a great crisis on the island, there is no doubt it is a priority for the majority to make the most of the benefits of the Internet and to be connected,” she added.

Regarding the cost-benefit of using WhatsApp instead of messages or traditional calls by cell phone, the balance completely tilts in favor of the first option.

Gabriela M. Fernandez, a journalist specializing in science and technology, compared earlier this year what it meant to make a call on WhatsApp with making a call through the ETECSA telephone service.

“If you were to make a traditional call to Spain it would cost 1.20 CUC per minute. That is, you speak for 10 minutes and consume 12 CUC. However, with 10 CUC of your main balance you buy 1GB of data to communicate a whole month with calls, video calls and chat with your family and friends.”

ETECSA rates show the recent change in the cost for one megabyte, since previously it represented 1 CUC and now it is 0.10 CUC to surf the Internet.

Connecting to WhatsApp and sending messages or calling through the application would represent a considerable saving compared to the use of SMS messaging or “normal” calling. Not to mention reaching many more people at the same time. 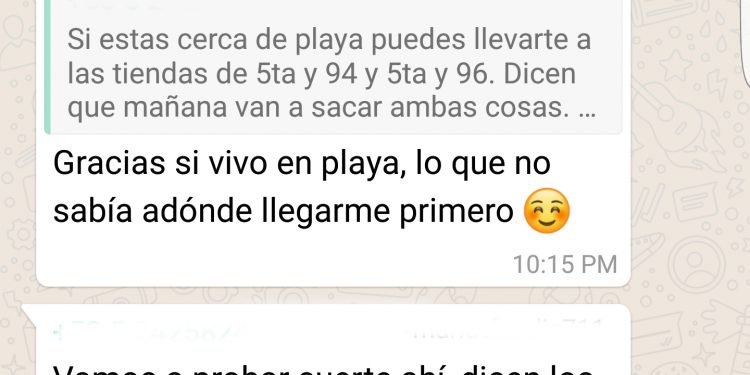 While not all Cubans have access to the Internet and can’t afford the mobile connection, Martínez insists that the reach goes far beyond the members of the group itself.

“A person can tell several more and thus the information is distributed faster. Cubans are the same as always, looking for solutions and alternatives and helping each other,” said Martínez.

“Our parents looked for alternatives in the same way during the previous Special Period, although it was more difficult because there were no products in the stores, that is, they had to make do with what they had,” said Martínez, adding: “We are here and everything we can do to help a little with the situation will be appreciated.”

For her part, Vargas concluded: “If these groups help people, we will continue to support them, even if we have to open 100 more.”