At least three detainees tried to commit suicide, 19 have threatened to do so and dozens have participated in sit-down protests. 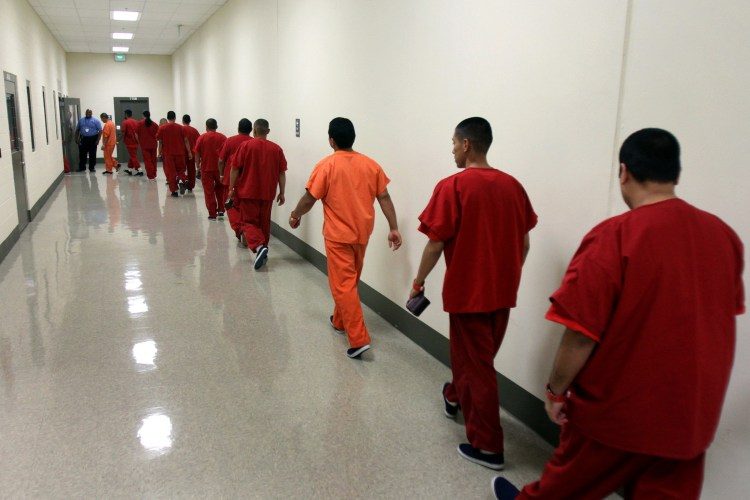 The revolt of Cubans confined in immigration prisons in the United States is dragging on. At least three detainees have tried to commit suicide to protest a long confinement awaiting a hearing before an immigration judge to hear their requests for political asylum.

In addition, 19 other Cubans have threatened to do the same, immigration lawyers said. The protests also expanded to physical demonstrations such as sit-downs in prison facilities, all this in an Immigration and Customs Enforcement (ICE) prison in Chaparral, in Otero County, New Mexico, lawyers and immigration activists in the area reported.

The suicide attempts occurred last week but were only reported this Friday. According to the Albuquerque Journal, at least two of the Cubans tried to commit suicide by cutting their wrists with plastic ID cards. In an unusual gesture, ICE confirmed the incidents in a statement and revealed that everyone involved received immediate medical care.

“The fact that I have made this dramatic decision to cut my wrists must be worrisome. I am not like this. I just need to get out of this prison and see myself in a situation where I can be treated with more humanity,” said Iosnaiqui Acosta, 32, in a statement distributed to the press by his lawyer, Linda Corchado.

According to the also director of legal services of the Las Americas Immigrant Advocacy Center,  Acosta told her on Wednesday that he made the decision to cut his wrists when the prison authorities transferred him to an isolation cell known as “the hole.” “At that time (Acosta) took out his ID card and began to cut his wrists. The jailers immediately took him to the medical post because the amount of blood was huge,” said the lawyer.

Acosta, the only one of the three Cubans who tried to commit suicide and has been identified, appeared in July at a border post in El Paso, Texas, and requested political asylum. At that time, he was returned to Mexico waiting for the hearing. But two months later he managed to enter the United States clandestinely through Ciudad Juárez and appeared before the Border Patrol, and thus ended up being sent to the ICE detention center in New Mexico.

Acosta now has a hearing scheduled for December where a judge will decide if his political asylum application is accepted. The possibilities are minimal, according to his lawyer, because Cubans who are detained in the Otero County prison register “a high level of asylum denials” by judges who “believe that even if they are politically persecuted they will not have problems if they are sent to Cuba,” which “is an absolute denial of the known conditions prevailing in Cuba.”

Thus, the Immigrant Advocacy Center delivered a letter to the Albuquerque Journal where a group of Cubans are attempting to sensitize the authorities to their reality. “We have been detained from 6 to 9 months, so we ask for our release. We will never be a public burden or represent a risk to the community. Most of us are professionals with a high educational level and we want to serve the community with our knowledge and contribute to the country,” says the letter.

The Otero County Detention Center is managed by MTC, a private institution that provides services to ICE.

At the beginning of the month a Cuban from Pinar del Río, Roylán Hernández Díaz, 43, committed suicide in a Louisiana prison where 500 other Cubans are waiting for immigration hearings or to be deported to their country of origin. Hernández Díaz’s case is rare, because the man and his wife crossed the border five months ago through El Paso, Texas, and were arrested by immigration. However, the woman was released and the husband sent to jail in Louisiana.

In that same prison in Pine Prairie, in September another Cuban, Osleivy Carnaval, 26, sewed his mouth after a judge denied his request for political asylum on the grounds that the young man did not have a “credible” reason to fear he would suffer reprisals if he returned to Cuba. The authorities discovered him when they went to look for him in the cell to put him on a plane, they informed the family and, since then, they have lifted an informational blockade around him. According to immigration lawyers, Carnaval was recently moved to Miami, and would have been deported to the island this Friday.