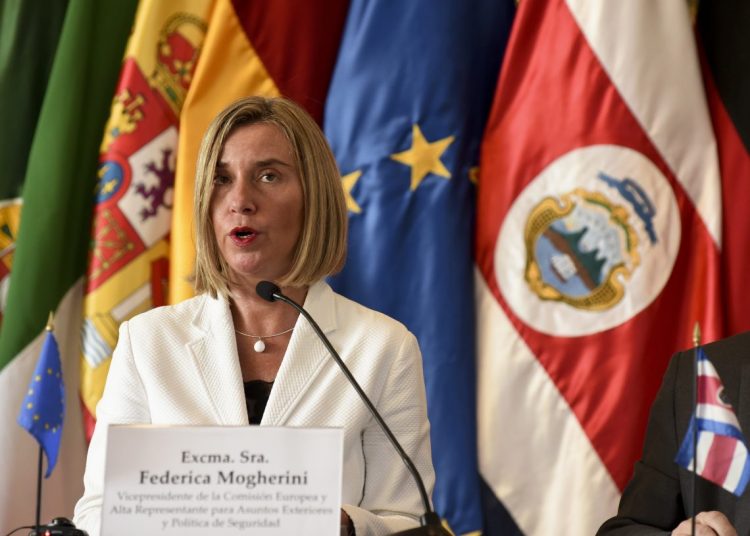 The High Representative of the European Union for Foreign Affairs and Security Policy, Federica Mogherini, has warned the United States of the impact of the lawsuits due to the Helms-Burton. Photo: AP

This week the European Commission reaffirmed its old position that U.S. companies that question in the courts member countries’ economic relations with Cuba, will run the risk of their European assets being confiscated.

All this resurfaces after Washington decided in April, within the framework of the Helms-Burton Act, to allow the filing of lawsuits by U.S. citizens against foreign companies that use facilities or properties nationalized at the beginning of the Cuban Revolution.

In a letter addressed to the U.S. Chamber of Commerce, cited by the Bloomberg agency, the Commission recalls that European laws don’t recognize extraterritoriality and in response authorize the opening of other lawsuits in the country of origin of the affected company, where compensation is contemplated for the same value set by the U.S. courts.

“The likelihood is that the beginning of a judicial case in the United States will trigger a case in which those companies can obtain compensation in U.S. courts, but will see just the same amount confiscated from their European operations,” says the letter sent by the European Commission to the vice president of the U.S. Chamber of Commerce, John G. Murphy.

The letter recalls that European legislation “allows companies sued in the United States to recover all damages through legal proceedings against U.S. plaintiffs” and “those damages can be recovered through the confiscation of European property from U.S. plaintiffs, persons who represent them or intermediaries, including the shares they may have in European companies.”

As of this Friday, only four lawsuits under the Helms-Burton Act have been filed in U.S. courts, three in Miami and one in Washington. Those in Florida concern only the port facilities that were owned by two U.S. companies in Cuba that no longer exist and the lawsuits were filed by the heirs of the families that owned the property. The third is, until now, against a Cuban conglomerate for the exploitation of a hotel in Camagüey. In the future the Spanish Meliá hotel chain could be included.

But the fourth has been presented by the Exxon Mobil oil giant, whose refineries and gas stations were nationalized in 1960. And Exxon Mobil has a vast operation to extract oil and natural gas that covers several European countries ―Germany, Italy, Holland, Norway, the United Kingdom and Romania― which represents 14% of the entity’s global operations. If the lawsuit is won, Exxon Mobil is a conglomerate with the largest number of properties in Europe.

The European warning to the U.S. Chamber of Commerce is not new. In fact, it was one of the compelling reasons that led Europeans to convince the White House to suspend the application of Title III of the Helms-Burton Act for more than 20 years, following the promulgation of the law by President Bill Clinton in 1996.

“The Europeans were always very clear about their displeasure with the law. They see it as an intervention in their sovereignty because of its extraterritorial nature. They have a European law that protects their investments in other countries, as all the main countries of the Union have their laws that protect their businesspeople,” attorney Robert Muse, an expert in legal aspects of transatlantic trade, told OnCuba.

Following the repeal of the ban on the nationalization lawsuits, several Cuban-American lawyers have referred to lawsuits against several companies, such as the Spanish Meliá, but nothing has yet been filed in U.S. courts.

Meliá, which has two hotel facilities in the United States, is considered a pioneer in foreign investment in Cuba. The lawsuit by the heirs of the owners of the San Carlos Hotel, in Cienfuegos, which is managed by Meliá, for the time being has left the Spanish company outside. “We still haven’t filed a lawsuit against them. We have given them 30 days to respond to our aspirations,” attorney Andrés Rivero explained to OnCuba.