Bruno Rodríguez said on his Twitter account that U.S. officials “hide real events and manipulate private donations” and affirmed that “the blockade was designed to cause harm to human beings.” 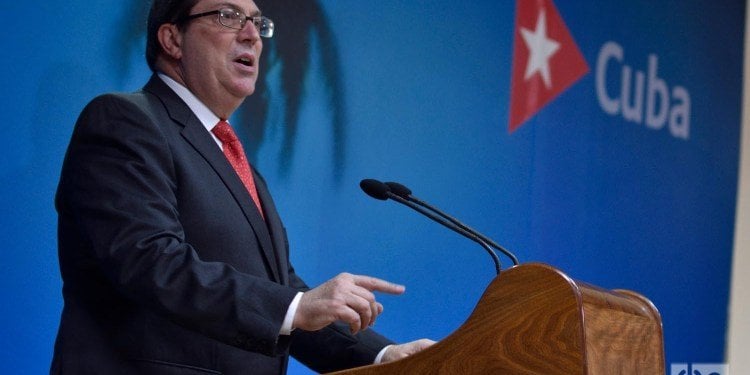 Cuban Foreign Minister Bruno Rodríguez affirmed this Friday that the U.S. government “lies by insisting on non-existent medical exports due to the blockade.”

Rodríguez said in his Twitter account that U.S. officials “hide real events and manipulate private donations” and affirmed that “the blockade was designed to cause harm to human beings.”

The island’s foreign minister’s statements come a day after the Treasury Department said in a statement that the United States “is committed to ensuring that humanitarian assistance continues to reach at-risk populations through legitimate and transparent channels as countries across the globe fight the Coronavirus Disease 2019 (COVID-19).”

The statement, which the Agencia Cubana de Noticias (ACN) news agency describes as “misleading,” affirms that the sanctions programs administered by “the  Office of Foreign Assets Control (OFAC) generally allow for legitimate humanitarian-related trade, assistance, or activity under existing laws and regulations.”

According to the note, OFAC encourages those interested in providing this assistance during the pandemic to avail themselves of longstanding exemptions, exceptions and authorizations pertaining to humanitarian assistance and trade, available in many of the sanctions programs.

On the Cuban issue in particular, the statement states that “Though the Cuba embargo remains in place, and most transactions between the United States, or persons subject to U.S. jurisdiction, and Cuba continue to be prohibited, OFAC maintains several general license authorizations designed to allow for humanitarian relief and assistance to the Cuban people.”

However, in the opinion of academic Arturo López-Levy, “the document does not offer great hope. They say they cannot change the policy, but are willing to apply it flexibly. It responds to [international] pressure at a time when sanctions are questioned during this pandemic.”

“Although it may seem like a relaxation, it really isn’t,” López-Levy explained to OnCuba, “among other reasons because this does not change the essence of the embargo beyond secondary sanctions, which are those that apply to third countries whose companies need to register in the United States to be able to negotiate with the island, both because of the currency used and the means of transportation. As is known, ships or planes that travel to Cuba without permission are prevented from entering the United States for the following six months.”

In line with the above, Cuban authorities and official media have reported these days that a donation of medical supplies sent from China by the Alibaba company could not reach Cuba because the U.S. company that would transport it to the island declined to do so because of the embargo regulations.

They have also reported on other difficulties suffered by Cuba to acquire medicines, equipment and medical supplies with U.S. companies, or subsidiaries of these in other countries, as a result of Washington’s sanctions against the island.

In the last year, these sanctions resulted in losses of about 160 million dollars for the Cuban health sector, and forced purchases to be made in places far from the island with more expensive freight rates, according to the ACN.