On June 16, 2017, in a presidential memo signed in Miami, Trump had established that the "self-directed individual trips allowed by the Obama administration" would come to an end. 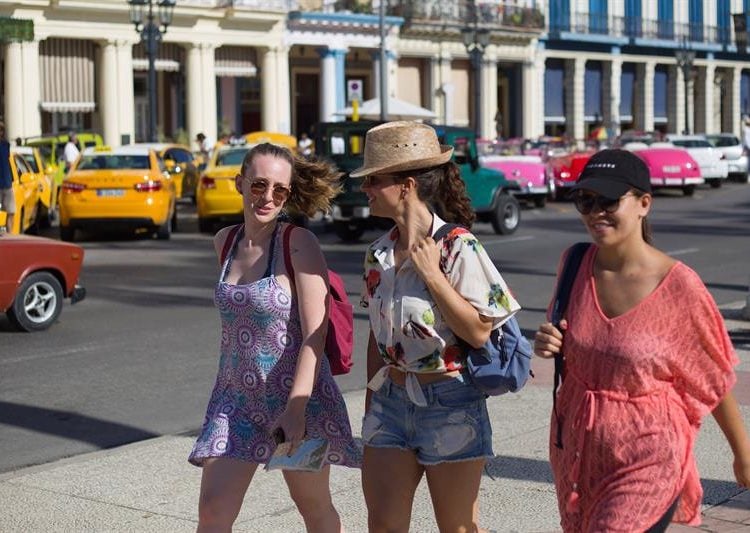 Tourists walking this Wednesday through one of the streets of Havana. Photo: Yander Zamora / EFE.

In its process of interaction and engagement with Cuba, the Obama administration gradually modified the Cuban Assets Control Regulations (CACR) based on its own objectives: “get involved with and empower the Cuban people” and “increase contacts to support Cuban civil society” were two of its key expressions.

This was done several times since 2009. The last one was on March 15, 2016, shortly before President Obama’s visit to the Island. The Office of Foreign Assets Control (OFAC) and the Department of Commerce Bureau of Industry and Security (BIS) announced several “significant amendments” to the CACR, one of which would allow “non-tourist personal travel,” a move designed to clear the way for commercial flights, which had already been announced in January.

Going to the Island would be simpler starting then: it would no longer be necessary to do it in groups or packages, but through the individual basis―the self-directed―, a variant that some called the face-to-face. You just had to fill out a form declaring the educational purpose to travel to Cuba. In fact, with regular direct flights, a ticket to Cuba could be booked online, just like traveling to Buenos Aires, Paris, Moscow or Burundi. In February 2016, both governments signed a memorandum of understanding to reestablish the flights as outlined in the third round of talks in Washington DC (December 14-16, 2015).

In principle, 110 daily flights of U.S. airlines to Cuba were established, connected with the international airports of Havana, Camagüey, Cayo Coco, Cayo Largo, Cienfuegos, Holguín and Manzanillo, among others. An additional measure of the outgoing executive to try to cement his policy before concluding his second and last term by involving this sector of the economy, undoubtedly one of the most dynamic and with good lobbying capacity.

Not long after the announcement of the first policy changes, in 2009 several companies had tried to reconnect with the island by sea, the one from the beginning of time, the one that had connected Boston with the port of Havana before and after the independence of the Thirteen Colonies.

The “blue and white foam path” had been interrupted in the early 1960s with a few exceptions. One, the Daphne, “the jazz cruise ship” that in 1977 brought maestro Dizzy Gillespie to Havana from New Orleans. Another, vessels with food purchased in cash after 2000, plus one with students from the University of Pittsburgh.

But the official refusal was then categorical: “The licenses granted by OFAC for people-to-people exchanges do not authorize trips to and from Cuba on board a vessel, including cruises,” a State Department official told reporters. A refusal that the liberal press did not approve when reasoning as follows: if the objective was to have/maintain lines of direct communication with Cuban civil society, not authorizing trips by sea was at least not very consistent. They were obviously asking for a change.

That change finally came on May 2, 2016 with the arrival to Havana of the Adonia cruise ship, of the Fathom company, a subsidiary of the very powerful Carnival, from the port of Miami with some 700 people on board, almost 20 of them Cuban-Americans. (“Make history, go on a cruise trip to Cuba, be one of the first Americans to sail to Cuba in more than 50 years” was the appeal.) But not without previous tensions, the main one determined by a regulation that prohibited the entry of Cubans to the island by sea. Initially, the company began selling tickets to only Americans, but two Cuban-Americans established a course of action to challenge the move in a federal court based on discrimination laws.

The executives of the firm announced that the ship would postpone its departure in the absence of a change, evidently waiting for a definition by the Cuban government. “It is a restriction that Cubans can’t arrive or leave by boat, but by plane. This is a general concern of the cruise industry,” Fathom spokesman Roger Frizzell told BBC News.

One month after the contracts were signed, on April 22, 2016, an official note from the government of Raúl Castro put an end to the problem by authorizing, among other things, “the entry and exit of Cuban citizens, regardless of their immigration status, as passengers…on cruise ships.” It also stated: “the terrorist actions against Cuba…gave rise to the regulation that established that Cuban citizens residing abroad must enter our country by air, adopted by the need to prevent the use of vessels to carry out these acts, of which Cuba has been a victim on numerous occasions since the triumph of the Revolution in 1959.”

The result of all that movement was immediate. The number of American travelers were increasing significantly. Excluding Cuban-Americans―free as the wind because of those same Obama policies―, 284,937 Americans went to Cuba in 2016, that is, the equivalent of 7% of the visitors who arrived that year: 4.1 million.

Between January and May 2017, 284,565 Americans traveled to the Island, which practically equaled the number of those who had arrived during the previous year. As is known, this is a type of tourist with economic peculiarities that differentiate them from others and eager to touch with their own hands the forbidden island. They are also fans of Havana Club rum, of the mojitos of La Bodeguita del Medio, of Cohiba cigars and of certain stories about Cuba and its culture set up in the popular imagination for a long time.

But the Trump administration would move based on another frame of mind. After a waiting period, on June 16, 2017, finally the long-awaited changes would be announced in a presidential memo signed in Miami (NSPM) in the presence of the historical exile. Its first objective was to identify entities under the control of the Cuban military, or acting in their favor, to cut off the flow of money from tourism. The second, the announcement that the individual variant part of the trips to Cuba would come to an end. According to the document, the new policy increased travel restrictions to better enforce the legal ban on tourism from the United States to Cuba. Among other changes, travel for non-academic educational purposes would be limited to group travel. Individual self-directed travel allowed by the Obama administration would be banned. Cuban-Americans could continue to visit their family in Cuba and send remittances.

Then, on October 20, 2017 the measure was published in the Federal Register:

(ii) The regulations shall further require that those traveling for the permissible purposes of nonacademic education or to provide support for the Cuban people:

(A) engage in a full-time schedule of activities that enhance contact with the Cuban people, support civil society in Cuba, or promote the Cuban people’s independence from Cuban authorities; and

(B) meaningfully interact with individuals in Cuba.