Cuban-American photographer Hugo Fernández captured in a panoramic way the interior of the U.S. writer’s home on the island. 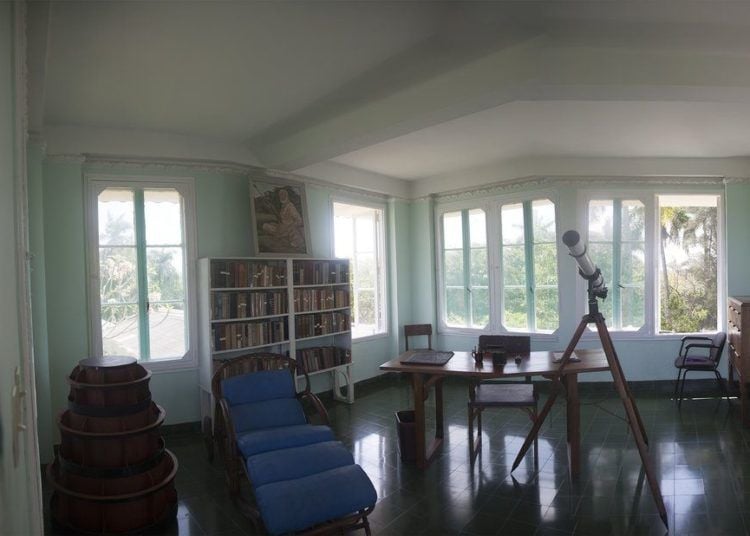 When Cuban-American photographer Hugo Fernández visited Hemingway’s house in Cuba for the first time in 2016, he felt frustrated that he couldn’t go inside the rooms. It was impossible to enter them because each door was cordoned off and it was only possible to observe the Finca Vigía surrounding it, without entering. It was then that he decided to photograph the spaces and build a single photo from multiple images, a way to better capture the details that no one could have access to.

He took more than eight photographs in each space, mentally dividing them in different quadrants. Then, on his return to the United States, he used the Photoshop merging technique to create unique panoramic images based on several shots of the most emblematic places of the U.S. writer’s home.

“I’ve always been captivated by Hemingway’s history. When I go to Europe, in Venice or Paris, for example, I go to the places he used to frequent, such as Harris Bar or Shakespeare and Company. So I couldn’t stop myself from visiting his house in Cuba,” said Fernández.

“However, when I discovered that people can’t enter his house in Cuba (to preserve the museum and the objects in the rooms), but only observe from the doors and windows, I thought it was important to capture those spaces as best as possible. so that others could see them better,” he explained.

Fernandez, who is also a professor at the City University of New York, drove from New York to Florida to transport his photos, some almost 3 meters long (about 9 feet).

When he arrived in Miami in mid-February, he exhibited his collection in the Glenn Hubert Library of the Florida International University, together with the Cuban Research Institute.

The photos were later donated to the university.

One of them shows the interior of a room supposedly prepared for the writer to work in it, but he never really used it. It is the room with the telescope, which was only inhabited by Hemingway’s numerous cats, Fernández discovered during his investigations.

In Cuba there is no trace of the descendants of those cats, but Fernández explains that the writer’s house in Key West still has in its surroundings the successors of Hemingway’s favorite pets, “famous cats because many have six fingers on the front paws, due to a genetic mutation.”

“I do not have plans to photograph that house, because the personal objects are in showcases and the things have been conserved as an exhibition, unlike Finca Vigía, where time froze and it seems that Hemingway is going to enter at any moment,” said Fernandez.

During his research process and the forming of the exhibition about Hemingway’s house, Fernández contacted the Villareal family, where the father, René, is considered “Hemingway’s Cuban son.”

René, the son of Raúl Villareal, who was Hemingway’s closest assistant, shared a book about his father’s memories with the winner of the Nobel Prize for Literature.

“The book and the conversations with Raúl helped me to better understand the spaces and the history behind them,” said Fernández.

The giant photos are mounted on canvas, as if they were paintings and, if you look closely, you can notice the places where the different images interpose to form one.

“Although the photos are large, the titles of the books still can’t be seen, for example, since there are details that are very difficult to capture from so far away,” said Fernández.

The exhibition was organized according to the order of what is found in Vigía, in this case a baseball field, where children play from time to time.

Then you pass through several of the main house’s rooms, the swimming pool and the place where the yacht Pilar is located.

“Someday I would like to return and take other photos, not as a photographer-tourist, but with the intention of making a book of photographs, with more details,” said Fernández.

His next project is to materialize an idea that has been going around in his head for a long time: to capture in 360 degrees and with 3D technology the different rooms of Hemingway’s house.

“This would help researchers, teachers and anyone interested, who could visit the place virtually and access more information from that part of Hemingway’s life and, at the same time, the museum could use it for educational purposes,” he concluded.