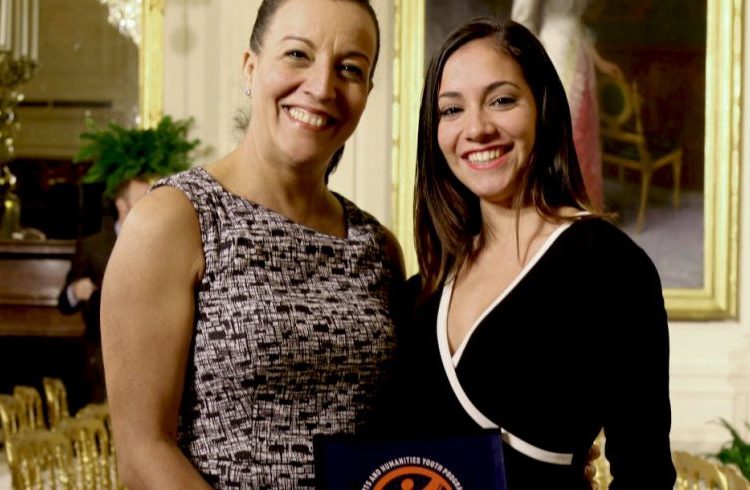 Lizt Alfonso, to the left, with student Eliannys Pérez when receiving the International Spotlight Award in the White House. Photo: María Peña / Impremedia.

U.S. First Lady Michelle Obama this Tuesday in the White House gave the Lizt Alfonso Dance Cuba School (LADCS) the International Spotlight Award granted by the U.S. President’s Committee on the Arts and the Humanities (PCAH), of which a delegation visited Cuba last April as part of a cultural mission for “greater opportunities to carry out artistic collaborations” with the island.

Lizt Alfonso, founder and director of the company, was handed this recognition by Cuban ambassador to the United States José Ramón Cabañas and Michelle Obama for the “very dynamic field of programs that develop the freedom of young people and enrich their lives in all of Cuba. With 25 years of work they have provided first-class dance education to thousands of students in Havana,” said a PCAH spokesperson during the awards ceremony.

“What would we be without all of you who carry us in your hearts, our self-sacrificing people who love their children. Now, they, this people, also love us and greatly respect us. It’s time to open doors and build bridges. Only love sows wonders,” the moved Cuban dancer and choreographer said in statements to Prensa Latina news agency.

Alfonso also commented for the daily Hoy of Los Angeles that she attributed the prize not only to the thawing of relations between the United States and Cuba which began in 2014, but also to “the continuous presence of our professional company on U.S. stages since 2001.”

“We entered the United States for the first time during the George Bush period and we never really had difficulties to perform there, except the economic ones that we all know of. We especially want to perform and for that there are no difficulties,” she said in a recent interview published in OnCuba.

Lizt Alfonso Dance Cuba is performing these days with the show Cuba Vibra in cities like Chicago, Detroit, Atlanta, Lewistown, Sheboygan, Statesville and San Luis: “My dream was to have a dance company and get to Broadway. Everything that happened later has more than surpassed the initial wish. That’s what’s beautiful. That’s why we always set new goals for ourselves – increasingly higher and more ambitious – from the artistic and production point of view, on a personal as well as collective level,” she said then.

The International Spotlight Award for Lizt Alfonso forms part of the 2016 National Arts and Humanities Youth Program Awards (NAHYP) granted for the first time by the Obama administration. This year the President’s Committee, out of 251 nominated organizations, awarded 12 extracurricular arts and humanities programs for contributing to the formation of youths residing in vulnerable communities of the United States.

During the awards ceremony Michelle said that through these programs students have become poets and dancers, filmmakers and photographers, but that even more important, they have become leaders in their schools and communities, and she also mentioned that during the last eight years, out of 3,000 candidates the Committee has awarded 100 programs from 33 cities and nine countries.