Haidee Cano explores her Afro-Cuban roots, while continuing an internal dialogue about her identity as an American and Cuban. 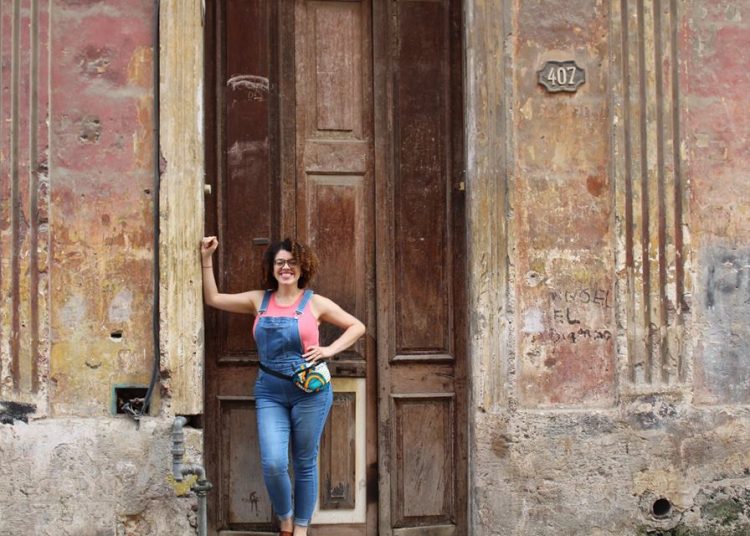 Haidee Cano in Havana. Photo: Courtesy of the interviewee.

Haidee Cano was born in a place where “violet water” (a cologne that smells of violets) is put on babies since they’re born and are taught to eat guava pastries or drink milk with coffee at breakfast as “part of their Cubanness”; but since she was a child she had the uncomfortable feeling of “not being from here or there,” of living trapped in a Cuban-American screenplay.

The place where she was born, although it isn’t in Cuba, is a “Cuban” city: Hialeah, in Florida, a space where the stereotypes of a culture are taken to their maximum expression due to the emigrants’ nostalgia of the past and the present, and where being black or mulatto is like having emigrated twice: a minority within the Cuban community in the United States.

At 27, Haidee has just graduated with a Master’s in Social Work at the Atlantic University of Florida, where she was named student of the year in her branch for Palm Beach County. This year she also presented a national research on undocumented Latinas who survived gender-based violence.

Her field of study is mental health and she works with marginalized and low-income communities, immigrants and refugees, and prisoners, most of them coming from black families that carry the weight of centuries of oppression and racism.

Haidee is interested in investigating how the arts can promote the process of healing emotional and psychological traumas or wounds and, although she now lives in West Palm Beach and will soon move to Boston, some time ago she began her own process of exploring her identity and her roots through trips to Cuba.

What does it mean to you to be Cuban?

I never realized what a unique experience I had growing up in Hialeah until I moved to college in Gainesville, at the University of Florida. It was so amusing to me to have people be bewildered at how all the signs in my hometown were in Spanish, how I had mandatory Spanish classes in elementary, how most of my teachers were Cuban, along with most of my classmates.

In Hialeah, I was inundated by Cuban store owners, Cuban neighbors, Cuban restaurant, Cuban everything, 24/7. Essentially Cuba “sin la miseria” (without poverty), as my mother would say.

For Hispanic Heritage Month in Kindergarten, my entire class sang “Yerberito Moderno” and I dressed up like a rumbera.

We were that Cuban. My first language was Spanish. I was in English Second Language (ESL) program until 2nd grade, more so because my mother didn’t want me to lost my Spanish, as if that could ever happen in Hialeah.

In Hialeah, it’s a very common occurrence to witness your vecino (neighbor) sacrificing a goat in their yard. It is also usual to see same viejitos (old men) playing domino outside Sedanos. Someone once told me that Hialeah was “el solar mas grande fuera de Cuba (the largest tenement house in Cuba).”

Being Cuban to me is having your heart skip a beat every time you hear a salsita playing on the radio; it’s calling other people “mama” and “papo”; having cariño (being affectionate); craving pastelitos de guayaba con un cafe con leche (guava pastries with milk and coffee) in the mornings; it’s saying hi to others with a kiss on the cheek; it’s keeping your home “Cuban clean” aka absolutely spotless; it’s being hospitable; it’s being bold y “sin pena” (not shy); it’s having grit and resolviendo (resolving); it’s honoring the European, African and Indigenous heritage that make up our gorgeous island.

I would also say that as I get older what it means to be Cuban changes the more I find out about Cuban history, meet more of my relatives, and grow more secure in my own identity.

In a recent article you mention that you are “not from here or there,” why?

Ser ni de aqui ni de alla (Not from here or there) is the struggle of being an immigrant’s child, I think. You are raised in this country that is so different from that of your parents. Yet you speak differently at home than you do with your friends; you eat other foods; you’re in between cultures all the time it feels like. It’s feeling like you’re not totally Cubana pero tampoco totalmente Americana.

Haidee with her family in Cuba. Photo: Courtesy of the interviewee.

I think I always feel Cuban AND American. Sometimes they’re in conflict with one another, sometimes they are peacefully coexisting. I can’t deny either identity. Depending on the space, I may feel one over the other.

For example, if I am dancing salsa (which I love!) in a very predominantly white American space and no one knows how to dance salsa, I feel SUPER Cuban. However, if I am dancing casino en la Habana, I may feel less Cuban. It’s all insecurities, I think.

But honestly, being Cuban-American is so unique to each person…who am I to say that not dancing salsa makes someone less Cuban? My own father can’t dance salsa to save his life!

Speaking Spanish can cause a lot of anxiety for first- or second-generation Latinx immigrants and Cuban-Americans. I speak, write and read Spanish fairly fluent but I remember when I visited Cuba for the first time, my cousins laughed at my “accent”. They told me they could tell that I wasn’t from Cuba and that made me feel kind of sad. Like, what?! This was my first language. I only speak Spanish with my parents. I grew up reciting “Los zapaticos de rosa”….

In the U.S., I have gotten people asking me “where are you from?” when they hear me speak Spanish in public and when I say “Miami”, they reply, “But where are you really from?” It sometimes feels like you can’t win. This is also part of the “ni de aqui ni de alla.”

I think I felt the most comfortable being Cuban-American when I was a child and a teen in Hialeah. All my close friends had Cuban parents and were first-generation Americans. I did not have to code-switch with them; they understood my disparates and my Spanglish; they loved listening to Los Van Van and Broadway musical hits; we ate sushi AND congris. I did not feel like I had to negotiate my identity, nor did I feel like I had to prove myself to anyone.

There is little information about Afro-Cuban immigration in the United States, but social researchers have mentioned that since it’s a minority it has little impact on remittances and the community of black private workers in Cuba, for example. What is your opinion?

Most of those individuals were White. It’s no surprise that most of individuals who receive remittances are White. Since so much of the island depends on these, especially if they have family abroad, it creates a class of people who have access to money and resources to build and begin business. Again, most of those people happen to be White. I think it feeds the systematic and institutionalized racism in Cuba (which comes from way back in history).

During your trips to Cuba, what was your perception of racism?

I did not experience any racism based on my skin color. I have the privilege of having very fair skin. My perception of race was that there is a lot of “We aren’t black or white, we are Cuban.” I think at a surface level that phrase sounds really romantic and nice but I think it’s done more harm than good. You still have solares (tenement houses) that are predominantly Black. These individuals that suffer from greater rates poverty than areas that are white.

I spoke to Magia López and Alexey Rodríguez Mola from the duo Obsesión during my trip to Cuba with CubaOne about this exact issue. I have tried so many times to tell my father, who is Black, that racism does in fact exist in Cuba, much to his disagreement.

We also discussed the lack of black dolls on the island, except for those used for the Santeria religion. I spoke to other Afro-Cubana women who were telling me how all the Black hair care products in Cuba were targeted towards straightening their hair. This was really cathartic for me…and up until my trip to Cuba with CubaOne, I was not aware that there was a growing Natural Hair movement on the island. Even still, those two women told me that your natural is seen as being rebellious and unprofessional, which are all messages I have also heard from American society and my own family.

I think education is really the best recommendation. Knowledge is power! Even if you do not have any Black ancestors or family members, educate yourself on the history of oppression on the island. Read up on the slave rebellions in Matanzas… Africans were kidnapped and forcibly brought to Cuba in the Transatlantic slave trade.

I think a lot more can be done to bridge the Afro-Cuban and Afro-Cuban-American communities in Cuba and Florida, and I think, through CubaOne’s (upcoming) Afro-Cuban trip it will be a step towards that direction.

The current political context is no longer favorable for exchange travel and collaboration between the two countries. Still, would you continue your projects with Cuba?

Of course! We need to have an exchange of ideas to continue to grow and thrive together! I have no plans to stop visiting Cuba any time soon. My sweet grandmother, Mima, is in Cuba, along with so many uncles and cousins. I feel as though a literal part of my heart and soul is in Cuba and I am invested in sharing the Cuban culture with the world.

I think that Cuban-Americans have the right to visit their homelands and learn about their roots. No one can or should be able to take that away from us. It’s our right.