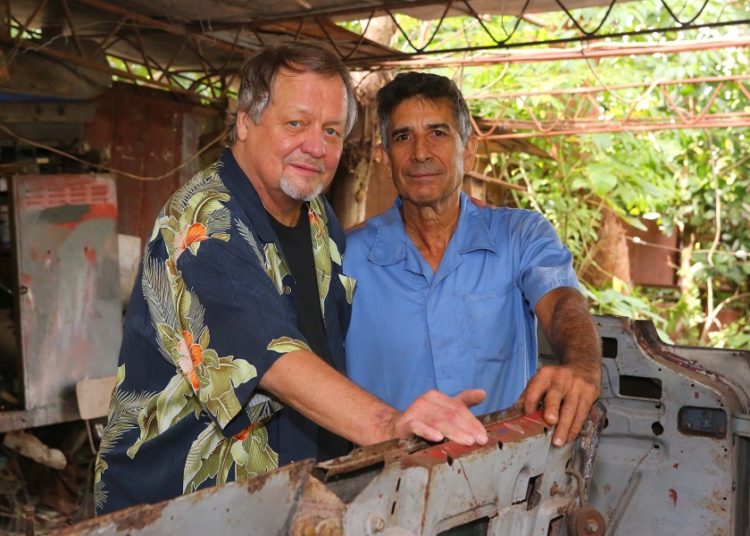 Ernest Hemingway was a hazard on Cuba’s roads. “It was noon and I was cold sober,” he once wrote to his editor, Maxwell Perkins, admitting: “Fourth bad smash in a year.” No wonder, with all that alcohol swilling around in his veins! So no surprise that in March 2011, when I first saw Hemingway’s 1955 Chrysler in Havana, it was a bit of a wreck… although, as it turned out, not because of Papa’s predilection for accidents.

After receiving his 1954 Nobel Prize, Hemingway rewarded himself with a long, low-slung Chrysler New Yorker Deluxe convertible, made to order in two-tone Navajo Orange and Desert Sand, for $3,924. One of only fifty-nine New Yorkers built for export that year, its 331 cubic inch V-8 FirePower engine with four-barrel carbs produced an impressive 250 ponies. “It was a fast, racy, powerful, macho car for a powerful, racy, macho kind of guy,” says Chrysler aficionado, Chris Paquin.

After Hemingway’s suicide on July 2, 1961, the Castro government seized the property, Finca Vigía—“donated to the people of Cuba” is the euphemism—despite the author having willed it to Mary Welsh, his widow. The Chrysler he willed to his doctor, José Luis Herrera Sotolongo. The car eventually passed to Sotolongo’s son then through various family hands until sold in 1982 to a Cuban policeman, Agustín Núñez Gutiérrez.

When, in 1994, Gutiérrez hopped on a raft for Miami, the car vanished.
Legends arose. Gutiérrez had buried the car. No, others claimed, he had secreted the car out of Cuba.
Its whereabouts remained a mystery for two decades. Then, in March 2011, Bill Greffin, of the Ernest Hemingway Foundation, in Oak Park, Illinois, contacted me with news that the Cuban government had located the car. “Do you know anything about it?” he asked.
“Yes,” I replied. Two years before, Eduardo Mesejo Maestre, director of Havana’s car museum (Depósito del Automóvil), had said to me: “The car is hidden, but it is still in the country, and restorable.”

“Just so happens I’ll be visiting Cuba in two weeks,” I told Bill, salivating to pick up the scent.
So I drove out to Finca Vigía, now the Museo Ernest Hemingway, maintained as if the great writer still lived there. As I strolled up the long sloping driveway, I passed what I sensed was the infamous vehicle perched atop cement blocks, elusive still beneath a tarp.

Ada Rosa Alfonso, the fiery yet amiable director, appeared, files in hand. “We knew you were coming,” she said enigmatically before showing me the Chrysler’s VIN placa (plate) with the chassis and engine numbers; the insurance policy that Hemingway took out, with the vehicle’s registration number; plus documents from Cuba’s National Registry of Vehicles showing a long list of owners, beginning with Sotolongo (oddly, Hemingway never registered the car in Cuba) and threading to Leopoldo Nuñez Gutiérrez (Agustín ‘s uncle), in whose leaky and humid garage the vehicle was eventually found.

I gasped. The wretched relic was far from a moveable feast. It looked like it had come from Aleppo. The convertible top and interior leather were gone, eaten away by mold. The gauges were from a Russian GAZ jeep and Lada. The dash from a Dodge. Not even the cracked windshield belonged to this Frankenstein’s monster. And the floor had rotted away completely. I peered down at asphalt beneath the car.

Unfazed, Ada Rosa told me of her plan to restore the treasured trash-heap to running condition. This would be an all-Cuban effort.  I listened to her, aware of the skill and ingenuity of the Cuban magician mechanics, but aware that the restoration of a unique model and the impossibility imposed by the U.S. embargo of importing parts to Cuba was a huge challenge.

Visitors to Finca Vigía today will see a painting—‘The Farm’—by Joan Miró hanging in the dining room, surrounded by heads of African game that Hemingway shot on safari. On my first visit to the finca in 1996, decades of grime soldered by tropical heat marked the space where the painting had hung before being loaned in 1959 to New York’s Museum of Modern Art. It never returned to Cuba. Then, in 2008, David Soul visited and was told the story. Back home in London, the celebrated actor/director (best known for his role as Ken ‘Hutch’ Hutchinson, co-star of the popular ‘70s TV cop show Starsky & Hutch) had a canvas replica made.

Then, in November 2012, Soul calls me. He’s read my book, Cuba Classics: A Celebration of Vintage American Automobiles, and wants to meet. So I fly to London, where we schmooze over beers at a pub in Swiss Cottage. He’s just returned from Finca Vigía, drawn by his insatiable affection for Cuba.
A Beverly Hills billionaire car enthusiast has purchased a 1955 New Yorker and begun shipping it in pieces to Cuba. But the U.S. Treasury Department’s Office of Foreign Assets Control (OFAC), which enforces the embargo, has shut him down.
“Here you have an American author whose car has been found and there’s a blockade in place that won’t allow people to send the parts to fix the car,” says Soul.

Ada Rosa adores Soul for having conjured a print of ‘The Farm.’ So, she’s asked him to help source the parts. He’s clueless about car restoration. But Soul is a social activist who believes the embargo is well past its used date. So because it’s the right thing to do, and because it’s his literary hero’s car, he says yes. After all, he’s now English. Living in London. The U.S. embargo can’t touch him.

“There’s a real story here and it’s got to be recorded on film,” Soul tells me. He’s partnered with London-based Red Earth Studio to produce a cinematic documentary—Cuban Soul.

Back in England, Danny Hopkins—editor of Practical Classics—leaps at Soul’s invitation to help source the parts. His magazine spreads the word. Donations trickle in: Fabric to retrim the interior… Original 15-inch whitewall tires… Custom-matched Navajo Orange and Desert Sand paint… A hand-made six-volt battery powerful enough to crank the V-8 lump… And, eventually, a gas tank hand-made to spec. Plus, Hopkins recommends a warehouse in Massachusetts that’s a veritable Aladdin’s Cave of antique Chrysler miscellany. By coincidence, the owner—Chris Paquin—is reading Hemingway’s Boat when Soul calls. He’s in! “I hope I don’t get into trouble by trying to do something good,” he says, prophetically.

Things, however, haven’t gone according to script

“Like kids at Christmas, anticipation was in the air. We couldn’t wait to open our gifts and present them to our wizard panel beater and wonder mechanic,” Soul reflects, as the crew pursues the first shipment from Massachusetts to the UK and on to Cuba. Ten weeks have passed since it arrived in Havana. But the crates are still with Customs and can’t be retrieved. Days pass as Soul & Co. pursue a Sisyphean task against invisible and immovable forces. Soul has signed a Letter of Understanding with Cuba’s Consejo Nacional de Patrimonio Cultural—its National Heritage Council—giving exclusive access to the car in exchange for supplying the parts. Yet Cuba’s lethargic bureaucracy is unyielding. Eight different ministries need to sign off before the parts are released. Ada Rosa bursts into tears as Soul’s temper flares.

“You’ve got people trying to help you, for God’s sake!” Soul stammers. “We’re trying to help the museum. Trying to help Cuba!”
Months pass. A second and third shipment are sucked into Cuba’s bureaucratic black hole. Meanwhile, the list of original parts required for restoration is like a Hydra, multiplying with every part that’s supplied. Then… Hallelujah! Customs releases the parts. But few can be used. First, other parts are needed that have still to be sourced.

Eighteen months have passed. The Chrysler shell sits in limbo.

Then Soul comes into OFAC’s crosshairs. Uncle Sam wants to see all receipts.
British citizen since 2004 (and Londoner since 1995) be damned: Uncle Sam is none-too-sympathetic. Soul’s righteous endeavor is afoul of the 1917 Trading with the Enemy Act. “The export of U.S. origin goods, car parts or anything else to Cuba, would be a violation of the OFAC sanctions,” Washington-based attorney Wynn Segall informs Soul. He and Paquin are on the hook for fines of up to $250,000 per transaction… plus a possible stint in jail. Since Soul never renounced U.S. birthrights, even his trips to Cuba are illegal.

The thaw in the decades-long freeze with Cuba initiated by President Barack Obama on December 17, 2014, is blessed relief. Travel for journalistic activity and humanitarian projects is eased. And exports for use in historical preservation in Cuba will be permitted. In late 2015, OFAC finally clears Soul and Paquin to ship parts.

Then Pedro, the chapista (panel-beater) has a stroke. He’s paralyzed down his right side and can barely talk. When I visited him shortly thereafter, he grins like a Cheshire Cat. Testament to Cubans’ indefatigable patience, resilience, and good humor. “It’s partly that spirit that drives me,” says Soul. “Hemingway speaks so much about the warmth and kindness of the Cuban people. Well, that’s what makes this embargo, this blockade, such an idiotic thing.” Soul sees the restoration of Hemingway’s Chrysler as an example of cultural diplomacy that can help suture U.S.-Cuba relations. “This project is something that has to be done. And it’s gonna pay off. It’s gonna be for a good reason.”

Unfortunately, Soul’s health, too, has taken a nosedive. ‘Hutch,’ the blue-eyed blond seventies heartthrob is now in a wheelchair. Still, in January, 2016, the film crew—accompanied by Hopkins and Paquin on their first visit—returns to Havana, Soul breathing through an oxygen concentrator.
The aging actor hobbles with the aid of a cane, Hopkins gripping his arm, as the crew descends the sloping driveway to Pedro’s home. Pedro, in his mechanic’s overalls, awaits by the gate, right arm stiff at his side. “We’re the same. El mismo!” Soul says softly as they embrace, tears streaming. Watching on, we’re all crying too.

Afternoon sunlight slants between the palms, casting shadows along the Chrysler’s grey-primed hulk. New brightwork is in place: Bat-wing grill. Twin-Tower tail-lamps. Art Deco eagle streaking over the hood. Humberto, the mechanic, has rebuilt the transmission and V-8 Hemi. All that the engine awaits are a new dynamo, starter motor, and water pump. But the list of required parts continues to grow. The paint, and several dozen mechanical parts, sent three years ago are still in their cartons: Unusable until other parts can be found or shipped.
As 2016 ticks away, Paquin whittles away at the list until finally, in August 2017, Soul solicits the Patrimonio for permission to ship a more-or-less complete inventory to Cuba. But Ada Rosa Alfonso—champion of the car’s restoration in Cuba—has been fired. Six months pass before approval is given… and a secretary tasked to communicate with Soul sits on the news for four months more. Desperate requests for updates go unanswered.

With every visit I become more disheartened. The new brakes are now oxidized. The body so lovingly restored by Pedro is rusting badly. And the new chrome sent six years ago is peeling away like scrofulous skin in the tropical mire.
“If I was of sound mind and body, well, sound mind anyway, I probably wouldn’t have ventured to do this,” Soul guffaws. Though now gaunt and weakened, he isn’t about to give up. He’s inspired by Santiago, the seasoned fisherman in The Old Man and the Sea, engaged in an epic and agonizing battle with a giant marlin far out in the Gulf Stream, displaying relentless resolve, even as his hard-won marlin is devoured by sharks before he can bring it to shore.