According to the Seventh District of the United States Coast Guard, since October 1, 2020, when the current fiscal year began, and to date 67 Cuban migrants have been intercepted in the vicinity of the Straits of Florida.

EFE
in Cuba-USA, Migrations in Cuba
0 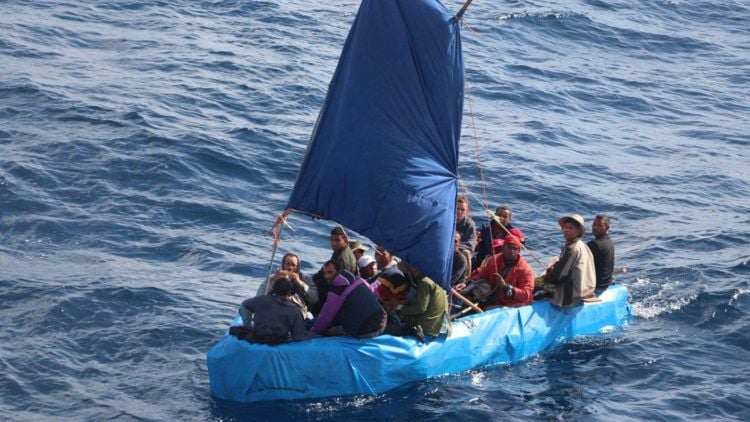 The number of Cuban rafters who try to reach the coasts of Florida in fragile boats continues to increase and in this fiscal year, the figure is higher than the entire previous period, according to official figures released this Monday to the Spanish agency EFE.

According to the Seventh District of the United States Coast Guard, since October 1, 2020, when the current fiscal year began, and to date 67 Cuban rafters have been intercepted in the vicinity of the Straits of Florida.

In the entire fiscal period 2020, which began on October 1, 2019, and ended on September 30 of last year, a total of 49 Cubans were intercepted, as confirmed by Brandon Murray, a U.S. Coast Guard spokesman.

The number reflects an increasing trend, although it is lower than the attempts made by people who left the Dominican Republic (headed for Puerto Rico), 103 so far this fiscal year, or by the Cubans themselves before the “wet foot/dry foot” policy was eliminated in 2017.

Faced with the so-called “rafter crisis,” in 1994, the now extinct “wet foot/dry foot” policy was established, by virtue of which all Cubans who arrived in the United States could legally stay in the country, while those found at sea were returned to the island.

For Cubans the door to enter the United States was open until January 12, 2017, after then-President Barack Obama withdrew their immigration benefits by canceling this policy by executive order as part of the ‘thaw’ in relations with Cuba.

In the months prior to this cancellation, there were reports of waves of thousands of Cuban migrants who jumped into the sea headed for Florida, but after it came into force the crossing of the so-called “rafters” was noticeably reduced and they became unusual.

Last Saturday, agents of the Coast Guard rescued five Cuban men aboard a small and precarious boat, who indicated that they had spent 16 days at sea since they had left Cuba.

“Each interception is almost a rescue operation,” Murray told EFE. He said he advised against these “illegal trips” that are often made in vessels that “are not even boats” and therefore are “really very dangerous.”

This month, Coast Guard agents also rescued three Cuban citizens, two men and a woman, who were stranded for more than a month on an uninhabited island in the Bahamas after being shipwrecked, and who survived by eating coconuts and rats. The three were taken to an immigration center in Florida while it is decided whether or not they are allowed to remain in the United States.

“Trips like these are never worth the risk. The waters of the Straits of Florida are unpredictable and the risk of loss of life is great in vessels like this one,” Mario Gil, U.S. Coast Guard liaison officer with Cuba, said recently.