Agents found the man, Alexander Alazo, 42, with an assault rifle and detained him without incident, police said. Investigators believe the person had been shooting at the embassy, although details about his possible motive remained unclear. 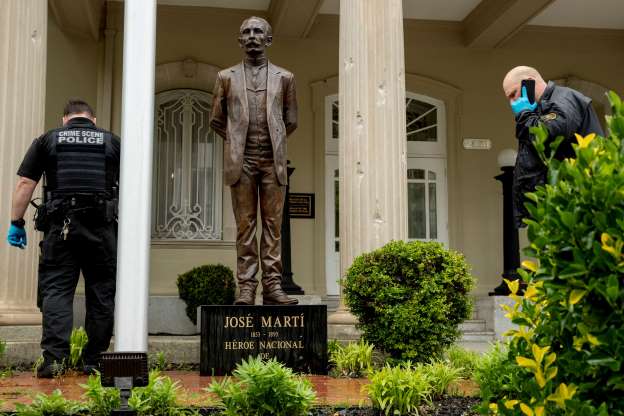 Police investigators at the scene of the events. Photo: AP.

A man armed with an assault rifle opened fire outside the Cuban embassy in Washington in the early morning hours of this Thursday, shooting at walls and columns next to the main entrance before being arrested, authorities said.

The incident began around 2 a.m. outside the diplomatic mission in northwest Washington. Metropolitan police went to the scene after neighbors reported hearing gunshots, authorities added.

Agents found the man, Alexander Alazo, 42, with an assault rifle and detained him without incident, police said. Investigators believe the person had been shooting at the embassy, ​​although details about his possible motive remained unclear.

A resident of Aubrey, Texas, Alazo was detained on charges of possession of an unregistered firearm and ammunition, battery with the intent to kill, and possession of a high-capacity magazine, a Secret Service spokeswoman said. No injuries were reported.

Alazo was still under arrest and it was not immediately clear if he had an attorney who could comment on the charges.

Images of the place published on social networks showed a group of police officers outside the embassy after the shooting and investigators searching a van parked there.

Other photos showed investigators examining damage to the facade of the building in the Adams-Morgan neighborhood, a bullet hole in a window above the front door, and damage to a flagpole and column next to the statue of the Cuban independence hero Jose Marti.

Agents from the Metropolitan Police and the United States Secret Service are investigating the incident.