This Wednesday a group of senators, congresspeople, mayors, councilors and activists gathered at the Museum of the Cuban Diaspora, in Miami, to reject any improvement in relations between the two countries. 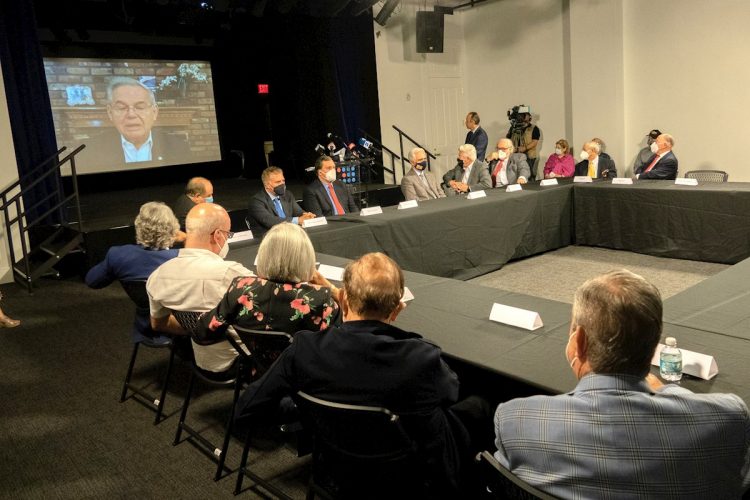 Cuban-born Democratic Senator Bob Menéndez (on screen), who chairs the Senate Foreign Relations Committee, speaks by videoconference during a press conference on a proposed U.S. policy toward Cuba, at the Museum of the Cuban Diaspora in Miami, Florida. Photo: Giorgio Viera/EFE.

Since Joe Biden arrived at the White House a month ago, Cuban exile politicians and activists have launched a series of proposals to the new president on the evolution of the ties between the United States and the island.

So far the new administration has said twice that it is reviewing those links and that any change will be conditioned by respect for human rights and the participation of Cuban Americans in the process.

So far, several proposals directed at the Democrat have called for a recovery of the thaw policy of the Barack Obama administration, of which Biden was vice president and even greater participation of American civil society. During his campaign, the current president advocated for unrestricted remittances and ties with Cuban citizens, as well as the reestablishment of consular and commercial ties allowed by economic embargo-related laws.

In this context, on Wednesday a group of senators, congresspeople, mayors, councilors, and activists gathered at the Museum of the Cuban Diaspora in Miami to reject any improvement in relations between the two countries. The activity, organized by the conservative Inspire America foundation, was presented as a bipartisan initiative, but the truth is that only one Democrat intervened in the presentation of a series of recommendations to Biden that, basically, propose to leave the active the sanctions policy implemented by former President Donald Trump.

The democrat who participated was Cuban-American Senator Bob Menéndez, who did not completely turn his back on negotiations between the two countries, but demanded “results.” OnCuba learned that two leading Democrats in South Florida, former mayor of Miami and current party leader in the state, Manny Dìaz, and federal congresswoman Debbie Wasserman Schultz declined to participate in the event.

Menéndez, the new chairman of the powerful Senate Foreign Relations Committee, sent a video to the meeting in which he essentially distanced himself from the more radical stance of the majority of those present at the activity, and did not exclusively target the Cuban government on the subject of human rights.

“As the United States strives to strengthen respect for democracy and human rights in Cuba and around the world, we must ensure that our efforts produce tangible results on these fundamental issues,” as well as “we must ensure that the conduct of U.S. diplomacy, in turn, ask and demand that our adversaries and authoritarian regimes take measures to restore and respect the rights of their citizens,” the Cuban-American Democratic senator emphasized.

Not satisfied with this statement by Menéndez, his Republican and Cuban-American colleague, Marco Rubio, estimated in a video message that the important thing is to make it clear that “any rapprochement with the Cuban regime will not change the future of Cubans at all,” since “trying to reestablish relations with (President) Díaz-Canel,” whom he called “Raúl Castro’s puppet,” “is not viable and much less reasonable considering his links with terrorist groups such as the FARC, the ELN and the narco-regime of [Nicolás] Maduro.”

Two participants in the event, who asked to remain anonymous, told OnCuba that the meeting “seemed to be more a matter of conservative commitment” than a novel political proposal. In fact, the new Republican congressman and former Miami-Dade County mayor, Carlos Jiménez, renewed as conditions to resume a dialogue with the island the fulfillment of the three postulates defined by the Helms-Burton Act: “the holding of free, multi-party elections, release of political prisoners and recovery of democratic rights.”

Keeping Cuba on the list of countries sponsoring terrorist activities was also advocated, through the voice of the director of the organizing foundation, Marcel Felipe. The activist could not be reached for comment.

The event was attended by Francis Suárez, mayor of Miami; Carlos Hernández, mayor of Hialeah, an important Cuban housing center, and other councilors of municipalities in the Miami metropolitan area, and representatives of veteran anti-Castro organizations, such as Brigade 2506, made up of Bay of Pigs ex-combatants, which reveals the position and political commitments of the participants.