Ten points that would make it possible to improve the Cuban economic design in the current conditions of reorganization. 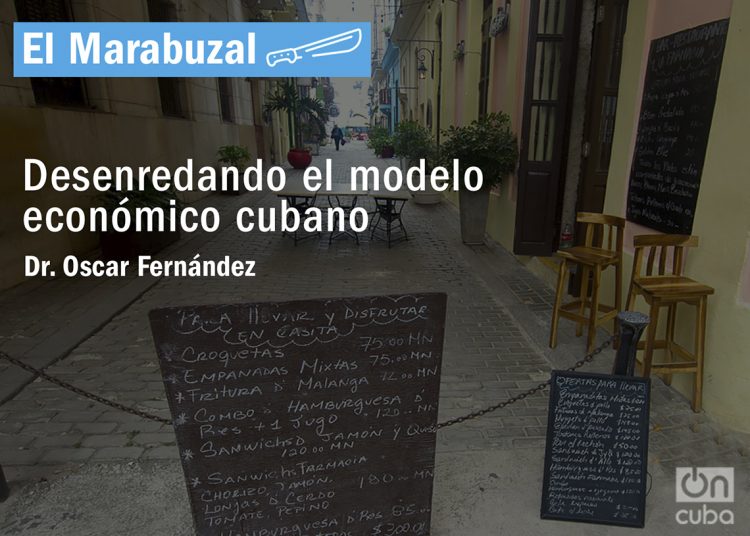 Probably in no other country in the world will its population dominate as much what is defined in its National Classifier of Economic Activities as in Cuba. The Council of Ministers has just given the green light to an important change of concept regarding the regulation of the private sector: allowing everything that is not prohibited. And for this it has used this classifier.

What was announced on February 5 should be interpreted with optimism. It is an important point in favor of this reform process that began ten years ago, and whose development has been hijacked on more than one occasion. Although the legal norm is not yet in place, a first version of the list with restricted activities has already been published.

What is the most positive in this? A much greater scope is created in the legal framework, which will allow the mobilization of productive capacities that have been underutilized until now, or that operated outside the law. If the small private sector had previously managed to develop its projects within extremely narrow frameworks, now the possibilities have multiplied manifold.

However, for this change to really allow the deployment of all our economic potentialities, and not only mean a temporary response to an acute employment crisis, there are immense obstacles to overcome, which also imply changes of concepts.

Ten points that would make it possible to improve the design:

The main reason why the government is reluctant to do so is probably fear of the drain of skilled workforce from the state sector to the private sector. However, this logic underestimates that the greatest threat lies in the net undercapitalization suffered by the country as a result of emigration, or when many of these professionals are hired by foreign companies to work directly from their homes. Obviously, it is preferable that they contribute their expertise from their own projects before they are lost to the transnational service. On the other hand, this fear should not be harbored since, on the one hand, a general reform of prices and wages is underway, whose declared objective is precisely to reorganize the inverted pyramid and become a stimulus for the retaining of the best professionals, and on the other hand, the context is the least conducive to abandoning the security of state markets to undertake an uncertainty. What might happen is that many of them would stay in their positions while trying to carry out their own projects in parallel.

The evolution of the economic model in Cuba—recent and not so recent—has experienced brutal ups and downs in terms of its conception of the private and cooperative sector, as well as the role of the market. The government must find a way to offer guarantees that this regulatory framework that is being created will not be reversed within a couple of years. That the regulation to be issued has the status of a Law, approved in the National Assembly, or at least as a Decree-Law, perhaps providing greater security. Only in this way will the ventures that emerge would bet on productive projects of greater importance—which generally require more time to mature and represent a greater investment—instead of undertaking ventures with a rentier or filibuster approach.

This was announced by the three ministers at the Mesa Redonda TV program on February 9. But when analyzing the recent behavior of the administrative bureaucracy in charge of implementing, it is not possible to sleep with only this statement. The legal norm must be explicit. Any project that requests to operate in unrestricted activities and meets the requirements established by law must be approved automatically under the previewed terms. As long as an official or commission is given decision-making power based on judgment rather than rules, there will be plenty of room for corruption.

In a context of acute crisis, with the enormous number of economic victims as a result of the pandemic, and in the prelude to a necessary adjustment of employment in the state sector, it is urgent to promote productive activity. For this, we need an expansive tax policy. This implies designing adequate exemptions for all those activities that generate productive employment. In many countries, exemptions of between 1 and 3 years apply for new ventures. In short, a good productive stimulus will then result in an increase in tax collection.

Make no mistake: many ventures will emerge. Most of them will find ways to finance themselves. If the state commercial bank—be it with its own resources or by establishing foreign alliances—does not create financial products that are truly tempered to the needs of these businesses, it will again be out of this market, as has happened since 2011. The quality of financing together with the stability of the regulatory framework are determining factors for the success of ventures.

“The economy is one,” said the Minister of Economy. Indeed, the only possibility to develop the economy harmoniously is based on building a coherent and highly interconnected productive fabric or ecosystem. There are known small enterprises that have been key in solving important problems in a state industry. But there are still provisions emanating from some OSDE1 that prevent their enterprises from creating alliances with the private sector, even in frank confrontation with higher-ranking provisions. This practice has to definitely disappear. This Cuba needs state, private, cooperative, foreign and joint ventures, cooperating and competing in the production of socialist development. And the State must and can implement it.

This probably constitutes the main weakness for the development of productive private projects. The current regulations that allow self-employed workers to import inputs only through state enterprises, make up an essentially rentier environment, not only because it guarantees a captive market for designated intermediaries, but because it requires payments in freely convertible currency for these services, not always attributable to foreign exchange expenses corresponding to the process itself. On the other hand, the universe of enterprises authorized for foreign trade is also limited, and with “distributed” areas of specialization. In this way, the monopolistic structures that have traditionally supplied the state sector with an efficiency far from that desired are perpetuated. However, the more the linkages between state enterprises and private enterprises advance, the more opportunities will arise to satisfy certain demands for mutual inputs. Facilitating legal avenues to access freely convertible currency, as soon as macroeconomic conditions allow it, is another essential issue for the replenishment and therefore the survival of these ventures.

Competitive market structures must be promoted in the spaces that the design of the economic functioning model sets aside for commercial relations, always much fairer and more socially efficient. The prohibition, for example, to organize certain tourist activities, is only explained as an entry barrier to protect the market shares of the agencies that operate today. If we already accept that the conditions in the current stage of the socialist transition require the recognition of these commercial spaces, it is necessary to adopt all measures to guarantee their proper functioning and minimize their social costs. Learning to manipulate market conditions in such a way that it is possible to direct them towards the objectives of systemic reproduction is one of the main challenges. Institutions in defense of competition are required in these markets, to try to neutralize the negligible oligopolistic behaviors, which both damage the welfare of the final consumer and which prevent the emergence of new and perhaps better entrepreneurs.

We are facing a new opportunity to rectify the mistakes of the past. An opening to the private sector, without being accompanied by specific policies that allow greater empowerment of those sectors or groups of people that—according to numerous studies—were already at a disadvantage and also fell back during the last ten years of reform, would certainly deepen the gap. Measures should be articulated to encourage projects led by women, by the Afro-descendant population, by single-parent families, by families with many dependents, by the disabled, by retirees, among others. Social policy cannot be subsidiary or corrective to economic policy, it has to be imbued.

Let’s start with the most basic, the Labor Code. What regulation, institution, mechanism, union, or other, must be created, transformed or dissolved to guarantee that employees in the private sector effectively enjoy the rights established by law? Who demands the employer, who protects the worker? Perhaps leave all the responsibility to the labor courts? Then, through what mechanisms does the State promote a socially responsible business culture, consistent with the socialist project? The latter, perhaps, are one of the most overdue issues of the reform.

Other topics can surely be added to this starting list. For example, the creation of some type of effective trade union association, with the capacity for dialogue and counterpart, is essential for governance and conflict management. The creation of a kind of Promotion Institute, dedicated to the study of the private and cooperative sector, which contributes to coherence in the design of stimulus policies, could also be useful. The annual publication of a kind of portfolio of opportunities for the domestic private sector, similar to that carried out by the MINCEX for foreign investment, in which the territorial and national priorities are made explicit, could help better orient efforts and shorten the path towards the necessary solutions.

Lastly, with the implementation of this so-called “negative list” the government has the opportunity to test the mechanisms that would operate for the upcoming SMEs. The formalization of these should not delay either, but in my opinion, progress should be made with equal speed in the ten aspects mentioned above. However, a radical transformation in the management model of state-owned enterprises that exposes them to market conditions and forces them to innovate or perish, continues to be the defining move for the full development of our productive forces. The reorganization is an essential step but it is not the main obstacle.