This Friday there was a peaceful protest and a meeting between animal protectors and representatives of the Ministry of Agriculture, in which officials “ratified the will that a higher-ranking legal regulation that promotes animal welfare be approved this month and in which all the concerns and requirements of animal lovers in Cuba are collected and considered.” 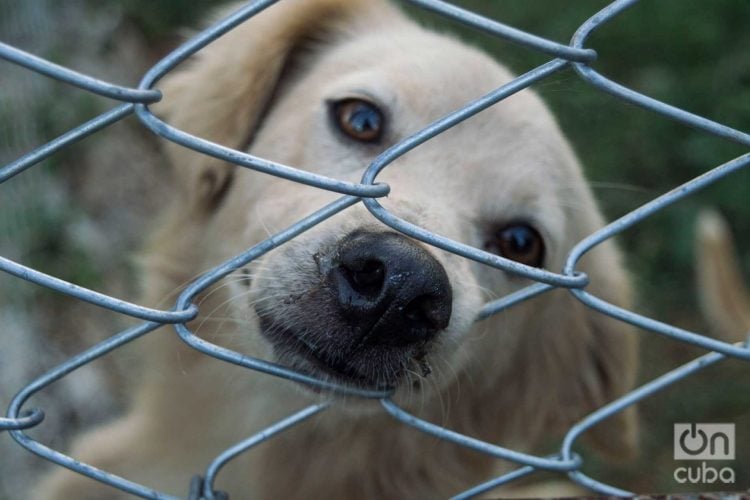 The Ministry of Agriculture of Cuba (MINAG) confirmed this Friday that the expected decree-law on animal welfare should be approved in the current month of February, due to the claims and fears of animal groups that the regulation will be postponed again.

This decree-law was initially scheduled for last November, but was finally changed for February as part of the readjustments made in the island’s legislative schedule due to the coronavirus pandemic. However, no mention of it was made at the meeting of the Council of State—the body in charge of its approval—held this Tuesday, when three other decree-laws were approved.

The above set off the alarms of activists and animal protectors, a group of which held a peaceful demonstration this Friday outside the headquarters of MINAG, as a result of which it was received by several of its authorities. At the meeting, the animal protectors—mostly young—presented their complaints and criteria to the officials, and the latter “ratified the will that a higher-ranking legal regulation that promotes animal welfare be approved this month and in which all the concerns and requirements of animal lovers in Cuba are collected and considered,” according to a note published by MINAG after the meeting.

In its communication, the state entity affirmed that the meeting was held “as evidence of the commitment of the Cuban government and state to give the population participation in the construction of the country’s public policies” and pointed out that it “took place in an environment of respect and understanding between both parties.” First Deputy Minister Ydael Pérez Brito, the director of Animal Health, Yobani Gutiérrez Ravelo, the legal director of MINAG, Orlando Díaz Rodríguez and the head of the Independent Department of Communication, Luis Montero Mustelier, exchanged with the animal protectors.

“Topics such as animal abuse, regulations on veterinary care, sanctions contemplated for prohibited fights with the intervention of animals, the conditions of veterinary clinics and offices, aspects that coincide with concerns expressed by other animal lovers in previous meetings and in the opinions expressed through the consultation that was made through established channels and that have been contemplated in the new regulation were discussed at the meeting,” the note states.

In addition, in its social networks the MINAG affirmed that the regulation on animal welfare “is a matter of national priority” and “is on the legislative schedule” and confirmed that it had communicated today to animal protectors that its approval “will take place this month of February.”

In its note, the Ministry of Agriculture recalled the call made last year “to the general population to legislate on the subject, a context in which,” it said, “opinions and suggestions have been received through the website and all channels such as social networks and institutional emails.”

“Many of these issues have been included in the new decree-law,” the note says, according to which “in that process more than two thousand comments were received through different channels,” while “MINAG authorities and specialists have held meetings with anyone who has had any concern in this regard,” among which, it states, “all have expressed their opinions and concerns, concepts and definitions have been clarified and they have referred to the importance of having a legal body that establishes regulations on the behaviors and actions of people in their relationship with animals.”

For their part, activists who went to MINAG this Friday appreciated the opportunity to exchange with the authorities and have insisted that their action does not follow a political agenda but is the result of their love for animals and impunity in the face of the mistreatment of many without there being yet a legal way to protect them. The case of Pasitos, a dog that died this week victim of abuse and whose death outraged the animal protectors’ community, was a strong motivation to insist on their demands.

“The Pasitos case was the trigger for today’s action. We did not want to wait another minute to ask for justice, so that something is done against such criminal acts, and, logically, justice could not be done if the Decree-Law on Animal Welfare has still not been approved,” Enma Silvente, one of the animalist lovers participating in the protest and in this Friday’s meeting, told OnCuba.

Enma described the dialogue held at the MINAG as “very productive” and said that “thanks to the cordial and respectful meeting, we were able to raise many concerns.” The meeting took “almost three hours,” she said, “with questions and answers, because they (the officials) took all the time to explain to us step by step all the work done to get to the point of being able to approve the decree-law.”

“They explained to us that the president (Miguel Díaz-Canel) himself last year was the one who told them that the issue of animals had to be given the importance it deserves. It was very good to hear that the penal code will take into account sanctioning dog fights, animal abuse, everything related to animals and personal enrichment, also for example in the case of coachmen who mistreat their animals with many hours of work, their animals will be confiscated, the same with those who use animals to work in the fields,” she said.

For her part, another animal rights activist, Keila Torres, acknowledged on Facebook that she had gone to MINAG in fear of possible reprisals, but said that “my patience was running out since half of February had gone by and there was no means to report these barbarities (such as the death of Pasitos).” “Uncertainty has never been something that is well digested when you have to cry for an animal every day,” she said.

The young woman said that the concerns of the group of activists who went to the MINAG “were heard” and that the dialogue held with the officials was “diverse, cordial, firm, insistent, sometimes disorderly, with anecdotes, proposals for solutions…just like each one of those who were present.”

“We were promised not to distort the dialogue held to discredit us,” she added, later clarifying that “today, it does not rhyme with ‘financing,’ ‘mercenaries,’ etc. It rhymes with LOVE, PASSION, CAUSE, JUSTICE.”

In recent years, Cuba has seen how a movement of activists in favor of animal welfare has grown, demanding regulations to protect pets, work animals and those used as food for humans. This movement has gained visibility both on social networks and in the streets, where in addition to actions related to health, protection and adoption, until recently unprecedented events have taken place in Cuba, such as a march authorized by the government and peaceful protests before state entities.