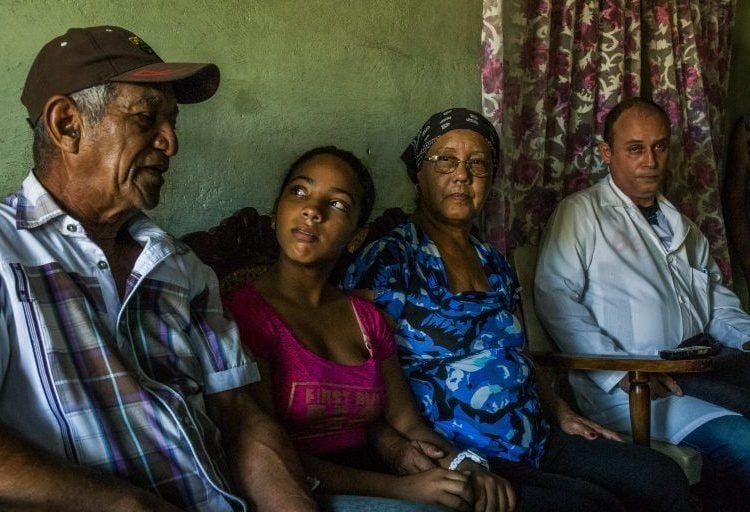 Relatives and friends of Cuban doctor Assel Herrera, kidnapped in Kenya. From right to left: Antonio, the father, Dianelis, the niece, Ada, the mother, and Dr. Eduardo Ramón Vera, childhood friend of Assel in charge of providing direct medical attention to the family in Delicias, Las Tunas. Photo: Itsván Ojeda/Cubadebate.

In spite of the hard time they are going through, the relatives of the Cuban doctors kidnapped last Friday in Kenya trust that they will be able to return safely to Cuba.

“I have full confidence that sooner or later my son will return to the bosom of his family,” said Martha Hernández, mother of Villa Clara surgeon Landy Rodríguez, in statements published by the island’s media.

Even in the midst of the anguish of the last days, in which, as she said, she has barely been able to sleep, Martha said she trusted the island’s government, which has maintained a “constant follow-up” with the Kenyan government and “is working tirelessly” for the return of the doctors, as Cuban President Miguel Diaz-Canel tweeted on Sunday.

In addition, she thanked the solidarity received both inside and outside of Cuba, which she considered very important so that this unfortunate chapter could best come to an end.

On Friday, when the news of the kidnapping was announced, Isel González, wife of the father-in-law of Landy Rodríguez, also thanked OnCuba for all the support received and that which could be given, which contributes to the return of the Villa Clara doctor and his colleague Assel Herrera, from Las Tunas.

For their part, the parents and other relatives of Herrera, in the Las Tunas town of Delicias, affirmed that they do not feel alone at this moment, given the enormous support they have received from authorities, neighbors and Cubans in general.

“We are all united,” said Ada Correa, Assel’s mother, quoted by the Cubadebate website.

Ada and the rest of the family receive special medical and psychological attention to deal with stress and maintain emotional stability in the face of an extreme situation such as the one they are living.

The kidnapping of the two Cuban doctors took place on Friday in Mandera, a county in the northeast of the Republic of Kenya bordering Somalia, where they were stationed.

The attackers, allegedly members of the Somali Al Shabab jihadist group, blocked the official vehicle with two cars and opened fire, killing one of the police officers accompanying the doctors, while a second officer was able to escape alive.

Herrera and Rodríguez are part of a contingent of 100 Cuban doctors who arrived last year in Kenya under an agreement signed between the two countries to improve access to specialized medical services in the African nation.

After their arrival in July last year, they both had expressed doubts about the safety of their new destination in an interview with Kenya’s Citizen TV.

According to a police source, the information known so far indicates that the doctors were being held in El Adde, in the region of Gedow, Somalia.

A search operation by the Kenyan authorities is under way at the moment, while a group of elders from the town where the doctors worked had crossed into Somalia to help with the negotiation.