Only 1,000 dollars per person can be sent quarterly and new restrictions will be placed on non-family trips to Cuba, as announced by Bolton. 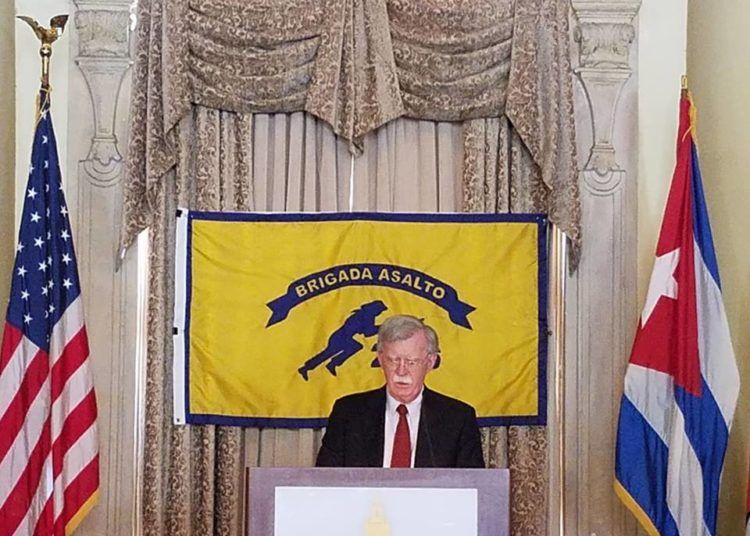 National Security Adviser to the White House John Bolton said today from Miami that the measures officially announced this afternoon “are just the beginning” and that the United States will continue to support the peoples of Cuba, Venezuela and Nicaragua.

The official, who did not indicate starting when these measures would take effect, announced two new restrictions regarding Cuba, one related to limiting remittances to the island and another to travel to Cuba. Regarding the sending of money from the United States, the amount will be restricted to 1,000 dollars quarterly per person.

The Obama administration had eliminated the limit of money transactions to the island. Remittances to the island from the United States amounted to 3 billion dollars in 2016, according to the State Department.

“We are announcing that the Treasury Department will implement regulatory changes to restrict travel to Cuba for non-family reasons,” said Bolton.

Likewise, he announced that five Cuban military companies, including Aerogaviota, will be added to the list of entities with which “direct financial transactions are prohibited” due to their links with Cuban military personnel and services.

Hours earlier, Trump’s security adviser had written on his Twitter account, regarding the administration’s decision to enforce Title III of the Helms-Burton Act: “This decision serves as a warning to the Cuban regime that we are willing to take responsibility for their violations of human rights and the continued repression of the Cuban people. We will always fight for the freedom of the Cuban people.”

In another tweet he defined this step as historical.

The Trump Administration has taken historic action to no longer waive Title III of Helms-Burton today, and stood up for Americans who have been victims of the Cuban regime’s larceny.

This afternoon’s announcements in Miami were made during a lunch organized by the Assault Brigade 2506, composed of a group of anti-Castro fighters of the so-called “historical exile,” veterans of the Bay of Pigs invasion in 1961 and new members representing the hardline wing opposition to the Cuban government from the United States.

Under the thunderous applause of those present, John Bolton affirmed today that the Monroe Doctrine “is alive and well.”

The idea that with these new measures the United States is opening a Pandora’s box, at least potentially, is consensual in Europe. Indeed, there is the possibility that it triggers a chain reaction of mutual lawsuits whose results could be unpredictable.

For example, Spanish businesspeople would be the most affected. An article in El País refreshed the fact that in Cuba, 71% of the rooms controlled by foreign chains are in the hands of Spanish investors. And that this country’s investment in Cuba exceeded 300 million euros per year.

El País also recalled that the demands presented in the WTO stood at around 6,000, but they were frozen by Title III’s postponement ―which has just been rolled back.

In fact, as academics and experts of diverse orientations have warned, any country that has an economic relationship with Cuba or wants to develop one with Cuba will react negatively, as already happened in 1996. The measure damages relations with nations such as Mexico, Canada and other U.S. allies, in addition to China, Russia and Vietnam, among others.

Among the reactions to the announcements the Center for Democracy in the Americas, a nonprofit organization founded in 2006 which has organized more than 70 trips to Cuba for bipartisan delegations of members of the U.S. Congress to Cuba, today issued a statement in which it again criticizes the course of this policy of the Trump administration against Cuba.

“Our policies towards Cuba have been wrong for a long time, but despite that, and despite a history of 60 years of failures, this administration is doubling the isolation and, in doing so, is causing great pain to the people of Cuba. Today’s announcement is more of the same, waiting for a different approach. “

“The polls are clear: Americans want to travel to Cuba, want to explore business opportunities and want to do so without fear of reprisals from their government. In addition, Americans are excellent ambassadors for democratic values.

“It is clear that sanctions against Cuba harm U.S. companies, endanger our bilateral cooperation on national security and damage the Cuban private sector.

“Setting limits on remittances is petty and can only be understood as an attempt by the government of the United States to create economic difficulties among Cubans.

“The enactment of Title III will not solve the problem of property claims in Cuba; it will make matters worse. The claimants will fight to receive sentences of cases filed in U.S. courts, and the measure will complicate future diplomatic discussions.

“Ambassador Bolton’s speech combined Cuba with Venezuela and announced a policy approach that does the same. The two countries are different, they are living very different times, and to exploit events in Venezuela to settle Cold War scores with Cuba is a distraction from the real needs in Venezuela.

“At a time when the United States deeply values ​​multilateralism in Venezuela, it is difficult to understand why it would threaten to alienate foreign partners such as Spain and Canada with its Cuba policy, especially with so few possibilities of achieving the established objectives.”

James Williams, president of Engage Cuba, has circulated a statement stating that “President Trump is doing this for a reason, and only for one reason: to appease the hardliners in South Florida before the 2020 elections.”

“The only way to get what property claimants deserve is through diplomatic negotiations, which President Trump has just got rid of at the table,” he said.

“The hypocrisy of the Trump administration that gets close to the most brutal dictatorships in the world in Saudi Arabia, Russia and North Korea, but that claims to be concerned about democracy and human rights in Cuba, is like living in a parallel universe. President Trump himself tried for years to open a Trump hotel and a golf resort in Cuba.”