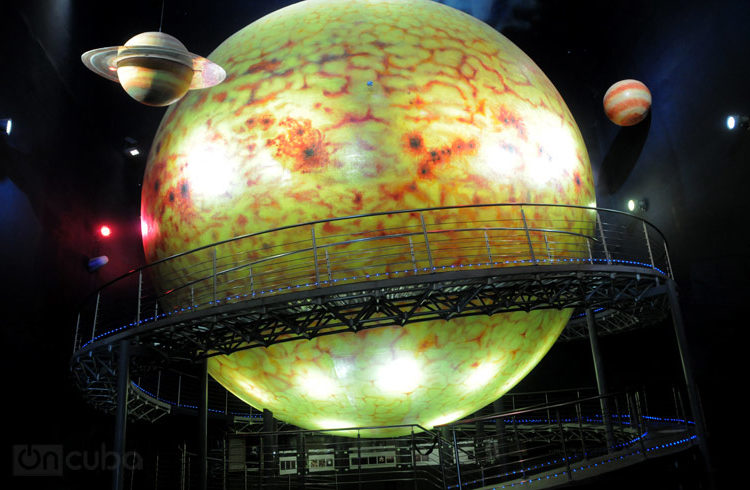 “Yes, good morning, tell me.” It’s Monday, the day of booking, and the phone has not stopped ringing at the Planetarium of Old Havana. The tours will begin on Wednesday, as usual, so there is time before the place is full of kids wondering why Saturn has a hula.

Then it’s all calculated, clever, with cosmic precision for Dominique Ballereau, astronomer at the Paris Observatory, Astrophysics to begin his course. This is the third edition, continuity of the previous two: Solar System, Stars, and now Milky Way. “It’s always a great pleasure to be here with you,” says the professor, and thanks the Institute of Astronomy and Geophysics (IGA) for the invitation.

Engineers, cyber and physics scientists make up the audience, almost all young, will fall into place in the theater space, a site with reclining seats-exactly what they needed to look at the sky, located within the planetary sun.

The professor announces the agenda: dimensions and mass, kinematics, radial velocities, the overall galactic rotation curve, interstellar matter, the super-galactic disk; formation, magnetic field and chemical evolution of the galaxy stellar nature of the population … “Well, the menu suits you?” jokes in his clear Spanish.

Adolfo Mendez, head of the Department of Astronomy of the IGA, says that this academic exercise will allow the boys to get credits for future masters courses. “In any Cuban university astronomy is taught, and so we took the opportunity for them to receive professional training.”

In the 1970s astronomy was a subject in pre-university education, but then the subject disappeared from the curriculum. “Our training has been self –given, says Mendez, and this type of course fills an important gap.”

“To this Planetarium staff is added, Taymi Garcia, director of the institution, says. For us it is difficult to achieve the training of technicians and specialists, this is a complement to their everyday work. ”

Maria Elena Muniz, specialist in the Department of Space Geophysics, notes that the IGA has cooperation agreements with Mexico and the Institute for Theoretical Physics of Trieste (Italy), which also provide space for improvement. “But these classes allow us to train more professionals while the other way it would be a single person.”

If anyone still believes that scientists are cold enough to hear Dominique’s enthusiasm will convince him otherwise. “A galaxy evolution is constantly renewed. If we look in 100 million years, everything will be totally different. ”

And he does not miss a bit of poetry: “It is difficult to know the exact structure of our galaxy, because we are in, like a jungle seen from the inside.” And the mystery, of course, because only a part of the Milky Way where we are is known. “The other side is hidden: there are so many stars, clouds and dust, we can never see what’s on the other side of the center of the galaxy.”

It was in 2012, during the ninth Latin American Conference on Space Geophysics (COLAGE), held in Costa Rica, where the idea of offering courses emerged. Since that time the French researcher has come every year. Through him working relationships are maintained with the Paris observatory, where opportunities exist for postgraduate and doctoral courses for Cubans, says the engineer Pablo Sierra, a specialist in the Department of Astronomy of the IGA.

The yellow and red stars are the oldest Dominique continues: and its composition is mainly metal. Also there are some blue..

Many associate the study of the cosmos with an image to Discovery Channel: ultra-powerful telescopes, giant computers, pinpoint accuracy … In that cartoon Cuban astronomy would not fit, marked, like the rest of our “universe” by economic hardship.

And yet it moves: the IGA has a work of 50 years, with extensive research on space matters, journal publications, and national awards from the Academy of Sciences. The Latin American Association of Space Geophysics was created in Havana, during the third edition of COLAGE, in 1993. In other words, while it seemed that the country was going to the basement, there were people thinking beyond the atmosphere.

Dominique says no, that Cuba is not the best place for stargazing. Excessive humidity and it lacks high mountains. A Caribbean island is always disheveled with clouds, threatened by winds and cyclones. What are you going to do?

“We have a technological development according to national possibilities ‘, says Mendez, but we do solar radio astronomical observations, and other. Right now we are setting up new technologies at the Institute, with the help of these guys. “Through international collaboration we have acquired more modern equipment, they have been given us “a break” from the material point of view. “Not enough, but better than we were a few years ago,” says Muniz.

The course lasts 10 days, so all will move into the Casa del Conde Cañón, in Old Havana as well, when on Wednesday the Planetarium opens. And do not get discouraged: to watch the constellations, the professor advised, “If you wake up early, four or five in the morning, and look west, you may very well see Orion and the Pleiades. At that moment Cuban skies are very clear.”