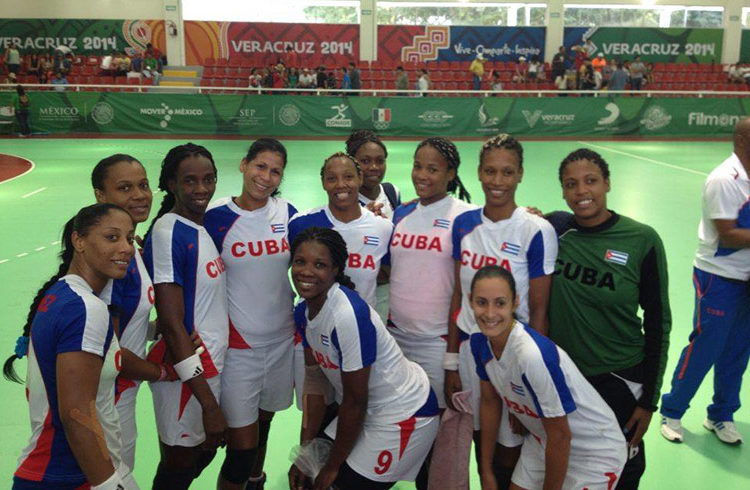 Cuban women handball did not disappoint pre-competition forecasts and grabbed the gold medal at the XXII Central American and Caribbean Games 2014 Veracruz, defeating Puerto Rico 32-18 in the final, predictable outcome for a team that all along the tournament proved unstoppable.

Directed by Lorenzo Maturell, they dominated undefeated the qualifying stage in the key A with three wins and overall 144 goals scored by 35 allowed, figures that instantly placed them as top favorites for the crown.

Computing the five games held by each team throughout the tournament, Cuban collectively showed greater effectiveness in attack, averaging 73 percent efficiency at 280 shots on goal (they scored 204 goals, averaging 40 goals per game), besides being lethal in the counterattacks by completing 29 of 31 turnovers and making 186 assists.

As if having a highly tune-up offensive machine were not enough, also Cuba was the best team in the qualifying in turnovers, one of the strengths of this team able to grab 162 balls and block 18 times their opponents .

In defending the goal the responsibility fell mainly on Eneleidy Guevara, although Marinés Rojas also saw action and made it at a high level. Our goalkeepers had the best results in stopping 68 of 148 shots that their opponents managed to take (an astonishing average of less than 30 per game, thanks without a doubt to the iron work of the Antillean defensive line).

The individual leaders, could not be otherwise, were also Cuban. Gleinys Reyes crowned as top scorer with 38 goals, followed by her companions Maricet Fernandez and Lisandra Lussón with 32. Lussón led too with 45 assists for 34 Ayling Martinez, who was second.

As for the most outstanding on the offensive, statistics that measures the participation of a player in goals scored for his team by adding assists and individual goals, the Cubans shone headed by Lussón (first also in blocks), who intervened in scoring 77 (45 goals + 32 assists) and was seconded by Fernandez (30 + 32) and Martinez (28 + 34), the latter at the head of the recoveries of balls.

If we stick to the figures it seems that there is little more to say about the Cuban players. Except that some data could magnify the regional victory in these games.

Handball in Cuba today is almost a laboratory experiment, isolated from the major world powers and very limited international participation throughout the year. However, this time a generation of players with prodigious physique and great skills has grown in the island at and already aroused the interest of Europe.

Proof of this is that a few months ago the team Vipers Kristiansand, belonging to the First Division in Norway, was in Havana to train with the national team. After the two games they held, its director Gunnar Peterson praised the offensive power of the Cuban and the pressure of the defense.

Therefore, we shouldn’t be surprised if by taking advantage of the relaxation of recruitment policy of athletes, some of these girls soon would make career in Europe, the site where the highest level of the sport on the planet today is played and perfect place to raise the finest real possibilities of this group of talented handball players.

Currently the competitive roof in handball inside Cuba is the Elite League, an event that brings together the top six teams in each gender for one week to discuss the national scepter and which is classified as short-term zonal competitions. This, you don’t need to be a rocket scientist, is insufficient.

Perhaps that is why our players and their technical teams have opted for an enviable physical training in order to fill gaps that come with the limited international experience; an approach that has already been evident in Veracruz, is paying off, at least in the area.

Veracruz has been a showcase, the first real show of strength of these girls who dream of adding new titles to their shelves. Raw material for this there is in abundance.