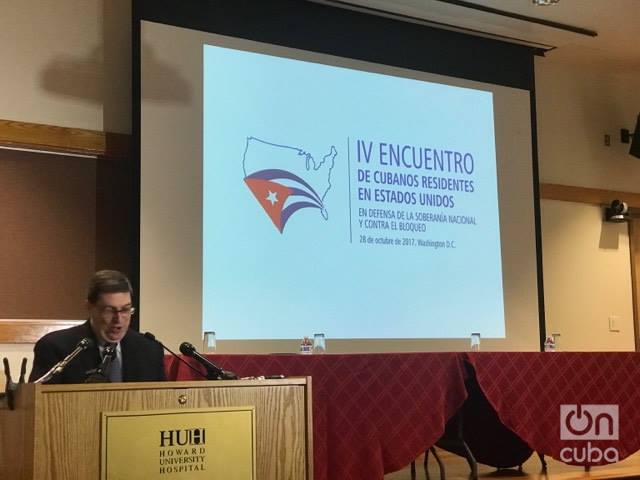 Cuban Foreign Bruno Rodríguez has just announced in Washington a package of measures that benefit the Cubans residing abroad.

The changes, which will come into force starting January 1, 2018, are the following:

1) eliminate the “Authorization” on the passport for travel to Cuba by Cuban émigrés.

2) authorize the entry to and exit from Cuba of Cuban residents abroad in recreation vessels through the Hemingway and Gaviota-Varadero International Tourist Marinas. Once the conditions are created, it would be gradually expanded to other marinas.

3) allow the entry to Cuba of Cuban citizens who left the country illegally, except for those who did so through the U.S. Naval Base in Guantánamo.

4) eliminate the requirement of resident so that the children of Cubans residing abroad, who have been born in other countries, can obtain Cuban citizenship and their identity document.

“The U.S. government closes and Cuba opens,” said the Cuban foreign minister at the end of the communiqué.

Rodríguez announced these measures at the 4th Meeting of Cubans Resident in the United States, which is being held today in Washington.

The different legal regulations that will accompany the implementation of these measures will be published son in the Gaceta Oficial and the population will also be given additional information about the procedures that will come into force.

As was announced, the permit to enter Cuba for those who left the country illegally has only one exception – those who did so through the Guantánamo Naval Base. This supposes that the doctors, athletes and other professionals who left their missions abroad would be able to enter Cuba unhindered starting 2018.

In relation to the so-called “Authorization” stamped on the passport, its elimination responds to old demand by the Cuban diaspora that could benefit more than 800,000 émigrés. In practice it means that starting January 1 the permit that the island’s government demanded for all Cubans residing abroad to be able to enter the country will no longer be necessary. This does not commit the process of passport renewal, required every two years.

Meanwhile, the “residence” was a procedures included in the Immigration Law that demanded that the children of Cubans born abroad spend at least three months in Cuba to opt for citizenship. Its elimination make this intermediate step ineffectual and facilitates the conversion into citizens of the island for second generation Cubans.

Hugo Cancio, president of Fuego Enterprises and general director of the OnCuba platform, considers that it is a “huge step in the process of normalization of relations between Cuba – my country of origin – and the diaspora. This brings down a wall, an enormous barrier in these relations from the psychological point of view and especially of each Cuban citizen’s right to return to his or her country of origin without having to ask for a permit. That is to say, the entries to and exits from Cuba are not a privilege: they are a right. There’s still a long road ahead.”

1. Hugo Cancio and Bruno Rodríguez in the 4th Meeting of Cuban Residents Abroad, today in Washington.

Hugo Cancio and Bruno Rodríguez in the 4th Meeting of Cuban Residents Abroad, today in Washington.