So far this week, the United States has returned to the island 29 rafters trapped on the high seas. 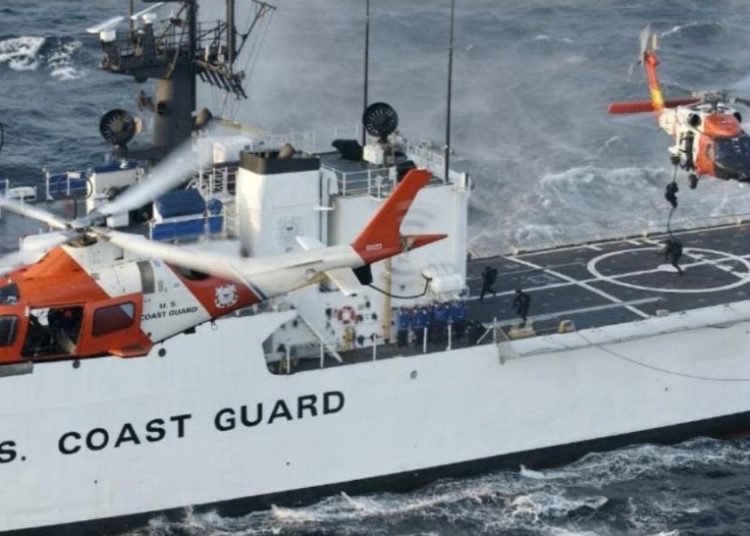 A Coast Guard cutter and two helicopters during an operation in the Caribbean. Photo: USCG

Two Cubans died and another 10 disappeared this Thursday after the boat on which they were sailing to the United States capsized off Key West, Florida. Eight others survived and were rescued, the U.S. Coast Guard said in a statement.

A Coast Guard cutter was on patrol in the area, about 16 miles southwest of Key West, when it found the survivors in the water at around 1 p.m. Thursday, Coast Guard spokesman José Hernández said in an interview this Thursday night with ABC.

It’s not clear what type of vessel the 20 people were traveling on. “We didn’t see any boats. The survivors were found in the water,” said the spokesman.

On the other hand, Sheriff Rick Ramsay, of Monroe County, south of Miami-Dade County, affirmed in a text message, also Thursday night, that originally 20 Cubans were on board the ship that sank, but that he had no more data and that the team of investigators was in the preliminary stage of their work.

On the morning of this Friday, the Coast Guard spokesman confirmed to OnCuba that the searches continued throughout the morning without locating more survivors. “We’re looking for 10 people who would still be in the water,” said Petty Officer Hernández.

The survivors said they had left this Sunday from the port of Mariel, located on the Cuban north coast, and that the boat capsized on Wednesday night. The following night they were aboard a Coast Guard ship, where they received food, water and basic medical care.

Two cutters, several smaller boats and two helicopters from the Key West Coast Guard station are participating in the searches.

Just 90 miles from Cuba, the Florida Keys continue to be a frequent destination for Cubans trying to reach the United States through the Straits of Florida, but because of the strong currents in the area, the Coast Guard constantly warns of the dangers of making the trip.

On the other hand, in a separate episode this Saturday, someone called authorities to alert them to nearly a dozen people aboard a raft on Marathon Key, about an hour north of Key West. When the Coast Guard got to the boat they found that one of the Cubans on board was already dead. His son reported that the raft had overturned at the beginning of the trip and that they lost food, water and medicine.

The United States Coast Guard has intercepted nearly 300 Cubans at sea since the start of the fiscal year in October, the agency said. This is the largest increase since 2017. Last fiscal year, only 49 Cubans were located trying to migrate to the United States.

The number of Cubans who tried to reach the United States increased during the Obama administration. In the last year of the Obama presidency, 5,396 were intercepted.

In turn, this Monday another 21 Cubans were returned to Cuba, and the scene was repeated on Thursday with the repatriation of another eight found aboard a rustic green raft.

“Migrant interdiction patrols help save lives by deterring the dangerous activity of illegal migrants and moving migrants out of dangerous environments,” said Captain Michael Gesele, chief of surveillance for the Coast Guard’s Seventh District, based in Miami Beach.